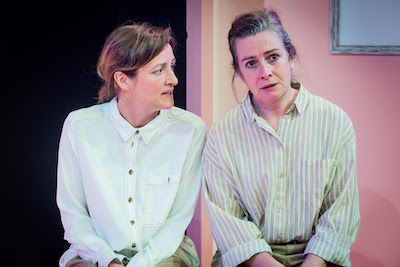 “When the facts that you think you know turn out to be lies it’s a little like an earthquake…. These buildings need to be rebuilt from the foundations. Proper facts… Solid enough to build a Life on.”

Maud Dromgoole’s startling new play is inspired by the story of Mary Barton and her husband, Bertold Wiesner who used the latter’s sperm to artificially inseminate up to a thousand women before destroying the evidence.

Now you can only guess at what made the Wiesners want to do such a thing but you imagine the dilution this would have of the concept of son, sibling or indeed father? Dromgoole uses this to hold a mirror to the nature of all kinds of relationships with just two actors, Emma Fielding and Katy Stephens, playing all of the parts. They’re both outstanding as men, women, lovers, sisters, man and wife, ventriloquist, registrar and candlestick maker (probably) and in a bewildering switch from character to character the names are illuminated on the wall behind to help us work out our Greta from our Gertie and our Sarah from our Susan. In all there are 41 parts and it’s a tribute to Emma and Katy that you begin to recognise them one by one, like streetlights, illuminating the narrative.

It’s quite a feat and whilst I’ve seen many a one person show with multiple characters, playing 18 vs 23 takes so much skill and trust; like the two mimes at the end of Antonioni’s Blow Up who play tennis; they both have to keep their eye on the ball. Gradually you become involved in the key relationships as the nature of paternity, “relationship” and being a “sib” of this “father” is uncovered.

Normal rules fall away, even our urge to follow the path of parenting is revealed as a choice when the most important thing in all of this is love; the love that never entitled the sneaky sperm donor to claim parenthood for any save his only children with Barton, Ruth and Jonathan.

It’s hard not to feel resentful about a man who placed his own genetic inheritance so highly in other’s lives and who never acted as the third party is presented himself to be. The Wiesner’s practice was based in London and from the late thirties until the sixties they provided artificial insemination services for childless couples and it was only in 2007 when DNA analysis of a sample provided by Jonathan enabled the first people to identify him as their genetic father.

This “Barton Brood” forms the basis of the play as they uncover their relationships years after the “Daddy” destroyed the evidence. Set in 2007 it has characters aged between forty and eighty, a remarkable legacy of deceived humanity gradually discovering the truth and their enduring qualities.

It starts with Kieran, adopted son of Karen who has just died of breast cancer. He now knows that his “cornerstone”, the relationship between his birth mother, Beatrice, and his father, was laid in a west London clinic and not in the bounds of normal intimacy. Beatrice’s husband, Samuel, could not bear the fact of his origins and he was abandoned and brought up by Karen; more his real parent than any of those involved in the biological process.

Then there’s Bret and Caroline whose halting intercourse is interrupted when she spots that he’s got an extra digit on his right hand… genetics? Gracie and Ethel are a more committed couple but Gracie’s search for her true parentage threatens to undermine their balance… reaching out for more family, Gracie wants considers having her own with Ethel but is she merely compensating; putting some right to her wrong and morphing her relationship into something more normative as a result?
For everyone, the discovery of their empty father unsettles and leads them on to analyse their definition of love.

Kieran meets Rota his half-sister, test-tube removed… while we discover Gracie’s backstory as her father lies seriously ill in hospital with Huntington’s were Caroline (yes, that one… the characters cross over with bewildering ease) works. There’s Bret, who thought he was the son of another one of the Barton’s circle – a surgeon – who has grown up anti-Semitic: he may good genes but that doesn’t guarantee personality and judgment. Sadly for Bret it turns out he’s actually one of Wiesner’s: a Jew.

So it goes, as Dromgoole toys with preconceptions and deftly shifts her narrative through characters without losing pace or tone. With one of life’s greatest certainties – our “Cornerstone” – in doubt we’re left to find new meanings and a new basis for love. The play doesn’t let us down and delivers the satisfying emotional crescendo we need and it’s also very funny throughout. 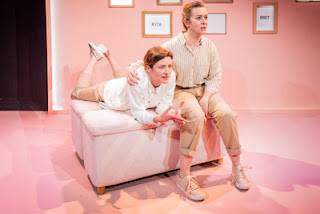 Credit to Tatty Hennesy’s direction which fully embraces the challenges of the writing, and to the energy of the two leads: they never let up and richly deserved the rapturous applause at the close.

Mary's Babies continues at the Jermyn Street Theatre until 13th April, details on their website.

Ithankyou Rating: **** This is an outstanding play that makes light work of its heart-rending subject matter, it puts so much faith in the audience and we are rewarded with love and light.