Back to the future… Henry V, The Maltings Theatre, The Roman Theatre of Verulamium 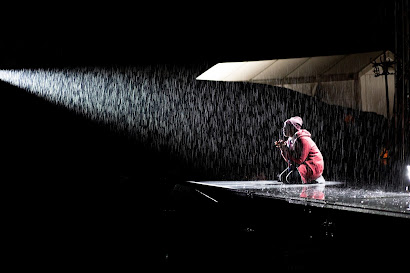 “We few. We happy few. We band of brothers…”

After the drought, an outpouring of pure theatre in the eerie surroundings of St Albans’ 1900-year-old Roman Theatre and an event that already feels like the sweetest of dreams after five months without live performance. This was socially-distanced theatre and the Romans were typically ahead of the game in constructing this open-air wonder that allowed for a safely-spaced capacity audience on three levels as well as a single file bar and the odd fly past of murmurating starlings.

Director Matthew Parker had been tasked with devising a production to meet the “new normal” and managed to weave this into his typically innovative staging by presenting Henry as a school play or rather a play within a school play with entreaties to maintain social distancing carried over from rehearsals as the teacher’s call to pupils. If this sounds over-complicated it wasn’t as Mr Parker, as so often, succeeds in making the most complex of situations flow as naturally as the ancient verse from the mouths of his performers.

Matthew was also limited to ten players and so, in addition to being school children and teachers, they also had to play more than one character often transitioning in the switch of a line with all joints invisible. Some of us may have lost some match fitness over the last five months but these guys were straight into Olympic levels of heptathlon multi-eventing and it was an absolute joy to see.

I also had unfinished business with Henry V with my mother-in-law having fainted a few years back during a performance of what is one of her favourite Shakespeare’s at The Globe… she’s seen the play dozens of times but I missed the ending and so this was my first complete run through and I was pleasantly surprised to see that the Agincourt result went the King’s way given what appeared to be overwhelming odds.

So, it was an afternoon of reconnections and the energy from the audience was palpable from the start and we were all lifted by the glorious team work on stage as Ms Nightingale (Cassandra Hodges) readied her pupils for a run through. This is a very kinetic production and the “pupils” and players were in constant motion moving forward on the stage for their lines as if limbering up for the high jump or a rap battle. None of these distracted from the play with the physical pacing designed to move the audience and the characters deeper into the drama as it unfolds.

Henry V is “meta” enough well before its time with the Chorus/Ms Nightingale explaining that there cannot be stage scenery enough to do justice to the full glory of the King’s story and our mind’s eyes duly tipped off we begin to imagine the backdrops superimposed over the Hertfordshire countryside beyond. There’s also a humour that’s little changed over the centuries with the French Dauphin (Luke Adamson) responding to Henry’s signalled intent to claim his rightful throne with the gift of tennis balls, a reference to his youthful immaturity.

But this is not the same Henry as in Shakespeare’s Henry IV plays and here, as played by Mara Allen in her first leading role – a double challenge, very well met – the young King is in full command with an emergent ability to inspire and lead.

"Now all the youth of England are on fire... They sell the pasture now to buy the horse, / Following the mirror of all Christian kings ...."

Henry survives an assassination attempt from the Earl of Cambridge (Rachel Fenwick showing her Shakespearean pedigree throughout) and sets off for France. The play, as with so many, was the playwright’s attempt to not only justify the legitimacy of the Tudor throne but also to laud the character of Queen Elizabeth’s forefather. Henry’s leadership skills are demonstrated in the first battle for the town of Harfleur as the king implores his struggling troops to return “once more unto the breach…”

By contrast, the French are painted as arrogant, although King Charles VI (Jack Reitman, Offie award-winning for The Hope’s Thrill Me – also a Parker production) is one of the few not to underestimate the invaders. I loved the richness of the minor characters such as Welsh moaner Fluellen (Mr Adamson again), the unscrupulous Bardolph (Paula Gilmour) and the energetic Bates as played by Felipe Pacheco who gave such a physically fluid performance, lots of snap in his long staff as well as kick in his heels.

The play’s a lovely mix of grand scale and common folk cameo all of which reinforces Henry’s humanity and leadership qualities. Famously, on the eve of the impossible victory at Agincourt, he walks in disguise among his soldiers to gauge their mood and give himself fuel for the fiery speech that will lead them to prevail thanks to archers and organisational inspiration. There’s death and diplomacy interlaced with humour and I loved the Franglais of Princess Katherine (Ms Fenwick again) as she struggles with English pronunciation with the aid of her maid Alice, with Paula Gilmour skilfully channelling the Essex accent of school player Josie for the word “nails”, an’ “’ands”.

All of the cast get their chance to shine with rounded multi-roles from Melissa Shirley-Rose, Edward Elgood and James Keningale, especially as the blustering Pistol! All get their chance to dance to at the rousing finish with modern beats which would have confounded the Bard.

The acid test for any Shakespearean production is being able to deal naturally with the dialogue whilst opening up the meaning to modern audiences and I have to give Mr Parker’s “class” 10/10 for that: we were entertained and enlightened and that’s something I missed the most about theatre this year.

IThankYouTheatre Rating: ***** It’s a treat to see Shakespearean sophistication at this level in Hertfordshire or, indeed, anywhere. Please support this season: theatre is back and not a moment too soon!

Henry V continues along with the rest of the Open-Air season until 31st August and tickets are available from the Maltings website.

All photographs from Laura Harling except for my day-time shot of the rain-free theatre. 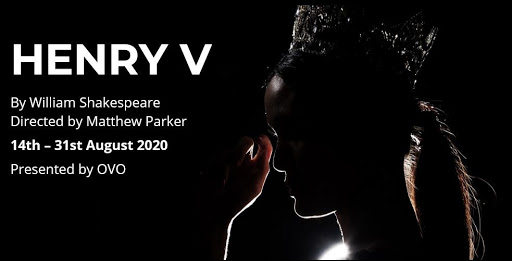