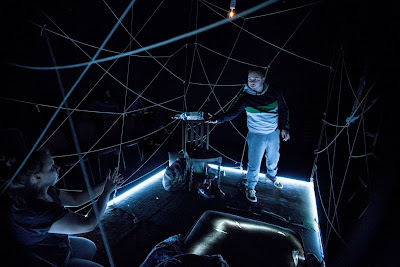 “You stop having dreams don’t you, when real life keeps on slapping you in the face, down and down…”

There’s a surreal moment near the end of this play when the lighting flicks on an off and the actors move around the central space like two people filmed in stop motion on a CCTV or, more accurately, two rats in a laboratory. The Hope’s promethean stage has a “room” delineated by string, rope and ribbons in which Michael Black (The Lad) and Alana Connaughton (The Lass) spend almost all of their time: they’re right in front of us and yet that thin barrier holds throughout their mesmeric double-header. At one point The Lass looked out of the “window” at the folk next door and I strained to see what she was seeing…

Starved tells of two youngsters on the run from a crime that only gradually becomes apparent. They’re exiled from friends and family, trying to avoid the law in a miserable bedsit on one of Hull’s most unforgiving estates – you can imagine this scenario all over the country and the human dynamics take you away from any knee-jerk political reading. Universal credit gets a mention but only in the context of just one more thing dragging people down; another slap in the face for people who can’t see straight for blinking.

All that matters is the relationship before us, the bigger picture is a luxury they simply cannot afford as they live from hand to mouth on the brink of disaster. The Lass stays in as her fella goes out scavenging bringing them back Cup-a-Soups and, if they’re lucky Rich Tea biscuits although the class divide between even these two is highlighted by her preference for Custard Creams or even Hobnobs.
She’ll get what she’s given and the two drink to excess every day in the absence of anything better to do and to deaden the ever-present fear that drives them under and further away from facing the consequences of what they have done.

The relationship is skilfully balanced with the couple sniping constantly and making up as they go, there’s affection, jealousy and there’s blame; are they getting to know each other or just doomed? It’s to Michael Black’s credit that the play leaves almost everything open: this is a cycle of dangerous possibilities and yet there’s a distant hope for the young people.

It’s in our consideration of just how the two might move on that the play is “political” as what it presents feels almost like a documentary than a drama. “Everything and everyone is pointless…” and “it’s just getting worse…” how are we to contribute to a solution?

The direction from Matt Strachan enables the two performers to unleash so much emotion within this constrained space – smaller even than usual – and both are amazing to watch, Alana crying real tears of frustration, fear and rage as the man she loves or could love, blows up in her face. Michael Black has a brooding presence and portrays a softness that gives The Lass and us hope.
There’s no doubt they are both sorry for what has happened as well as what they did and they want to change but how can they in the face of consequences which may damn them to this existence for good.

Mention should be made of Ruth Phillips’ movement direction – a lot to choreograph in that imagined room, as well as the design from Esteniah Williams, Lighting from Aiden Bromley and Sound from Nicola Chang.

Ithankyou Theatre rating: **** Another transformative experience at the Hope and a couple I will not soon forget. Their personal becomes our political in subtle and challenging ways, a smartly sculpted story.

Starved plays at the Hope until 3rd August, fortickets and details, please see their website. 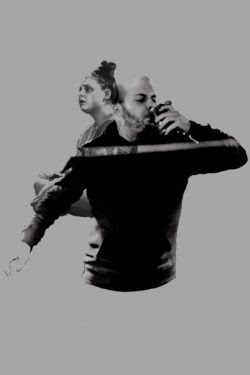 Posted by Ithankyou at 14:24 No comments: 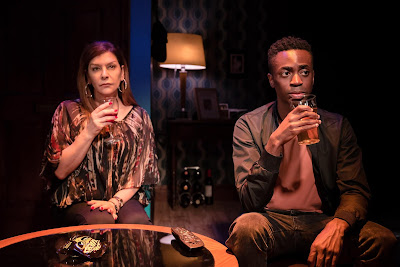 “Nowadays you’re lucky if you get a rehearsal… which is very unlike life, if you think about it, which is all fucking rehearsal and no fucking performance…”

At various points in my life I have indeed felt the pull of old “fantasy television” and ended up buying not just box sets of old TV comforts but also annuals and toys. Now these are not just for me you understand, they’re for my son who I long ago infected with Star Wars and Doctor Who… and now he too is at the age when the originals were best

Yet, far from being nostalgia pick-me-ups, the best science fiction has always presented a mirror to our current lives, highlighting the dangers, just around the corner. Thus, in watching a near future world conquered by Cybermen or Daleks we realise how much of our current moral strength (largely) prevents this happening. Science fiction and science fantasy are concerned about the future and that concern is also very much for now and not later.

But, is TV science fiction the “answer” is it a way to lead your life either as a performer or watcher? Michael Dennis’ new play examines the role of fandom in revealing and obscuring eternal truths. It’s a massive subject and even with the play’s running length not one to be exhausted in a single evening but the characters are warm and the interjections of sections from the “actual” show with Simon Thorp channelling equal parts Tom Baker and Paul Darrow as Vykar and Mark Gatiss in his (recorded) dream role as Orac’s cheekier cousin Kosley the Computer, make sure that Dark Sublime carries the atmospherics of its inspiration.
On top of this of course we have your actual sci-fi royalty in Marina Sirtis – Star Trek, The Next Generation's Deanna Troi - as Marianne and she does not disappoint especially in giving us a rounded character who is more than just the sum of her previous parts… As her character says: “It paid the mortgage – helped pay the mortgage – but it’s not the one bright book of my life! I’ve played parts over the whole of my career… Portia, Rosalind!”

Marianne is not Marina whose career was, literally (ha-ha) beyond stratospheric in the hugely successful TNG but she is very relatable as the jobbing actor who has made her career with runs in Emmerdale, supplemented by workshops. She’s a battle-hardened pro ever ready with a quip and a put down for friend and foe alike especially her best friend Kate (a radiant Jacqueline King – who has done a stint in Doctor Who herself as Donna’s Mum).

Marina gets some real zingers to deliver and doesn’t miss a beat, it’s a play that clearly resonates but whilst the situation is, we assume, a familiar one, the story digs a lot deeper into our relationships with each other and, specifically the ones we love.
Kate has a new girlfriend, Suzanne (Sophie Ward, subtle and sophisticated as you'd expect) a younger woman and one of unhindered emotional intelligence and with a forthright wisdom that seems to allude the quicksilver Marianne. The latter doesn’t approve but won’t really be specific about why; jealousy or loneliness or just everything.

Marianne breaks the golden rule and agrees to meet a young fan, Oli (excellent newcomer, Kwaku Mills, energetic and instantly likeable) a twenty one year old man who has found a great deal of solace in the show she made 35 years ago; Dark Sublime, a cross between the shows made above and so many that could have been. He sees universal themes that still resonate whilst Marianne sees only one job out of dozens.

Oli runs a website on the otherwise neglected show and persuades Marianne to attend a convention for 500 fans in Walsall… nominally in aid of cystic fibrosis but also a chance for people of lack minds to pay tribute. It provides a catalyst for a re-boot of the honesty in Kate and Marianne’s relationship as well as being a turning point for Oli, unlucky in love with his friend Theo but with the realisation that he is not alone in a World full of wonders.

The narratives of the fictional TV show and the here and now collide in a genuinely thrilling and moving closing segment: well written and heartfelt.

Andrew Keates directs this top-notch cast so well, there's a genuine warmth and team spirit that both underpins the tribute the futures past but also makes the human drama all the more convincing. As Suzanne says: “I think – love is… rare enough, that it needs… cherishing, wherever it flowers.” So, whether it be about an old TV show or old friends/new friends who love what you love, Dark Sublime is one of the most optimistic and funny plays of the year!

Tickets available from the Box Office - better be quick!

Posted by Ithankyou at 06:27 No comments: