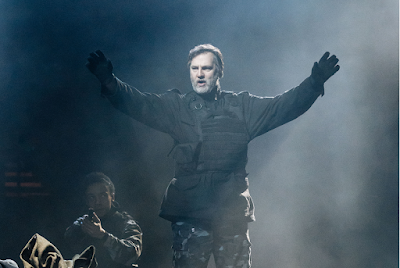 How many ages hence, shall this our lofty scene be acted over, in states unborn and accents yet unknown?

I’ve not seen Julius Caesar since the Bolton Octagon many years past. The performance area in the Bridge has eight sides but that is where any similarity ends in what is one of the most original and energetic Shakespearean productions I’ve seen. Down in the Pit, following the action in close quarters, seeing every expression every spat-out line and being herded around through assassination then civil war, this was the most physically engaging theatre.

We arrived to find David Morrisey belting out Eye of the Tiger (or perhaps Tiber?) with the house band/actors, who then kicked into Seven Nation Army before a punk thrash song of political defiance.

Off to a flyer – is this a gig or a Shakespeare and are we an audience or performers? Any disorientation was short-lived as Lady Stark and Paddington Bear began plotting impressively. Michelle Fairley (as Caius Cassius) and Ben Wishaw (Marcus Brutus) are far more than those famous roles and both have the beautiful knack of being able to wrap sixteenth century lines in twenty first century meaning: you hang on every word as they both make the task of translating the iambic complexities look effortless.

But they are not alone in a world-class cast that combines youth and experience in exhilarating fashion. Nicholas Hytner, the Bridge’s co-founder after 12 years at the National directs with audacity aided by the best sound, lighting and stage designers in Bermondsey and beyond to create a riotous show that takes its subject matter in its stride. The pitch is just right and there is wit enough to overcome any vestige of concern at pop-art Bard… they mean it man and there’s genuine anarchy in the SPQR.

David Morrisey is the scousest Mark Antony in stage history, possibly channelling Pete Wylie in this story of the blues (and reds). The keynote speech at Caesar’s funeral is quite brilliantly wrought as Morrisey takes the opening lines almost as an apology, smuggling the full force of the message in as he repeats that “Brutus is an honourable man…” It’s one of the great political set pieces in the canon and he makes it sound freshly considered, as he lays his heart open to his fellow citizens before playing from the strength he knows he has: Caesar’s crowd-pleading will.

Even in death, Caesar returns to haunt the conspirators and in Brutus’s case, quite literally as the consequences of the assassination throw an out-of-kilter republic into the arms of another Caesar, Octavius (Kit Young) and the very authoritarian rule by a single individual they were trying to avoid: Octavius, later Augustus, was to rule for 40 years, the longest-reigning emperor.

Shakespeare seems fully aware of this and as Peter Holland points out in his programme essay, hardly makes a convincing case that assassination works although the staging of the play in New York shortly after President Trump’s inauguration was controversial enough… oh my, so literal these alt fact people…

As a play about democracy it is still undeniably rich in meaning and this is reinforced as we the people formed our opinions in close proximity to the performers. In the aptly-named Pit, the Bridge’s actors can see the whites of their audiences’ eyes and it must be a visceral challenge unlike almost any other theatre this side of the Globe or intimate venues outside of the reliably constructed fourth walls of the West End.

The act of watching and being watched impacts on our role as an audience too and we’re engaged out of politeness and fascination – a very human response to the performers in close proximity as well as a reaction to the force of their story-telling.

David Calder’s deep tones were perfect for Caesar and they reminded me of the rich textures of Paul Schofield’s delivery. Michel Fairley was the perfect female Cassius, earnest and sincere in her aims whilst risking all to save the Rome she loves. Brutus is the man she needs to convince and even though she uses fake messaging – letters purporting to be from sympathetic citizens, think Cambridge Analytica in Latin and on parchment – in this reading her aims are well intentioned… Brutus is sympathetic, a man of conscience with honour; the noblest Roman of all in Marc Anthony’s final summation. 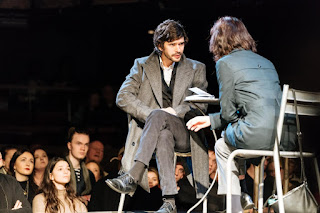 Also worthy of note is the sublime Adjoa Andoh as Casca and Hannah Stokely whose Metellus had to misfortune to die right in front of me. Abraham Popoola also cuts an impressive figure as Trebonius and also as the house band’s lead singer. In truth the large cast are all superb and I do them a disservice by not mentioning them by name.

This Julius Caesar is a thrilling and thought-provoking ride that will stay with you for days. I would urge you to go and see it and to watch it form the Pit; the Bridge is a well-structured and intimate venue even from the seats but eyeball-to-eyeball, in the midst of the action you will really feel this play more than any other in London!

And, you will ask yourself: how should we be ruled?

Julius Caesar plays at the Bridge until 15th April so you haven't much time: so do it now!

Thou nature art my goddess… Foul Pages, The Hope Theatre 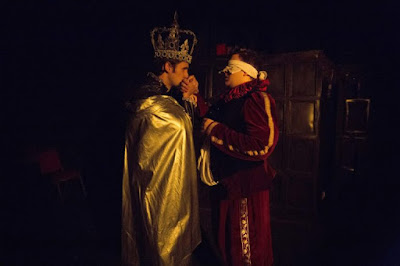 It’s Oscars week and Call Me by Your Name was deservedly nominated among the best pictures and best performances. It’s a film about falling in love and it just so happens that it’s men doing the falling without much fuss or flim-flam, certainly in the eyes of the father of one of the young men, who gives his son the best kind of support when his heart is broken. Love normalised.

I was reminded of the simple honestly of this film watching Foul Pages, a very personal play from Robin Hooper, spurred on by memories of school plays, crushes and the truths he could only speak when dressed as a “girl” in a Shakespeare play. As a schoolboy actor he said he never tried to hide what he was or could be… on stage he was liberated.

Foul pages are written in our lives as scripts for dishonesty and expedience. Just as William Shakespeare is made to re-write certain passages by his sponsor the Countess of Pemroke and forced into casting the King’s favourite as Rosalind and not the better actor he wrote the part for, so too do we all compromise parts of our integrity away and on a regular basis. To fit in at work or with social groups we modify our behaviour but when this extends to the vast area of our self, devoted to sexuality and love then it is sad and monstrous.

Even in Shakespeare’s happy-go-lucky band of travelling players the men joke about same-sex liaisons as being like in the navy – needs must - whilst others do what they do for favour and patronage. But in the midst of this play acting there is genuine affection and for one couple, a tragedy waiting to happen.

But, before all that, there’s a talking dog called Chop and he is the very best talking dog I have ever seen on stage. Played by James King with best-of-reed swagger and a ruff-ruff! round his neck, Chop is our Greek chorus and one of the most sympathetic characters, commenting straight to audience on the human doings and eventually proving to be a hero. Man’s best friend. As with Lear’s fool, Chop keeps on telling us truths; his’ master’s voice.

Nominally the story is about Mary, Countess of Pembroke (Clare Boomer) and her attempts to stage a play to appeal to King James’ better conscience so that he will free Sir Walter Raleigh. Mary’s married but Raleigh’s her man even before her husband passed on. She will do anything for him and who can blame her when even the King’s bodyguard, Mears (Jack Harding) has taken a bite out of the man who bought us tobacco and potatoes.

Mary’s maid, Peg (Olivia Onyehara) is steadfastly in the midst of this intrigue and carries on her work even as the players strut and the mistress plots. She is to be disappointed in her approach to the playwright’s brother Ed (Greg Baxter) who it seems has his heart set on another… Will himself (Ian Hallard) tries hard to protect the chastity of his work but there’s so many wanting to screw it up for the sake of politics, themselves and other issues.

His poetry is also a catalyst for human response and not just as a potion aimed at encouraging the King’s good will. For the talented Alex (Lewis Chandler) Rosalind is the role he was born to play and for Rob (Thomas Bird) it’s the thing with which he’ll catch the eye of the king as he dreams of land in Lincolnshire and the comfortable life of a consort.

King James (Tom Vanson) proves both generous and considerate but the presence of all-powerful royalty does tend to bring out the anxieties in his subjects and jealousy inspires violence as our players become increasingly desperate in their attempts to follow their hearts’ desire.

Foul Pages is another intensely theatrical triumph for the Hope and as you would expect, Matthew Parker directs his crowded stage with panache and pace. The energy is high and maintained by snatches of thumping electronica (Chop-House Music?) the action never lets up as the characters move across and around each other from start to finish.

It’s bitter sweet but a glorious plea for honesty and for your truth. It finished with a pumped-up players’ dance that, for a second, I thought we should all join in.

Foul Pages runs until 17th March and tickets are availablefrom their box office and online. 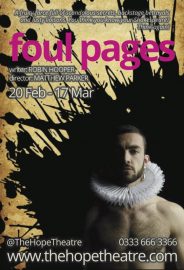 Posted by Ithankyou at 01:13 No comments: