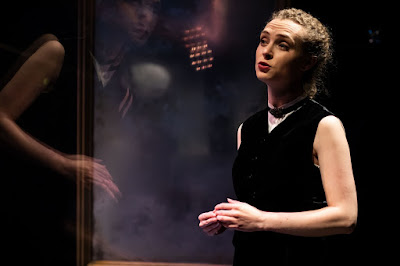 I once faked the results of a supposedly un-fakeable psychometric test which frustrated my good friend the HR Director as the facilitator of our workshop suggested that I’d either worked it all out (unlikely) or that I was so deeply subsumed in my work persona I was masking my actual personality. Clearly, it’s not just actors who use the method at work but what if we all hide too much; what becomes of those feelings – our instinctive and moral response to events - if we were able to separate action and emotional response would that take away responsibility as well?

This is just one of the lines pursued in Lucy Shaw’s sparkling adaptation of Oscar Wilde’s only novel, which is given a further twist by Director, Tom Littler having the four cast members rotate their roles.

Shaw has pulled very modern resonance from the story and created a meditation on the poet’s view of art, love and spirit. I read the book a long time ago and my impression remains of a richly worded gothic morality tale in which Gray’s need for sheer experience leaves him exhausted whereas my partner just thought it too arrogant: author failing in one of his chief instructions there: 'To reveal art and conceal the artist is art's aim.”

In this play, Dorian succeeds in concealing him/herself so much that he loses touch with responsibility for his actions; the picture takes the hit, measuring the impact of his actions on his soul even though it is hidden away from view. This is spookily done with the players in perpetual motion calling out Wildean motifs as they circle the immediate action – not so much a Greek (Street) Chorus as a Piccadilly one.

Tonight, Helen Reuben was Dorian Gray and she positively glowed with the thrill of a person having set a course for nothing but their own gratification. At first Dorian is happy enough to fall in love with Sybil Vane (Augustina Seymour), a young actress in a tavern theatre who has imagination enough to play all the Shakespearean emotions without having felt them. She and Dorian share a symbiosis and once she becomes aware of her “Prince Charming’s” affection she cannot act anymore as she’s realised how powerful true emotion is.

She’s the inverse of Gray who, once she has revealed this, becomes instantly bored with her: he preferred the fake to reality. Sybil takes her own life in misery at the rejection – imagine how deep that love and that pain? – but Gray quickly dismisses it even as he notes the impact it has made on his soul painting. He’s in it now and the only way forward is obsession and experimentation.

Gray has two great friends, Basil Hallward (Stanton Wright), the earnest artist who paints his incredible picture and the rather louche Henry Wootton (Richard Keightley) who gets most of the best Oscar lines. Henry wants to lead his pal astray whereas Basil is so in love he wants to capture his essence. He is so successful in this, of course, that Gray’s takes the fatal step of declaring he’d give his soul to be able to look as he does in the picture for ever.

The play works on so many levels but is far more mystical than the book, with Augustina Seymour, floating elegantly in a satin evening dress like a spirit on her way to a supernatural cocktail party, catching Gray’s promise in her hand. Littler and Shaw have restored the poetry to Wilde’s prose and made the play broader than the book with less specific meaning. This is where the rotation of genders and actors will make for a fascinating change of emphasis on different viewings – I really must see another combination and watch these superb players change persona again.

Pictures of Dorian Gray plays at Jermyn Street until 6th July - details on their site plus spooky trailer!

Ithankyou Rating: **** It’s a Wilde ride that sparks so many hot takes as you work out new connections between Wilde’s words and his meanings – I used to think Dorian was him but now I’m not so sure; he’s more a part of all of us.

Posted by Ithankyou at 00:55 No comments:

A matter of life and death… Handel’s Messiah, The Little Orchestra, Porchester Hall 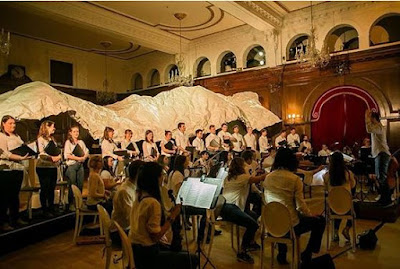 The Little Orchestra promised a different take on Handel’s masterpiece and they didn’t disappoint, with conductor/compere Nicholas Little not only deconstructing the many working parts of this mighty, mystical engine but also explaining the story behind the piece itself.

The Messiah has a special significance as it was one of my mother’s favourites and she’d watch it every year played by her brother’s old band, the Royal Liverpool Philharmonic. Needless to say I didn’t make it past the second bar of the overture without welling up – this is powerful, resonant music with huge dynamics and emotional intelligence: almost unimaginable creative time travel from a composer way ahead of his century.

For all of Charles Jennens’ words, it’s the music that really moves you and Handel is so fluent in expressing the emotional narrative with a directness that belies the uncanny craft he deploys. It’s music that is positively cinematic, conjuring a response through power and subtlety.

Mr Little’s orchestra is far from small, there were 17 singers, two actors for the spoken parts and two dozen players all bringing the noise to this 200-year old epic. The Porchester Hall had been decked out with a twisting cloud-like installation that divided the room between the performance area and a cocktail bar. The mixologist who served us had over 500 cocktails in his head whilst opera singers kept the music flowing after the main event had finished; this was a well thought out and richly rewarding cultural experience.

The LO had previously played part one at the Hall last Christmas and so it was the power of the choir that did for me as they sang Behold the Lamb of God at the beginning of part two. The choir was arranged chromatically from sopranos to bass, almost like a human pianoforte and with four excellent soloists performing the composers’ mix of leading line and chorus to perfection.

In between each segment of “songs” Nicholas would explain the background to the meaning and how contemporary audiences would have responded. He also gave context to the work, explaining that it was basically propaganda for English Protestantism with Jennens quoting liberally from the King James bible at a time when Catholicism had been firmly dislodged among the ruling elites. Not unlike our current debate on Europe, the split in Christianity had preoccupied the  country for a long time and now the battle had been won, it needed to establish its own legend. 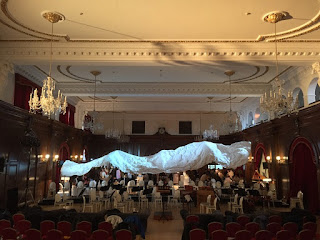 This was also the time of The Grand Tour when noblemen would travel Europe in their early years to experience the culture and gain enlightenment – imagine that! Whilst many spent far too much time behaving badly, enough found their way to Italy to be impressed with the emerging forms of opera. The German-born Handel had travelled extensively himself and knew how to compose in this style, he also developed “English oratorio…” a form all of his own making involving a mix of spoken word, grandiose orchestrations and thematic collections of “songs”.

Jennens’s libretto may have been influenced by the suicide of his brother who lost his faith studying at Oxford and took his own life. As with many in a time of fragile mortality, the writer looked to the life beyond for comfort.

His script for Messiah therefore focused on the divine resurrection and the ultimate defeat of death… precisely what people wanted to hear, not just from a human point of view but also from the perspective of their religion; Protestants were the new “chosen people” and the English were on the right side of immortality as well as history.

Ithankyou Rating: ***** An evening rich in discovery and emotion, Little managing skilfully to inform and explain without deadening the impact of the music.

Catch The Little Orchestra if you can – details are on their website.

Posted by Ithankyou at 06:22 No comments: