Who do you think you are? Insignificance, Arcola Theatre 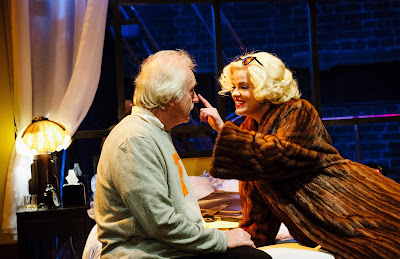 “That’s the trouble, a sex symbol becomes a thing… I just hate being a thing…”   Marilyn Monroe or Norma Jeane Mortenson

People should be queuing around the block to see Marilyn Monroe explaining her take on the theory of relativity to Albert Einstein… it’s to do with a green train, a red train, two flashlights owned by Mickey and by Donald…

It has been over 20 years since Terry Johnson’s play Insignificance was last performed in London and now, when our faith in expertise is being questioned, the possibility of the glamorous even attempting to digest theoretical physics is challenging. We don’t know if Miss Monroe dabbled in physics but we do know that she was a lot more intelligent than her carefully-crafted persona allowed her to let on.

She was not the first to dumb down for her audience but she carried it off in style enjoying Groucho Marx’s description of her persona as a combination of Theda Bara (a knowing soul herself), Mae West and Little Bo-Peep.

She was famously married to baseball legend Joe DiMaggio, a man who here confesses to enjoying being “stupid” and deliberately choosing not to engage but it’s not clear whether she met Senator Joe McCarthy, here portrayed as a solipsist who believes that he is the only one who exists and that everyone else is a figment of his imagination – that would explain a lot Joe.

The three converge on a mid-town hotel in the play as Marilyn knocks on Albert’s door in the middle of the night, looking for an intelligent conversation and perhaps more… Albert is lost in the music of mathematics as he weighs up whether or not to testify in front of McCarthy’s House Committee on Un-American Activities. He’s a man of honour as Joe D will later suggest but he too is hiding himself, away from his two broken marriages, his estranged daughter, institutionalised son and the dread of what his theories have unleashed on the World.

Johnson’s daughter Alice Bailey Johnson makes for a marvellous Monroe from the moment she spills into Albert’s room clutching a brown-paper bag full of items to demonstrate relativity to the professor. She’s got the dress but you have to be brave to exude “Monroe” and Alice delivers in some style!  It’s the night when the skirt-blowing scene for The Seven Year Itch was filmed and following announcements in the newspapers, the late night shoot has been witnessed by thousands each projecting their own desires onto the actress. But Einstein doesn’t know who she is… to her delight: at last, someone she can be herself with!

Simon Rouse takes on another tough task… it’s not easy being Albert either and he carries it with the easy-charm you’d expect of such a cerebral man. Famously the scientist only focused on the thoughts that were useful and tried to forget the “excess” – he’s not absent-minded, just focused and, with Marilyn, he finds someone he can open up to. The more you watch the play, the more these two appear meant for each other… Johnson’s writing is so strong on character and consistency of sentiment.

The two Joes are well-played by Oliver Hembrough, whose chewing-gum popping DiMageo barely understands his wife other than as a physical experience, and Tom Mannion playing McCarthy as an ego-maniac for whom cruelty was an extension of his self-definition. They are both distractions who fail to acknowledge what’s actually playing out in front of them.

But it’s those who have the most to hide who express themselves the clearest and we would do well in this era of the fake and the phony to recognise their truth.

Insignificance plays at the Arcola Theatre until Saturday 18th November – tickets and more details are available on their website. It's an excellent venue all round and one of E8's finest gems!

Posted by Ithankyou at 12:16 No comments:

Off the rails… All the Little Lights, Arcola Theatre 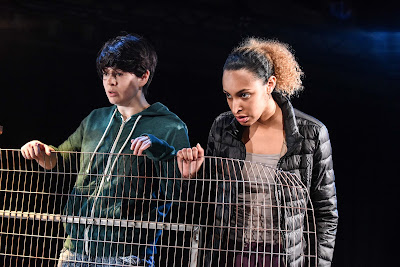 “Look dead cosy, don’t they? All the little lights. S’a trick though. Same shit in every one…”

Three girls camp out on a hill by a train track, looking out at the houses in the dark, imagining a better life… It may already be too late for them and even though they are clearly still children, there’s an unspoken darkness that taints their fantasies. All the Little Lights is about the fragility of innocence and the life-changing oppression of male desire.

Somewhere, tonight, these scenes or something similar are being played out… and that realisation hangs over you as you walk out of the Arcola into the Dalston air. Jane Upton’s story is so well constructed that even when you know what’s coming, the revelations are quite simply devastating: it’s one of those plays that makes you feel you’ve intruded on private grief so well do the three leads perform and so true are Upton’s sentiments.

This is no middle-class guilt trip as we’ve all been far closer to this than we’d admit. This is not about class or politics but about human decency and the will to protect the most vulnerable in society and, now as at every point in our history, we haven’t been doing that. As the idea of might being right gains renewed traction in the wake of our collective refusal to engage with actual detail, we need to pull ourselves up and accept responsibility. Or we can just shout our problems down on social media…

This is a potent reminder of the power of theatre and the three actors are simply electric. Tessie Orange-Turner’s Joanne is lightning quick, full of anger and desire, a survivor who’s seen too much but still hopes for escape to Skegness. Her best mate, once but not now, is Lisa (Sarah Hoare) who is stuck between wanting to rekindle their friendship and the fear of what Joanne can do to her and her foster carer, Pam. Then there’s 12-year old Amy (Esther-Grace Button) who provides some of the biggest laughs and yet who is very much a “before” picture of what the elder girls have become.

Lisa has just turned 16 and Joanne, a little older, has invited her for a belated birthday party by threatening to throw acid in Pam’s face. No wonder Lisa is wary but there’s more to Joanne’s bullying than meets the eye. She is desperate to win her friend back after an un-specified moment that hangs over their discourse until well into the play.

The three play out a scene from ET with childlike glee, Amy on her knees as the alien poking a stick in the face of Joanne’s Elliott as she/it expresses the desire to go home… no wonder it’s their favourite film. Frozen is also important to them; they’re kids. 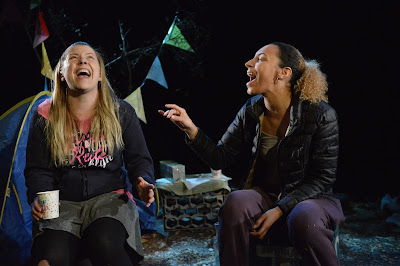 They are haunted by their recent past and when the chance comes to play chicken on the rails as a train approaches, you see them come alive, the thrill of the near miss liberating them from their failing lives…

“Feels like you’re on fire! Every bit of you’s electric!” shouts Lisa, for once forgetting herself… this is how they should be, exhilarated and living in the moment not cowed by guilt and physical horrors we can barely comprehend.

When the reason for their estrangement becomes clear, it’s horrific, magnified by our extinctive connection to the characters, as their carefully-crafted childhood disintegration is laid bare. The closing segment picks up a visceral momentum that contributed to cheering applause at the end: the three actors gave their all and we were grateful and not a little overwhelmed.

Esther-Grace Button is thoroughly convincing in the "Mary Pickford" role of young Amy (acting half your age takes skill!); she has great comic timing and brings what little light relief there is. Sarah Hoare carries Lisa's shame with impressive physicality, her load is only lifted when standing close to oblivion on the rail tracks when she is "electrified".  Tessie Orange-Turner is power-packed as the conlficted Joanne, playing tough with quicksilver moods when what she really wants is her friend back and an escape to the old certainties of a life with a future... 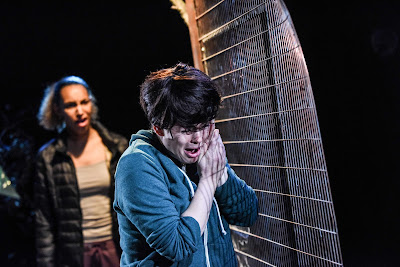 I know you want what everyone else wants. A family. A home. But you’ll never have it. Cos of what’s inside you.

The play is a Fifth Word and Nottingham Playhouse co-production. It was joint winner of the 2016 George Devine Award for Most Promising Playwright and was nominated for Best New Play at the Writers' Guild Awards 2017.  It was developed with support from child sexual exploitation awareness charity Safe and Sound and it carries the ring of truth with Upton taking the greatest of care to get her situation and characters as accurate as possible.

Laura Ford directs with clarity and focus on her actors who express Upton’s words with an almost unconscious naturalism. The three look out fearlessly at the audience watching us as they gaze at the stars and the houselights… are we really looking back? 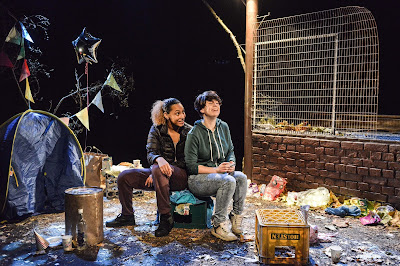 All the Little Lights is more than thought-provoking, it is transformative as well as entertaining and I would very much urge you to see it.

It runs until Saturday 4th November 2017 and I would expect tickets to be hard to come by – so book now at the Arcola website!

All photographs by Robert Day
Posted by Ithankyou at 11:49 No comments: