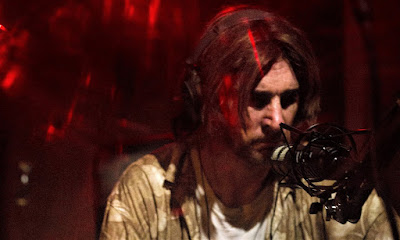 In a world in which contradiction and aggressive inconsistency appears to be all you need to be a success, Eric Bogosian’s 1980s play gets its UK premier to help explain how this came to be.

In a recent interview, the writer and performer nailed the trick in one line: “…people get confused about what’s real and what isn’t when you have this pundit who’s pushing all kinds of opinions and jerking us around.” But… and it is indeed a huge "but", we get the thought-leaders we deserve or, more accurately the thought reflectors. When given the chance to speak our minds and to use “marvellous technology” to freely express in a constructive way, we waste it; pre-occupied with our fears and actively seeking negative reinforcement and comfort-hate.

In the eighties, it was talk radio and now, our thoughts magnified a thousand times by social media, we fall into the same trap of allowing those we gift into positions of power, the liberty of telling us what we think. As it is with President Donald Trump so it was with Barry Champlain, the shock-jock at the centre of the play and Oliver Stone’s dark-edged film version. But Barry is smarter and more self-aware than Trump, he knows his limitations and, in the final analysis, he also has an honesty unavoidably lurking behind his quick wit… but has he the moral courage to take responsibility for the impact he’s having?

Director Sean Turner promised that “…the production will be anarchic and raucous – once we put our foot on the pedal it will not stop…” and it doesn’t from the first rapier thrust of Matthew Jure’s Barry to the last, there’s no let-up.

Sean and designer Max Dorey have made the most of the Old Red Lion’s space and the audience are placed in the heart of a radio station set that has Barry behind Perspex glass with his assistants and station manager outside. It reinforces Barry’s isolation as well as his connection with the twilight world of callers through his show Night Talk. Barry’s long-standing producer Stu (George Turvey) and his long-suffering love interest Linda (Molly Myfanwy McNerney) filter his calls and feed him through a variety of callers from twee cat-lovers to crypto-fascists, harmless cranks to sinister ill-wishers.

To them all Barry issues the same challenge: what is it exactly you want to say? How are you going to use the time to make a genuine point?

Barry is rude, confrontational and short-tempered. His local show is a success and station boss Dan (Andy Secombe) has grabbed him the opportunity of nationwide exposure… the big stations are listening in and tonight’s show must go well. Yet Barry isn’t happy with this… he’s not been consulted and what’s more, whatever is troubling him about the direction of his show is about to be magnified on across every state.

Barry is conflicted and very uncomfortable with the role he has created for himself. During one of the monologues from his colleagues direct to the audience, Dan reveals that Barry’s background as a Vietnam vet with hippy credentials and a Chicago University PhD is a fabrication and we’re surprised he allowed this especially given Stu’s recollections of his uncompromising pranks at their first radio station: locking themselves in playing Let it Bleed 23 times over for effect (at least it wasn’t Goats Head Soup…).

Linda’s is the most revelatory though as she talks about her difficulty in breaking through Barry’s exo-skeleton of hard talk… even when asleep he is troubled: he may not have been in ‘Nam but he’s living in difficulty.
The callers are relentless and Barry knows them all too well, dismissing quickly those who are just going to say the same old thing. One caller gives him pause, a young man called Kent (Ceallach Spellman) who sounds stoned and distressed as he talks about his girlfriend being unconscious: has she OD’d? The Police call in concerned and Dan makes him hear Kent out even though Barry is convinced he’s a fraud.

There’s also another caller far more menacing in tone who challenges Barry more directly… he even sends him a parcel claiming it contains a bomb. But Barry knows his callers, he knows they’re sadder than him, even this one?

As the Jack Daniels bottle gets drained and Barry cuts a line, he gets more strung out rejecting both Linda and Stu’s help. His night is reaching crisis point when he invites Kent into his recording booth and you wonder how much longer he can deal with his own self-deceptions in the face of an audience “mesmerised” by their own fear: they can’t move on, they can only call in and they just want to him to confirm its alright to go down without a fight.

There are no easy answers and no clear conclusion as in the film...

Matthew Jure gives a performance that leaves everything out on the track, with Barry’s confliction given exhausted, physical expression over the course of the two-hour running time. He is almost constantly talking, baiting his audience and himself as they fail to meet expectations he clearly can’t reach himself… Perhaps we all need to move on together?

Compelling, challenging and highly entertaining, Talk Radio is very “hot” media indeed and I guarantee you will “lean forward” as we media types always say. If you’re not affected by this play, you’ve not really been paying attention and, with Matthew’s Barry in the room, that’s just not going to happen.

Talk Radio plays at the Old Red Lion Theatre, 418 St John Street, London until Saturday 23rd August and if you want to understand the enduring truths about misdirection, ego and corrupting power *and* be entertained, you shouldn't miss it!

All photographs courtesy of Cameron Harle. 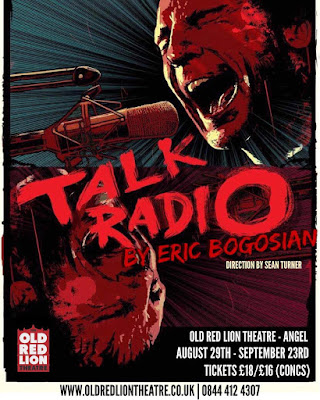 Posted by Ithankyou at 13:46 No comments:

If fusion be the food of love, play on… ISHQ, Sadler’s Wells 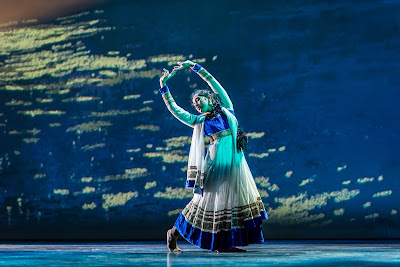 Not every musical play leaves you with the theme song stuck in your head and the urge to dance all the way home and if I was just a tad less self-conscious that would have been me.

ISHQ is London’s first ever Anglo Punjabi Sufi musical and in the 70th anniversary of independence, celebrates the enduring qualities of the Sufi religion: compassion, harmony and peaceful coexistence. It’s an irresistible cocktail of classical and modern dance with a blend of poetry and fusion music that works on both heart and head.

The story of Heer Ranjha was written in 1766 by Sufi saint and poet Waris Shah and possibly based on actual characters from the Lodi dynasty in the Fifteeth Century. Shah’s poem works on a number of levels: love story as well as spiritual journey… enforced separation and reunion. Ishq is the greatest of all passionate loves and is the love of the Creator, absolute and pure. 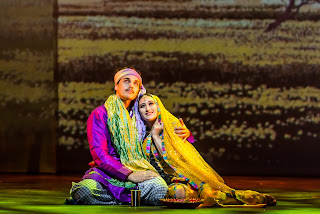 Producer Huna Beg and director, Dr Farooq Beg, were also drawn to the story’s lessons about gender and free speech: choices enshrined in Sharia as rights according to women. It might surprise some that this eighteenth century text places such importance on the heroine’s consent in marriage but you shouldn’t always read a book by the Daily Mail cover…

As Heer says: “… let me stand on my own and I will no longer be a burden… but men like you will never do that… you fear that you will lose the power to manipulate, to control… to blame.” Even allowing for the modern translation, that’s one independent, intelligent woman.

Sadler’s Wells was packed to the rafters for the opening show in this short run and hopefully there will be more to come. There’s a dazzling mix of dance, singing and music to accompany the dance with my favourite being the two-ended drummer who had the audience trying to keep up clapping: it’s a very stirring sound. 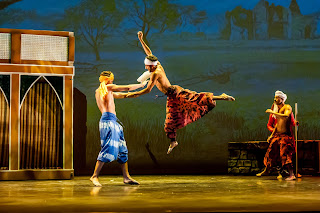 But you can’t fail to be moved by such a joyous celebration of a culture that has contributed so much to this country as well as beyond. For many in the audience the story may have been familiar and there was a ripple when certain set-pieces unfolded but the narrative was well-presented and the script from Mushfiq Murshed made light work of the heritage.

I must also mention the set design from Declan Randall which cleverly projected different backgrounds onto a variable array of net curtains. This enabled quick changes of “scene” and looked quite stunning.

In truth, the list of contributors is too long to name check but I must also commend music advisor and flautist, Kansia Pritchard, who’s plaintive lines were so important in conveying the soulful emotional heart of Heer’s lover Ranjha.

As the play opens, we find Ranjha (Ahsan Khan) in pieces, mourning lost love and about to be thrown out of a mosque by three short-tempered and faint-hearted worshipers. A white-bearded Sufi (Irfan Damani) stops them and begins to explain why Ranjha is the way he is.
We quickly learn that Ranjha was once the shining light of his family, popular with almost everyone except his jealous brothers. In fairness the flute-playing dandy may well have brought this on himself but he is disturbing the peace and gets exiled for his unrelenting insistence that the flute is the key to cattle herding.

Ranjha meets his match when he encounters the lovely Heer (Rasheda Ali); after she lets him use her boat to cross a river, he’ll toot his flute for no one else but there’ s problem of Montague and Capulet proportions… he’s not worthy and her family force her into marrying at the right station but this is one occasion when “yes” doesn’t even come into it.

“Marriage is just a contract…” says one character and the love between Heer and Ranjha can not be overruled by legalities but torments follow as both have to learn to follow their hearts no matter what the cost.

The leads were both superb with a special mention for Rasheda Ali’s stage-strong singing. There’s also a grand turn from Adnan Jaffar as her villainous uncle Kaido who clearly relishes being the bad guy but who still manages to convey something close to likeability.

That’s key to the whole enterprise which is as good-humoured as any tragedy has the right to be.
It is a production of one of Pakistan’s leading theatre companies, Serendip, who have built a reputation as innovators through their choice of plays covering diverse modern subjects from sexual politics to drug abuse and HIV. 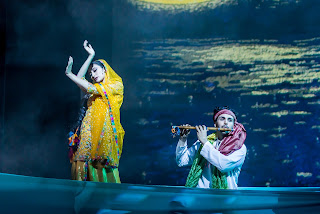 ISHQ’s women are independently minded and its world turns on understanding and the willingness to learn lessons. A musical for our times.

Further details of the play can be found on the ISHQ and Serendipwebsite, wouldn’t it be great to see this in the West End?

All photographs courtesy of Lidia Crisafulli
Posted by Ithankyou at 11:52 No comments: