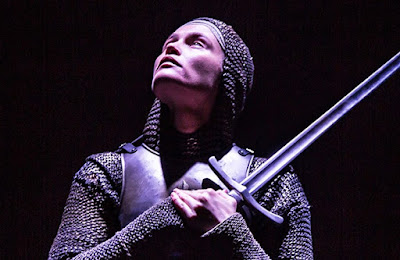 Joan of Arc was found guilty in 1431, pardoned 25 years later and canonised in 1920 – the only saint killed by the Catholic Church – prompting George Bernard Shaw to finally write a play he’d been toying with since before the war.

I only know Joan through Carl Dreyer’s silent masterpiece, The Passion of Joan of Arc (1928), which draws extensively on the remarkable primary source of the verbatim text of her trial although I have been to both Orleans – seen of her triumph - and Rouen where she was executed. They struck her down but she became more powerful than they could ever imagine (to coin a phrase).

Renée Jeanne Falconetti gave her all in the silent version, a theatre actor making her only film and here we have an actress known mainly for film but now maturing as a stage performer of tremendous power and sophistication. I’d previously seen Gemma Arteton in The Master Builder (Almeida) and The Duchess of Malfi (Sam Wannamaker, Globe) but here she gave a performance surpassing even the latter (reviewed on Catherine Joyce's A Play What I Watched blog) and one to savour from the close quarters of the stalls’ second row. 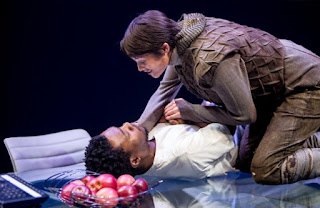 Her Joan is full of teenage passion – Joan was only 18 when executed – and native wit working through her inspirational “voices” to establish her own cause and conscience: very much a creature of post-suffragette Britain and a transgressive vision of a woman freed of the need to dress and behave as a woman.

In the epilogue this new woman wonders if her time has finally come: “…shall I rise from the dead, and come back to you a living woman? …What! Must I burn again? Are none of you ready to receive me?”
This confrontational element is underlined by Director Josie Rourke setting events in a modern world of perpetual motion governing stocks, shares and news. GBS would have been disappointed to see capitalism still reigning supreme but hey, George, have patience a change is going to come…

It would undoubtedly come that much sooner if we had more like Joan who sits through cabinet meetings and court arguments with the same simple agenda – a popularism based on the call of God and Nature to stride forwards through the constraints of self-interest to a firmer future based on belief and not convenience.

She strides through a team of men who can respect but not truly understand her and if she was a sexual anomaly in 1431 and 1923 she remains one now blasting through ceilings of stone, concrete and now glass to present a visionary leader society has to restrain through the combined complexities of religious procedure and political expedience. 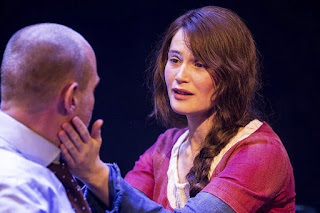 The men are like a malevolent Greek chorus mixed with a Pall Mall club who throughout underestimate this young woman, from their first encounter when she tells the French she must lead to fight to recapture Orleans and then crown the fey Dauphin (a marvellous turn from Fisayo Akinade), to her plan to re-take Paris. The new King decides he can’t finance her, the Archbishop (Niall Buggy) cannot support her theological drive and even her ally, Dunois (Hadley Fraser) cannot see how the expedition can work… she will be captured and he will not be in a position to use his forces to save her…

So, betrayed by such frail male hearts, Joan heads to her final battle in court… What is so impressive about Arteton’s performance is the way she paces her expression and the second half of this play is a masterclass in controlled explosions as Joan is swept up by hope and dashed by circumstance. 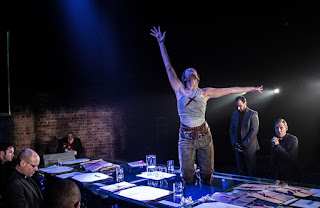 We believe in Joan’s rapture and her free-flowing tears and we share her impotent recognition as the fatal pieces fall into place: Arteton has emotional intelligence to burn and in the Donmar’s intimacy the sense of an audience holding their breath is palpable.

Some reviews have noted a drop in intensity when Gemma/Joan is not on stage and whilst some moments attempting to fit the text into modern corporate scenarios –  back-projected financial TV reporting on egg production and the battle-winning wind for Orleans – don’t entirely work, overall I really enjoyed the boys in support.

And, as Ms Rourke has realised, GBS’ Joan is still very much a story for all times: we must learn to differentiate those who act selflessly and not look visionary gift horses in the mouth. Now more than last January we face the task of democratically sorting the wheat from the chancers. 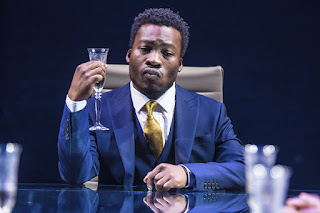 There is excellent support from Matt Bardock as in the dual roles of a cockney-spiv Baudricourt and northern hang-wringer D’Estivet, Richard Cant as the narrow-minded Poulengey and finally enlightened De Stogumber and Jo Stone-Fewings as the unacceptable face of proto-English colonialism, Warwick.

A tip of the many hats also to Hadley Fraser, Simon Holland Roberts, Arthur Hughes, Rory Keenan, Syrus Lowe and Guy Rhys. Elliot Levey is also good as the conflicted Cauchon who is ultimately devastated by the religious processes he hopes can bring salvation.

Joan runs until 18th February and – if you can find any tickets – beg, steal or borrow to see this!