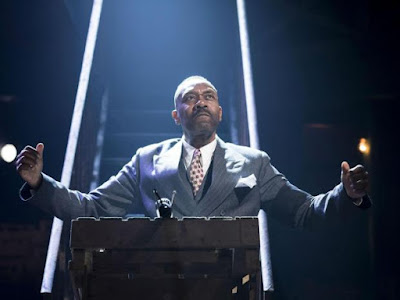 It’s not often you get greeted by one of the cast when you reach the theatre, rarer still when they’re in character and warn you to take care inside – dangerous times are afoot. At least the cauliflowers adorning the Donmar’s foyer weren’t armed, or at least when I asked Dock Doris (Lucy Eaton, whose patience with daft questions was more than matched by her talent), she didn’t think they were going to go off soon…

Once inside the performance space we had to walk on stage to buy programmes and drinks, mingling with the other actors in a theatre re-cast as a Chicago dance hall, Mack the Knife played in the background as the Threepenny Opera mixed with The Cotton Club and the audience, seated all around the stage were given instructions by the players. I won’t give anything away but this was the first play I’ve watched were members of the audience were put on trial, forced to give support to a criminal political class and – those who didn’t… well…

Whatever comes around… but there’s no inevitability about demagogues and dictators and yet, given their continued rule in parts of the world and the recent successes of a man seemingly intent on working substantial sections of the absolutists’ rule book, Bertolt Brecht’s play is as relevant as ever, especially in a new adaptation by multi-award winning Bruce Norris (Pulitzer, Olivier and Tony Awards!) which can’t help but pull in contemporary references.

So many demagogues start out as comedy and accelerate to tragedy. Mussolini modelled his body language on the Italian silent film star, Bartolemeo Pagano the star of the Maciste strongman films most of which were light-hearted affairs and yet his primitive presence suited the needs of a “strongman leader” who need to communicate a simple message. So in Brecht’s play does Uri seek help from an actor in presenting himself: the walk, the posture, the use of the arms and hands… a chest-raised rigid fold of the arms after an extension of the left arm at approximately an angle of 70 degrees.

Tom Edden is hilarious as the drink-sodden actor hired to correct Arturo’s wayward body language and Lenny Henry is surprisingly eloquent in this regard, a lithe touch for a big man progressing from a relaxed jazz-age hooligan to power politician of firm stance: strong and stable…

Dictators: so bloody obvious, so crass… yet always underestimated in the rise. They are “resistible” and yet how often do they succeed?

This production reminded me of the Donmar verve of Cabaret (from 1994…) and the almost complete dissolve of the fourth wall by actors zipping around us, in the stalls and up in the gods, changing characters and singing snatches of songs new and old for the first bars of Human sung by Gloria Obianyo, to some Johnny Cash from Philip Cumbus: a cast of very fine voices accompanied by the multi-talented Ms Eaton on impeccable piano (she also sings, natch).

The play is of course all about groceries. Even in a Chicago of many distractions, a man’s gotta eat and who ever controls the supply of vegetables has his hand on the food-chain the underpins everything else.

Where there’s root vegetables there’s politics and the leaders of the trade association debate ways of neutering the influence of mayor Dogsborough (the excellent Michael Pennington) by appealing to his vanity in order to secure the loan they need for expansion in the docks.

Dogsborough is Weimar President Hindenburg who actually was gifted a country estate in exchange for favours in the East Aid Scandal. The programme notes include a list of overt references to the German political events of the thirties and it makes for painful reading.

Into this picture comes the gangster Ui (Henry) and his right hand man Ernesto Roma (Giles Terera) who keeps him, just about, on a straight course and out of any trouble he can’t handle. Ui’s squeeze is Dockdoris and he has a couple of psychotic lieutenants, the florist Guiseppe Givola (Guy Rhys) who’s not exactly smelling of roses and Emanuele Giri (Lucy Ellinson) who has the charming habit of wearing the hat of every man she kills.

The trade association tries to use Ui’s physical threat to control the situation but he and his troop are too smart for them at every turn, accepting every opportunity to move themselves onwards at whatever human cost: they are just more aggressive.

The resistance is led by attorney O’Casey (super turn from an adenoidal Justine Mitchell who’d I’d last seen in the Donmar’s superlative Kind Lear) but even the law is subverted through intimidation and thuggery and I’m afraid that an audience member was found guilty of burning down the Reichstag – sorry a warehouse… whilst another was killed in a clear implication of his guilt: you’d have hoped for better from a London audience but there you go… trust no one.

It was a performance of pure theatrical verve which the cast clearly enjoyed as much as the slightly startled audience. Props to director Simon Evans for the audacious staging and to his designer Peter McKintosh for one of the most pure-enjoyable and thought-provoking shows at this venue for some time.

Lenny Henry showed that he has completed his transition to the stage and after so much Shakespeare is ready to tackle anything; you completely forget that he’s Lenny apart from one moment of near corpsing when the audience member was made up bruised and battered!

The rest of the cast were uniformly excellent with Lucy Ellinson almost Joker-esque in her joyful psychotics and Guy Rhys, the fearsome florist, particularly good alongside Lucy Eaton’s snarky Doris.

Before the second half began we were joined again by Doris/Lucy again who asked us if we thought she’d survive the play: “don’t shoot the piano player” if offered… but there are no guarantees in this brutal World in which one man’s word is only as good as his ability to back it up with force… 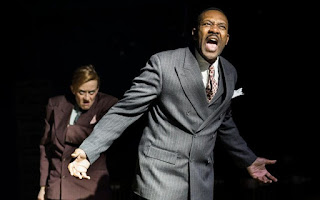 The Resistible Rise of Arturo Ui plays for another month – until 17th June. Tickets are available on the Donmar site but are very limited. Catch it if you can, a play for today and all those tomorrows we – collectively – let slide…