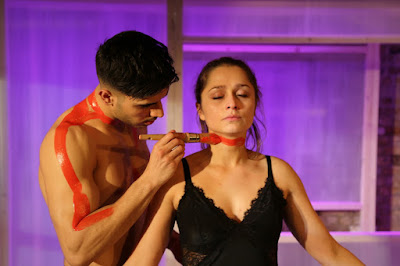 “You followed the fear of being forgotten and so did I…”

Theatre in the Arcola can often have a more visceral edge given the intimacy of the playing area but when a shirtless Moe Bar-el swung round at the audience slicing a real knife through an imaginary canvas well, you could feel the collective twitch. Bar-el is a very physical presence and that moment of rage was a key point in Marion Bott’s impressive new play.

Bott is a French-German writer, working in four different languages and she wrote Moormaid after learning that two of her former classmates had become radicalised and gone off to fight for ISIS, never to return. This is a now familiar tale but Bott was shocked by the banal views surrounding the issue: what really makes educated European men go to war in this “godless” age? Her solution to crafting an answer or at least an examination of the questions is ingenious and will live long in my memory.

Walnuts are cracked, knives are wielded, there’s dancing and body painting… as three characters go in search of their truth amidst the background clatter of faith, blinding routine and fear.

Sarah Alles is an experienced young German actor making her UK stage debut and, she is exceptional, able to convey so much through huge eyes that well-up with tears in an extraordinary physical display of micro-managed emotion. She reminded me of Isabelle Huppert in this respect and her grace, whether contemplating hanging herself with her favourite scarf or being, literally, flung around in the mighty arms of Moe Bar-el.

She plays Melissa, a disaffected artist who has run out of passion and is slowly killing herself teaching bored students in a Berlin college, whilst being married to someone called Simon (sorry Simons, but it doesn’t sound exciting…). She hasn’t painted anything worthwhile for two years and decides to end it all.

At eleven minutes past eleven (remember…) just as she’s about to fall from the living room table, there’s a knock on the door and she opens it to find Mehdi (Bar-el) a former student who she hasn’t seen for two years. Their relationship was more, and there are issues still rankling as Mehdi explains he felt he had to see her now, following a premonition: “you always said, you believed in signs…”

Melissa lets Mehdi sleep on the couch and as he prays he’s joined by his “brother” Khan (Ali Azhar – a French-Moroccan actor also making his UK theatre debut) who has somehow followed him. The two bicker over something as yet unspoken and before long we realise that Khan is dead or as they both say, “in-between” life and heaven with no sign of the virgins promised to martyrs. Whether Khan is a real ghost or not is immaterial (much like him…) as he is on Mehdi’s conscience and he’s not the only one.

Melissa wakes Mehdi up at 3:30 AM and gets him to start painting getting him to name his brush, hers is Calypso and his is Al Pacino. They paint each other’s faces and dance to modern music, aligned and alive for the first time in a while…

Khan appears again, Melissa doesn’t see him and the boys muck about like kids impersonating the great Pacino in Scarface: “you need people like me…” And, they are indeed people like Scarface having fought and, in one case, died, along with members of their family, in Khan’s case his seven-year old son. Khan was an architect and could have gone on to make his mark, instead he gave his life…

Melissa and Mehdi finally acknowledge their romantic interest in a superbly choreographed dance in which he lifts her up around and under in alarming fashion as they exchange panted dialogue: it’s very effective and dramatic proof of the beauty they can make. Only after this intimate connection can the two engage in the most heated of arguments. The truth will out, and you will just have to see the play to find out what that is.

Zois Pigadas directs with energy and invention and her three actors are full of humour as well as exuberance. This is a difficult subject and whilst Bott’s language dances its message around what could be an ugly confrontation the actors pull you in and you care about all of them. And, you have to, because all outrage aside, its only through the effort of understanding that we can make sense of destruction and alleviate the misery of constant negativity as all round we’re bombarded with mixed messages and attempts to create and channel hatred. 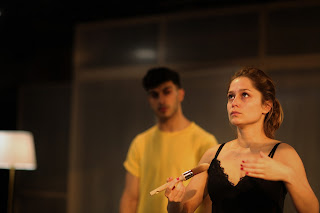 Sarah Alles is transfixing whether breaking walnuts with a whisky bottle, dancing or despairing and her physical/emotional interplay with Moe Bar-el is so very effective – a highly potent mix in the Arcola’s intimacy. Ali Azhar has most of the best jokes even though his character is dead; this ghost has a twinkle in his eye and a route to redemption.

Moormaid plays at the Arcola Theatre until 19th May and it’s not to be missed.

Ithankyou Rating: **** Guaranteed to make you feel, a wondrous cast.
Posted by Ithankyou at 14:53