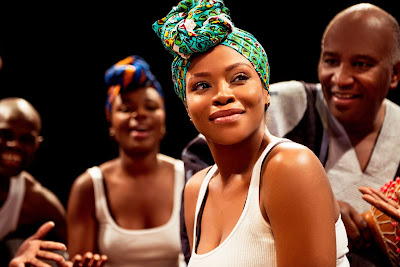 There are moments that transcend expectation and your understanding of theatre and as we clapped along to the musicians at feverish pace, standing with broad smiles all around the sold-out Arcola, this was undoubtedly one of them. The audience was so warm for this amazing and talented cast and there were in-jokes that sometimes flew around my head but that only reinforced the joyous connections between the watchers and the watched.

Who would have thought that a play about the most shocking of turns in a polygamist marriage could entertain so thoroughly and, most importantly, strike some important dramatic points concerning family, honesty and intimacy beyond the Nigerian location.

My (only) wife, was born in Nigeria but she left too early to experience much of the culture. This play features a mostly West-African cast who do justice to the accent, the style and the humour in a play that features Yoruba music, song and dance woven through the narrative with subtlety and purpose.

The play is adapted from Lola Shoneyin’s bestselling novel, by Caine Award-winning playwright Rotimi Babatunde. Femi Elufowoju, jr directs his company so very well making such good use of the Arcola’s main stage with performers everywhere, speaking, singing and occasionally breaking the fourth wall… tonight that wall had well and truly gone: we were all immersed in this hi-energy, rich-textured world…

Patrice Naiambana (fresh from a highly-successful run at the National Theatre in The Barbershop Chronicles) is simply spell-binding as Baba Segi a man with fixed ideas of squad rotation for his four wives. Naiambana has an immediate rapport with the audience and gets many of the laughs as the man some of the men might think has a good deal. At one point he announces – in character – that he’s about to play a completely different character and then knocks us dead with a sophisticated English accent as a dastardly yet debonair seducer… He can also play his own 4-year old son.

He is ably supported by four “wives” who are all fulsome characters. Jumoké Fashola plays Iya Segi, his wife of 16 years whose union was arranged by their parents as the young woman was far too fascinated by money and, seemingly not interested in men… unknown to them, she was rather more interested in a beautiful tomato seller who she had seen in the market. Baba was at a loss as a business man and given Iya Segi’s acumen, it seemed a logical solution to pair them off.

Second wife, Iya Tope (Christina Oshunniyi)“… a peace offering from a desperate farmer…”  and third wife, Iya Femi (layo-Christina Akinlude) married to escape her grandma’s tyrrany, impressing her future husband with her humility, as he saw it.

The line-up is completed by the latest, Bolanie (Marcy Dolapo Oni) a university graduate far more sophisticated than the rest and who, even in the crowded household, expects a different relationship with her husband – more accepting than the younger men of her own age, who pursue her: “he is content when I say nothing…” And, for long periods she had nothing to say having been brutally raped aged 15… the way of things but for all his posturing and faults, Baba has principles.

Bolanie disturbs the equilibrium in the Segis household like none before and soon Iya Segi and Tope are trying to turn their husband against her. Two years on she’s still around and in desperation they try to poison her only for things to work out in the worst possible ways.

Meanwhile, Bolanie has yet to produce any further children for Baba and, being a modern girl, decides to seek medical assistance and to take her husband with her.

There’s intrigue and shocks aplenty but there’s also honesty, love and songs… it’s light but with a serious side and is so well balanced in terms of its messaging – a splendid adaptation that allows each character to breath so that we care about them all in the end.

Marcy Dolapo Oni has great presence and lights up the room with her smile; everyone has their tale to tell but she is the one we follow the most. Patrice Naiambana is a force of nature with charisma to burn and pin-point timing. The wives are universally excellent, and Tania Nwachukwu is outstanding as Baba’s eldest daughter, another woman emerging into this complex way of living but still a child at heart.

The whole cast is energised with everyone playing their part(s) with multiple roles, daughter, doctor, singer, dancer… The singing and dance is thrilling with the percussion playing of Ayan de First and Usifu Jalloh mind-bogglingly ferocious… there is so much physical energy in this play and choreographer Kemi Durosinmi and Uche Onah should take a bow and a heel turn each.

It is a joyous collaboration and a play that will live long in the memory especially whenever I dance…and I should dance alot more!

The Secret Lives of Baba Segi’s Wives is presented by The Elufowoju jr Ensemble and runs at the Arcola Theatre until the 21st July. Tickets are going to be like baked Yams so you better get in quick! Details on the Arcola website and fromtheir Box Office. 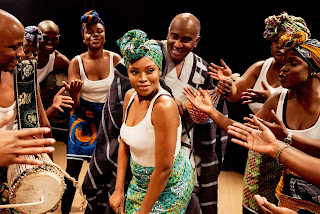