A riot of my own… Inside Pussy Riot, Les Enfants Terribles, Saatchi Gallery 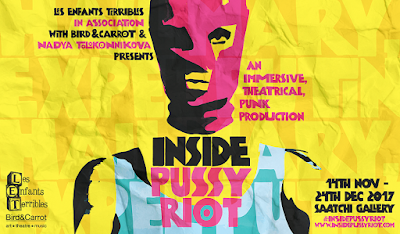 The stock descriptor for Inside Pussy Riot would be “immersive” and yet it’s more than that; you’re submerged in your own thoughts left alone with the realisation that nothing you experience in this wonderfully direct performance art is remotely close to the suffering of Nadya Tolokonnikova and the other members of Russia’s Pussy Riot.

Coinciding with the Saatchi Gallery's impressive Art Riot: Post Soviet Actionism exhibition, this show leaves you shaken and definitely stirred: it informs as it provokes, and you are the subject. I was Number 5 for an hour, I wore a red balaclava and I sat alone in the dark listening to Nadya talking about her actual experience in prison. She specifically asked me to use my voice more in future… this is the time to make a stand as the World drifts carelessly towards ruin.

I’m not going to give away the narrative as that would spoil so many surprises that I really wouldn’t want to have missed. Sometimes you learn through experience more than by watching and this, comrades, was most definitely a learning experience. More than that, it was a call to action.

Let us not forget…

1. It is 100th anniversary of the Russian Revolution: why do revolutions happen? Open question…

2. In 2012, Pussy Riot’s Tolokonnikova was prosecuted for performing 35 seconds of a song called Virgin Mary Put Putin Away – a direct attack on the Russian Orthodox Church's unequivocal support for Vladimir Putin – inside Moscow’s Cathedral of Christ the Saviour.  She was sentenced to two years of imprisonment, where she was faced with solitary confinement and humiliation, including regular forced gynaecological examinations.

The Art Riot exhibition includes footage of the performance at the Cathedral and I remember incredulity as well as pity for the reaction. It woke the World up to the direction Putin was taking and now, five years of election influencing and increasingly aggressive military posturing later we should be more than ever on our guard. Yet, we pull inwards and vote for a smaller, less caring view of the World with the worthless assurances of salesmen that “taking back control” and making our country “great” again is the solution to our fears.

Tolokonnikova believes in real democracy by which she means that which involves the people and she is urging us all to speak out and to stand up for our rights: together we are stronger than the authorities want us to be. She points out that if everyone tweeting in opposition to Trump took to the streets of Washington or wherever he’s playing golf that week, and demanded he step down, he would be gone very quickly indeed. 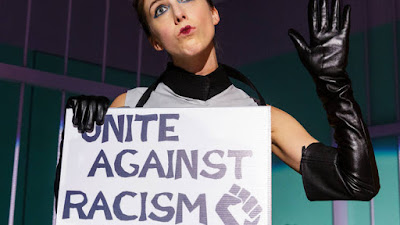 Yet, on most days we allow ourselves to be divided by petty squabbles stirred up and invented by social media manipulators or the billionaire-owned press. We have to stay focused and we have to be aware…

Les Enfants Terribles are an action-oriented, Oliver-nominated acting troup and they collaborated with Nadya to bring about this production. Staying in character an interacting with “civilians” must take some focus and they were superb as they confronted the slightly-disorientated audience and their occasional attempts to crack wise… (sorry!).

They were, to a woman, magnificent and, if I’m honest, quite scary! This started with a no-none sense induction from Asha Reid who I’m sure has a terrific sense of humour but not perhaps today. 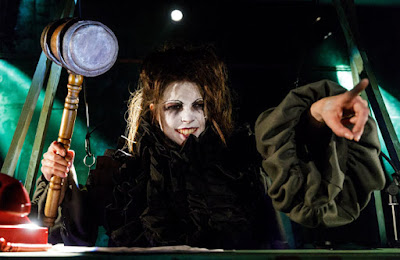 Beatrice Scirocchi provided the most genuinely shocking moment (although I’m not saying how) and Roseanna Brear made for the most insane of judges – think Helena Bonham Carter as the Red Queen on a double-dose of acid and you’re not even close. Alex Gilbert had us standing in line with not a whimper whilst Jenny Horsthuis has such natural authority I wonder if she’s considered a role in government?

The troop not only performed well they also played well with us as an audience group and that takes skill. They were a joy to watch and to work with and yes, Asha, I did return my pen…

You’re left feeling like you’ve been in a dream and this is indeed the most potent dose of mind-altering theatrical hallucinogens I've ever been given. By the end, in the words of The Clash’s Joe Strummer, I not only wanted a riot I wanted a riot of my own! You say you want a revolution? Don’t you know that you can count me… in!

Inside Pussy Riot runs to Sunday 24th December 2017 and it is one of the most important pieces of theatre in London right now and all year. I politely request that you buy tickets immediately! Do it. Do it NOW!

More about Les Enfants Terrible on their website here...


IThankYou Theatre Rating: **** They mean it man, and so should we!

Photos from Kenny Mathieson
Posted by Ithankyou at 06:46