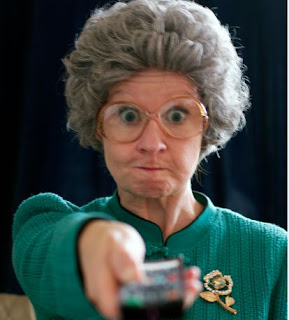 If you dream of waking with a waxwork model of Ken Barlow, swimming free with the Amish and making a documentary of your mother on drugs… this is the show for you’ve been waiting for! Kate Perry (no, not that one… although I’m sure she could be...) has a rare form of theatrical multiple personality order and so thoroughly does she inhabit her vivid characters, she all but disappears from the start of her show to the end.

In the stark set of the Hen and Chickens, Kate introduced herself and then, grey wig on and handbag slung over she instantly became Carmel, a pensioner so enmeshed with Coronation Street that she even has her hair done before watching the mighty Kenneth Barlow on screen.

Perry doesn’t just do voice and characterisation though, she has imagined lives of intricate detail for all of her characters. For Carmel, from Derry, the Salford soap has an almost mystical relevance with the first episode aired just as her daughter was born. After staring at Ena Sharples hair net she glanced upon the youthful form of the Street’s angry young man, Kenneth Barlow and thus began a half-century and more of dedication. But Perry doesn’t overplay her characters, she is comically restrained and that makes them endearing as well as believable and funny

Slightly more malevolent is Suzie Headley-Simmons, a 12-year old Home Counties misfit suspended from public school and intent on making a documentary on her drug-addled mother called Mummy on the Brink. Mother, a “Zimovane Zombie” is generally whacked on some prescription drug or other and naturally her daughter can only view this as YouTube gold… Throughout Suzie plays “herself” reading her diary which is a deceptively complex narrative sleight of hand… almost as if we’re the social worker listening to her confessions.

Next up is a grow-up, Marie a short-sighted butcher, who gets the call when her father suffers a heart attack, and she goes to see him in hospital. Marie reads an emotional diary as she relives her childhood on her Dad’s farm… again it’s confessional and ultimately shocking as her real feelings are gradually revealed. There’s a twist in the tale and it’s funny.

Now we were in the air being entertained by Bridget, a six-year old, who has observed far too much about her fellow passengers on an all too long-haul flight. Wearing a lion’s head hat and goggles, Bridget sips on a bottle of coke as she reveals her love of “Poley Bears” and money making plans for her Holy Communion. She also delights in pointing out how much the grown-ups have been drinking and asking just why some have spent so long in the toilets. A charming child…

Changing sex and multiplying the age by 7-8 times we get Jimmy a pigeon fancier from Bolton extolling the values of his return-flight heroes, covered in droppings and with the wayward, un-self-conscious demeanour of someone lost in their obsession. Jimmy is philosophically devoted to his pigeons and can barely discuss them without the far-away look of someone who’s heart flies up with them on every journey. Then again he may just be mad.

Talking of which, the last cameo is the most surreal and surprising as Perry emerges with white head dress and shawl as Mary Peachy-Bender an Amish woman with issues. M P-B has six “childrens” with her husband Ishmael and longs to be free with “Samuel”… This character was so subtle, Perry changed the narrative from slap-stick to romance and then something more as Mary swam free in the lake… a genuinely moving mime. It’s a dream of freedom for many but a far less commodified escape than most of us can imagine… We liked Mary and wanted her to break free. 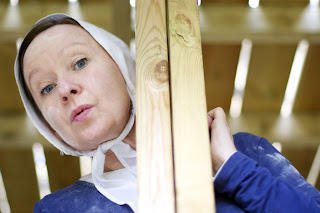 Around the World in six characters, it felt like we’d travelled far in just about 69 minutes. This is all testament to Perry’s skills as a writer as well as performer. She smuggles in some poignant meanings into these short character studies and there’s a universal concern with emotional honesty that brings the audience in close with each character.

Funny, heart-warming and totally engaging, it’s no wonder this show is off to Broadway as part of the prestigious United Theatre Solo Festival! Catch it if you can before it flies off like a pigeon!

The Very Perry Show plays until 11th so be quick! Details and tickets on the Hen & Chicken  Unrestricted View sitehere. 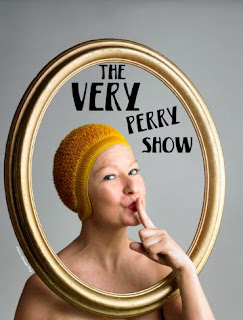 Photos from Annette Flynn.
Posted by Ithankyou at 14:22