Waiting for the woman… Grotty, The Bunker 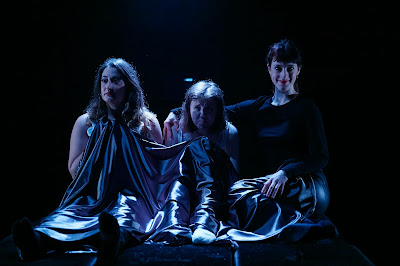 “You’re only free of this if you meet someone special… but that’s unlikely.”

If the purpose of theatre is to enlighten and broaden the mind, then Grotty does just that. It doesn’t quite tighten the ball-gag in your mouth and slap a dog collar round your neck, but it shows you a lonely sub-culture of torment and terror that is heartbreakingly close to home even for a middle-aged male reviewer.

The publicity sells it like it is: “Welcome to the desert. The London lesbian scene. A couple of little sad old basements that drip with sweat and piss…  The women in black… They are not nice girls. But this is not a nice story.” It’s a world of diminishing returns, a sado-masochistic scene that eats itself as the women gradually work their way around, overlapping and gradually “crossing each other out”.

It’s not all punishment and deliberated perversion though, some of the girls are in it for the love but it seems that our main character Rigby (played by the remarkable Izzy Tennyson who also wrote the play) hasn’t found that path and instead is being passed from woman to woman, a 22-year old lost in grief and unable to function emotionally. Tennyson is a quirky, very physical performer, often bent over, face contorted as she forces out her lines… reaching out desperate hands as her character longs to just touch someone with words that just can’t carry enough meaning.

At the start of the play she is seeing Marian Toad (Rebekah Hinds) who is nice up to a point but keeps the cruellest of company in the form of Natty (Anita-Joy Uwajeh) who through jealousy or sheer spite, constantly rides Rigby; “banter, the evolution of playground bullying…”

Toad dumps her by text, the latest blow to Rigby’s almost non-existent self-esteem but at least she has a genuine pal, Josie (Anita-Joy too) to build her up so that she can be demolished all over again.

The Witch once dated The Toad and Rigby feels almost like a conduit between the two, caught in between their sexual pride… there's a battle going on and she's on the front lines.

By now we’re wondering just why this girl is putting herself through so much misery… she only wants these women to show her affection and to hold her tight and yet must endure Fern’s almost poetic description of the luxury of punishment. Then, as Rigby says; “it’s actually a lot easier being an experience rather than a person…”

There’s some light relief as Rigby takes way too much cocaine - waaay, too much - and heads off to a party. She strikes out with one cropped-haired girl and shouts after her: “let me know when your sexuality catches up with your haircut!” … that’s one to cut and keep for later!

She also meets a quietly-spoken straight girl called Elliot (Grace Chilton again) who is not perhaps as straight as she thought… Yet somehow, Rigby contrives to let her slip through her fingers… for the moment. She needs validation “… everything would be so much better if I only had more followers on Twitter...” and things would clearly be better if she went for the girl in the bush rather than the one with whip in hand. But there’s another woman, one who has left a deeper impression on Rigby than anyone else…

Skilfully directed by Hannah Hauer-King, who uses the four sides of The Bunker’s stage space to move her performers around, Grotty is indeed grubby but not without hope and lighter moments. This is a completely alien world and yet the feelings and experiences within it are ones we all understand.

Izzy Tennyson (who also wrote Brute, Runts, Career Boy) has crafted a memorable character and one we really root for. Rigby is indeed the "relatable" lesbian that director and playwright have noted is usually absent on stage and screen. That she exists in such ostensibly extreme cultural circumstances is a triumph of the production and by the end we just want her to be happy.

There’s super support especially from Grace Chilton who’s “Witch” has her own demons whilst she is transformed as Elliot.  Anita-Joy Uwajeh takes the biscuits with three roles and Rebekah Hinds’ Scouse accent is 9/10 as the brassy Kate, Rigby’s straight-mate.

Tip of the hat also to Clare Gallop but I can’t tell you why… you’ll just have to see for yourself.

Grotty is on at The Bunker until 26th May and tickets are available from the BoxOffice and online. It's not easy but it is very much worth your attention and time.

IThankYou Theatre Rating **** You won't forget these characters in a hurry. Be kind out there. 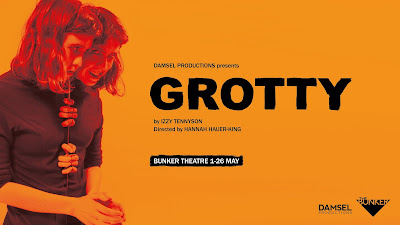