You’ve got to be in it to win it… Worth a Flutter, Hope Theatre 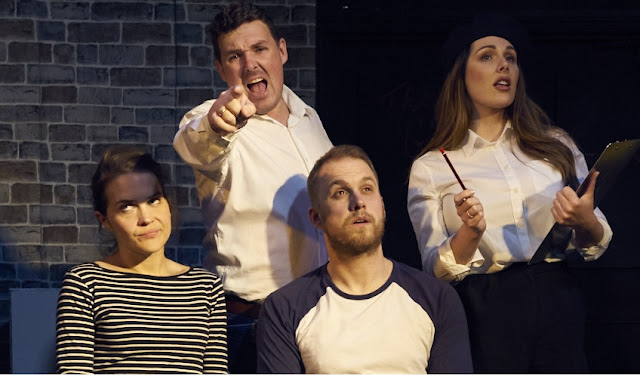 OK... Lucy Pinder bursts into the room wearing a kilt and playing the lead character’s very Scottish manhood… it has to be said, you don’t get moments like this very often in the theatre!

Michael Head’s play is crafted from his own experience – maybe not all of it, maybe even not “Hamish” – but it rings so true we were laughing as much with recognition as anything else. It’s a very honest play and told straight to audience and in the Hope’s intimate playing space, you have to really mean it to carry it through.

Michael plays Matt, a semi-professional gambler who’s engaged to the glamorous Paige (Lucy Pinder who has the most a-mazing hair!) mostly because Beyoncé encouraged her to hold up her hand and waggle her ring finger. He met Paige just as she vomited on his £100 shoes and ended up rescuing her from over-indulgence all the way to breakfast.

His best mate Paul (played by the irrepressible Paul Danan) seems to be spending a lot of time with Paige. He’s one of those blokes we all know; every class has one and “every convertible with the top down playing “urban” music, in February…” has one too. He’s the kind of man who doesn’t have to try to enjoy shallow relationships with girls although he did once have a Black Monday in the 90s when he didn’t even get a kiss.

Head’s writing is full of joyous lines that are a gift for this cast and they come thick and fast along with inventions such as Matt’s Caledonian c*ck and a horse race between the worst things to say on a first date including: “do you think I’m fat?”, “I love you” and “you’d make a lovely father”. The cast instantly switch roles for these set pieces and it works because we’ve all said such things even if the country of origin for our privates may vary.

Matt convenes at a café in Bermondsey with Paul and Paige and he’s clearly looking for a way out for, despite her glamour, Paige is not what you’d call a thinker – “like Dumb forgot to brief Stupid” but, as he tells Paul, “you don’t sell your motor if you ain’t got a bike.”

The waitress, Helen (Clare McNamara) is instantly at odds with Paul’s arrogance and Paige’s alpha posturing but takes more care over Matt… there’s something there. One thing leads to another and he has a coffee, the others leave, and he arranges to see her for a drink. Promising you think, and indeed, despite of the interruptions of her elderly neighbour (Mr Danan with a walking stick) the two spend the night together.

The next day Matt’s all aglow and has perhaps said something he shouldn’t in his enthusiasm… Helen is reticent and, this schoolboy error aside, we don’t know why. But then the play wrong foots us as another man enters the café called Sam (Jack Harding who I’d last seen in the excellent Foul Pages). There’s two sides to every story says Matt and we’re about to hear the other one. It won’t turn out well for everybody.

Sam starts the second act blinking into the lights, he’s not as funny as Matt but his awkwardness soon reveals his backstory and his relationship to Helen.

He’s married and struggling to connect with his beautiful but distracted wife Emma (Ms Pindar again) the two barely listening to the other, something driving them further and further apart.

He’s come to Helen’s café to take counsel from the only person he can think of, office Brent, Martin, a salesman with “the moral compass of a stag do in Ibiza” who’s only advice is bad advice and entirely based on his own experience. He recommends a one-night stand to Sam and, inspired, suggests that Helen would be ideal for various non-flattering reasons.

Sam’s unsure, he’s always unsure, reaching out to find himself after years of compromise – but then both men are. Helen’s response is going to be slightly different to her experience with Matt and the play is very nuanced in this respect… it will all come down to a metaphorical boxing match between the two which is as funny and well-wrought as the horse racing.

At one point Matt wonders if there are any heroes in the play, they’re only ordinary men after all… but if anyone is it’s probably Helen as we learn more about the reasons for her sharp tongue – she is absolutely brutal with Martin’s old sauce and gives better than she gets from Paul’s posing. I’ll have a coffee and bacon roll in any café she’s working!

Jonathon Carr directs smoothly and uses every inch of the Hope as the characters wheel around on horseback, in boxing shorts… in kilts! There’s a great spirit amongst the cast and crew – the Hope positively thrives on hard work and team-play!

The cast are clearly enjoying themselves and Clare McNamara is a superb slow-burner as Helen and her gentle expression is compelling and touching; real tears well up in eyes that light up with a smile. Not everyone can do this and she’s spectacular.

She’s not alone with Michael Head narrating his own words emphatically – likeable and real – whilst Jack Harding wins you over even as you’ve just been rooting his character’s rival. Paul Danan – damn him – is obviously likeable even as a rogue whilst I must commend Lucy Pinter on her debut stage performance; she’s very funny as well as convincing as the flouncy Paige, the bookish Emma and as Matt’s Scottish friend…

Tip of the hat also to Lauren Flynn on lights and sound who smashed it helping us to really believe in the Bermondsey!

Worth a Flutter runs at The Hope Theatre from 1st May to 19th May and tickets are available from the Box Office and online too: it’s another hit for The Hope and a big hearted, generous, spirited play.

IThankYou Rating: **** Rings so many bells it could be Christmas; see it for some great wordplay and committed performers. And, believe me when I say that “The Scottish Play” will never be the same again…
Posted by Ithankyou at 23:57