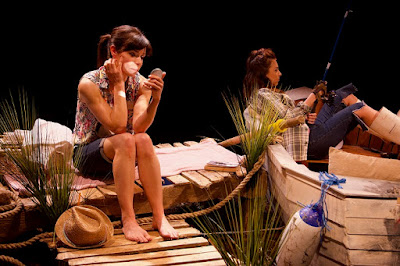 “I’m going to build a big wall between us right now baby and make you pay for it!”

There are long sections of this play that just ring so true. In the cinema of Michelangelo Antonioni there are frequently couples in the midst of an almost unsayable bewilderment as, say, Alain Delon tries to connect with Monica Vitti or Marcello Mastroianni tries to bridge the deep spaces between himself and Jeanne Moreau through sexual contact, words failing him.

Anyone in a long-term relationship has had moments like this and it doesn’t matter if it’s Marcello and Jeanne or Betty and Kendra: sometimes we are not aligned, sometimes we “hate” the one we love and sometimes we just don’t meet in the middle. So it is in this European premier of Audrey Cefaly's unflinchingly honest and compelling play.

Betty (Anna Acton) has lots of things to say, she has a lot of questions but her taciturn partner Kendra (Louisa Lytton) is not easily moved: “I’m not the answer, baby. I’m not. I’m just me.” Betty has dependency issues and Kendra is tough on the outside and pretty tough on the inside too, lounging back on their fishing boat drinking Bud Light and batting back most of the conversational gambits thrown her way.

Their boat is moored in Alabama somewhere in the Gulf of Mexico, a favourite spot for Kendra as the fish get more traction in the shallows and the hunt is commensurately more fun. Kendra’s the one with the rod but Betty is also fishing… for compliments, for a reaction and for reassurance: she’s having about as much luck as Kendra with only a tiddler to show for her efforts.

The pace is slow but it’s a sunny day and there’s six years of shadow boxing to allow for as our two lovers also show they’re fighters. Betty has to fill the spaces with seemingly inane talk about Delores Pedaway’s fifteen cats and how a woman on welfare can possibly afford to feed so many felines. Delores and her cats are a recurring theme as is Betty’s attempt to get Kendra to think about a different career than her current occupation as a sewage worker. Betty has a “self-help” book she refers to as a career-path workbook… it’s helped her decide to take up social work and she’s turning its life-changing light onto her girl.

It’s an attempt to engage which Kendra feels is a part of Betty’s condescension… they both under-rate the other’s feelings for them and whilst this makes Betty reach out, physically and emotionally, it sets Kendra on defence mode. But, as they pick away at each other’s weaknesses, it’s only a matter of time before the barriers are down and the two engage in more heated discussion of well-worn themes. Sometimes an argument is the only way and I say that as the guilty one in many a dust-up caused by practiced inattentiveness.

Then, as the day wears on, there’s a real crisis as the boat’s motor is tangled in weeds and the prop pin is snapped; the two women work together to fix the problem, Kendra calming the panicky Betty and the two warming up to act as a couple: we see why they are.

But it’s not the end of it… there are issues still to unfold and we’re as unsure of the relationship as the women themselves. Whatever the future holds for these two, you’re rooting for them. This is in no small part due to excellent performances from the two leads who are both so subsumed in their characters. Their timing is perfect and that’s the hardest part to get for a convincing relationship – Betty and Kendra think they’ve heard it all before but they either have and not listened or they’ve been deaf to the gradual evolution of the gulf between them.  The accents are spot on and the emotional turns are deftly made and it was only during the rapturous applause at the end that we saw the Lytton smile on full beam. Job well done both!!

Matthew Gould directs well, intuitive relationship spats take much hard work and the setting is irresistibly intense: we’re stranded on that little wooden boat with them… You have to hope for the best and that’s the best you can hope for.

The Gulf plays at the Tristan Bates Theatre until Saturday 5th May and I reckon you should buy a ticket to share in an experience as universal as it is personal. Tickets availablefrom the box office and I would expect this one to be a hot one.