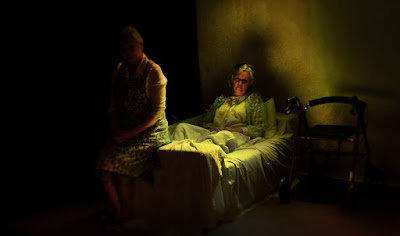 It’s better to burn out than fade away as old Neil Young observed from the safety of his thirties… yet how would you feel if you’d done both? Sixty years after her silent flame flickered so brightly did Louise Brooks spend her days in doubt and remorse?

As with politicians, actors’ careers often end in failure – a life measured by success, commercial and critical popularity, appreciation of your talent and your looks (although I think we’ve all got to contend with that…). Few had the visceral, visual impact of Louise Brooks nor the unique combination of intellect and beauty than enabled her to transcended the self-made mess of her Hollywood years to become an icon; her posters and postcards the gateway experience to a face that still compels attention and repeated viewing.

Leslie Mildiner’s new play American Venus takes the title of one of Brooks’ (mostly) lost films to tell the tale of her life as she lives out her final days in the bedroom of her Rochester apartment.

Mildiner bravely takes on the task of recreating one of the most complex personalities in film and succeeds in presenting a version of Brooksie that rings true not just from a fans’ point of view but on a human level.This is in large part down to a titanic performance of wit and integrity from Susan Penhaligon who's Louise fights against the dying of the light in her own way: denying her usefulness and importance, putting down her carers and long-suffering friends as she is slowly weakened by a combination of emphysema and a heart condition.

Penhaligon’s delivery is pitch perfect and out of every excruciating coughing fit she flies with stinging one-liners striking out at herself and those around her.

She has dreams of her past and relives the brief affair her younger self, played by the sparkling Angharad George-Carey with elfin energy, had with Charlie Chaplin in 1925 New York. Brooks was 18 at the time and a dancer in the Follies just about to embark on a movie contract with Warner Brothers. There’s no evidence that she thought Chaplin was “The One” but in the play their relationship is used to show the intensity of Louise’s character – her near limitless possibilities the near-equal of Chaplin’s own…
Tim Walton (who I’d last seen in the excellent City of Angels at the Donmar) plays Chaplin as a charismatic, muscular intellectual who is fascinated by the young woman’s refusal to submit to his will. Chaplin has just become a father again but Louise is unimpressed, she is a self-sufficient unit who will make her own mistakes with no room for phony sentimentality.

Mildiner appears to suggest that a combination of harsh parenting and her sexual abuse aged nine, may have made Brooks the unyielding truth-sayer and performer she was – who knows? She certainly seemed capable of inspiring loyalty and was supported by financial contributions by an ex-lover for the last few decades of her life.

Here she is cared for by Phylis (Mary Keegan who is also superb) who is stronger than anyone suspects, ignoring Louise’s art of misdirection and trying to do the best for her. One hopes that Brooksie did indeed have such a steadfast supporter.

Louise rides Phylis hard but this seems to be part delusion and part thank you… Phylis’ husband Frank (Brian Deacon) is not as strong as the women and whilst he makes himself busy Louise always has something more for him to do.

Louis has a friend Stan (Nicholas Waring) who collects her library books and brightens her day with his tales of romantic failure. He leads with his heart, something Brooksie would never do, and as a consequence is constantly disappointed by the men in his life. His latest lover is clearly only after his money and a green card… he leaves him in the end for a woman. Poor Stan, if only he had a tenth of Louise’s spirit.

Another visitor is the librarian Tara (Sophia Swannell) who arrives initially to complain about Louise’s annotating the books she borrows with corrections and other “helpful” observations (including one concerning Tyrone Power that I probably shouldn’t repeat in writing). She stands her ground and is accepted.

Louise is invited to be guest of honour at a retrospective screening of six films at Eastman House and has to be cajoled into going by Stan, she weeps at the sight of herself in Pandora’s Box… like being “present at her own autopsy…”

Directed by Sarah Berger who makes splendid use of the limited space of Fred’s Place this was close-contact theatre with every emphysematic fit making the audience squirm. I have no idea how the performers can stay so focused mere feet away from their audience but if you want to see how actors really work this is the place to be.

Louise’s passing was felt most pertinently by Phylis – I won’t give away exactly how – but her message of obstinacy in the face of incapacity is a call to all to be true to themselves and to treat the twin imposters of fame and failure just the same.

Don’t waste it… and I’m pretty sure, Brooks, for all her trials, never really did. There are no doubts from Louise who’s only regret was growing old and hating it: if all you wanted to do was dance why love life when you can’t do what you love anymore?

American Venus is part of the Ever Hopefull Repertory Season of plays which completes at Fred's Place today… it deserves a wider audience and hopefully will get another airing. There's a short video about the season here.

Keep an eye out for further events at No. 6, Fred’s Place and from the So and So Arts Club. It's the most intimate of venues in a side-street Georgian townhouse where Disreali worked in the 1820's and we almost felt like intruders as west end tales were passed around the room... a real treat! 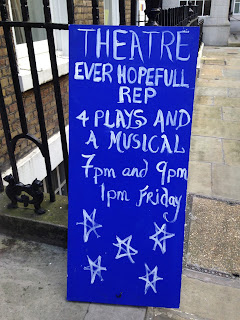