The programme notes highlighted a connection between Ireland and Russia that I’d not previously been aware of. Irish play-write Brian Friel, clearly saw parallels between Ivan Turgenev’s 1863 novel and the turmoil in Ireland decades after partition and the famine: just as Tsarist Russia was well into the long gestation of its revolutions so too were the Irish starting to organise their thoughts around the ideas of alternatives to authoritarian rule from afar.

In both countries there was a disconnection between the intellectuals and the masses they wished to help. This was evidenced by the well-intentioned To the People movement in Russia which singularly failed to politicise the peasants…
So it is that the two young men at the heart of the play fail to engage their friends and relatives in their thoughts of nihilism: complete re-invention of every facet of a society they see as almost entirely pointless.
Arkady (Joshua James) is the more easy-going of the two but is in the thrall of his powerfully intelligent pal Bazarov (Seth Numrich), winner of the university oratory prize for two years running. They have been in St Petersburg for their studies and are now returning to Arkady’s home after their graduation.
They find the country estate little changed, gently run down by Arkady’s likeable but bumbling father Nikolai (Anthony Calf) but the old man does have one rather substantial surprise: he has had a new baby son with one of the servants Fenichka (Caoilfhionn Dunne).  If that’s a hint of some change in gentile society, the discourse between the graduates and those in the house soon shows the broader polarisation.
Arkady accepts his father’s situation and is delighted for him, smiling explaining that he has become a Nihilist but, whereas, he might be all for a rational restructuring of society, Bazarov wants to tear things apart. He is fiercely intelligent and provocative, instantly making an enemy out of retired soldier and former dandy Pavel (Tim McMullan): “The Clothes Horse” who’s lazy middle-brow intellectualisms he rudely punctures.
The quiet life of the estate is disturbed still further by the arrival of new neighbours, wealthy widow Anna (Elaine Cassidy) with her younger sister Katya (Phoebe Sparrow) and their inherited relative    Princess Olga (Susan Engel) – a marvellously disconnected example of Grand-mother Russia.
Anna is a strong character in her own right and forces Bazarov to raise his game in defending his politics. He doesn’t believe in love, just free will and has already coerced his more reticent pal in to drawing up a list of fanciable women which soon includes Anna’s sister.

Sexual tension pervades the whole play from the earthy desires of the maid Dunyasha (Siobhan McSweeney ) through Fenichka’s repression – is Nikolai a compromise for safety’s sake? – and on to Anna herself. Much of this tension focuses on the rakish Bazarov but there are a number of triangles in play… 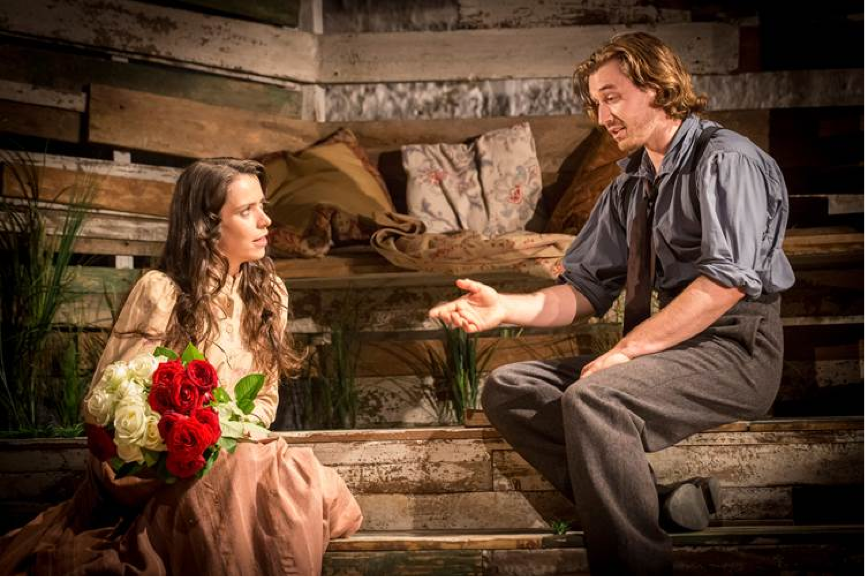 The scene shifts as the young men visit Bazarov’s humbler home. His father Vassily (Karl Johnson) is a care-worn, sparky but scatty doctor whilst his mother Arina (Lindy Whiteford) has the wearied eyes and concerned stillness of someone who has watched one man burn out and expects more of the same from his son. Bazarov too has trained as a doctor and, whilst he loves his parents deeply, he can hardly bear to be in the same room as their expectations.

He goes to see one of his father’s patients and whilst he’s away they learn from Arkady of his successes and can hardly contain their pride. But they know they cannot share this seemingly innocent joy and when Vassily offers to invite Anna around and asks Arkady to stay for the Summer, their son says he must leave the next day: he hasn’t seen them in all the time of his study and even this one day is almost too much.
So, the characters are all in place but what future is there to be for this supremely gifted man who does not even believe in love? The second half of the play shows Bazarov’s passions running deep as he does indeed fall… for Anna. Anna reveals a background far more humble than Bazarov and that she had married well to a man she respected: more compromise out of necessity. Will she and Bazarov be able to break free of their self-imposed emotional isolation? And what will Bazarov actually do when the time comes to show courage…?

I won’t give too much of the story away: just go see it and/or read Turgenev’s novel (which I’ll have to now I’ve said it!).

Lyndsey Turner directs with surety what is a highly-charge and disparate narrative and marshals her substantial cast of characters very well giving each the room to reveal themselves from the leads to great supporting turns such as Piotr the selectively-deaf young hip coach boy (Jack McMullen – recently in Jimmy McGovern’s excellent Common) to David Fielder who succeeds in playing the Old Retainer roles for both houses – he’s marvellously grumpy as Prokofyich in particular.

The play is so full of potentially rich characters that I’m not sure it entirely succeeds in revealing them all. Bazarov’s leap to love happens suddenly and, it has to be said, predictably but his subsequent actions are entirely in keeping with the man of courage we hoped him to be.
Perhaps Arkady’s character is the key: a decent man who cannot quite escape his background but who is desperate to do the right thing? His way is evolution and not revolution… which solution could work better for Russia or for Eire?

The cast are excellent all round and it’s a privilege to see them working at the close quarters afforded by the Donmar stalls. I expect that we’ll be seeing a lot more of young Seth Numrich and Joshua James in particular. Plaudits also to the stage design of Rob Howell who manages to make the most of the Donmar’s confined space with economy and stylish invention. The music from Alex Baranowski also underpins the narrative very well with impressive drive and tonal variety.