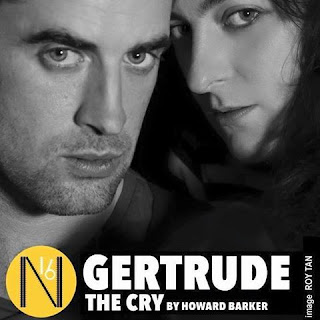 “The cry isn’t in you; it’s outside you…” exclaims Claudius who earlier on had talked of the religion of his lover’s sexuality. Gertrude is a force of nature and this richly-textured play is in raptures about the language and the act of sex, love and bloody life.


This is a revival of Howard Barker’s extraordinary play which had its world premiere in the great hall of Elsinore Castle, a building Barker’s Hamlet wants to rebuild in glass so that there are no hidden corners for secrets or smuggled meanings.
Here Gertrude’s loyal servant, Cancan (Stephen Oswald) talks of walking the maze – a maze of meaning? This is one where I need to write carefully: I’m out of my depth and to paraphrase this Hamlet: “there are things in this World I don’t understand but others understand them entirely…” I think this is a play you need to see twice: the first time to allow the full visceral force of the ferocious performance and the second to pick the bones from Barker’s labyrinthine word-play.

In this respect, there are similarities with Tom Stoppard’s expansion of two characters from the same play, Rosencrantz and Guildenstern are Dead. Stoppard looked for meaning in the lives of two plot devices who are stuck in an existential spiral as helpless as the coins they toss to alter the course of their lives whilst Barker has a freer approach in seeking out the motivations of Gertrude: the mother who so bewildered her son in marrying his father’s brother so soon after his father’s untimely death. But his approach is more counter-factual: what if…?
No time is lost in the revelation of the nature of Hamlet senior’s death and his widow-to-be’s role in it...I had always read it that Claudius was the ambition and the cruel drive but here it is not so: he is in thrall to a higher power and that is Gertrude herself.
Theatre N16 is an intimate space and the audience was left reeling by the opening moves as the sexually-charged coupling of Gertrude (Izabella Urbanowitz) and Claudius (Alexander Hulme) indulge in murder as erotic sport, poisoning their man before stripping off and consecrating their transgressive love on his dying body. A few hours before I’d been stuck in a particularly dull spreadsheet, but all thoughts of budgeting were blown away never to return for the rest of the evening: nothing was held back – this was a crime of passion in every sense.
The relationship between Gertrude and Claudius explodes the original characterisation to present a couple deeply in lust and driven by a primal urge to succeed, to live and to rule: their bond based on boundless sexual fascination.
The body of his father springs up to be revealed as Hamlet (Jamie Hutchins) who declared himself surprised at not feeling “it” more… he imagines he will grieve later; his mind a maze and his speech always obfuscating meaning, this Hamlet is  already playing the fool – a figure of unknown capacity and uncertain threat to the royal couple. People always give the Prince a hard time for his hesitations but in this psychotic environment how else could he survive?
Other players emerge, Claudius’s mother Isola (Liza Keast) who begs Gertrude to leave her one son, knowing how destructive such a woman can be, having perhaps been one herself. She is Gertrude in thirty years having survived the ravages of rule with delicate cunning and feminine power of her own.
She chides Gertrude’s mourning skirt as being too short whilst admiring her long legs – she is always dueling with meaning and careful feminine challenge. But this is Gertrude’s hour and, power coursing through her; she encourages Claudius to perform another transgressive, and very public, display of affection at the funeral.
Hamlet’s sort-of girlfriend, Ragusa (LJ Reeves, whose red hair becomes almost a character in itself as her narrative develops…) is surprised at how this family speaks so forcefully true – there is little time for mourning and even love and always they act impulsively, even Hamlet, shockingly in the end… his soliloquies more circular and to the point than in Shakespeare: in musical terms this is not pastoral-progressive- folk but punk – a cry of truth with no bushes beaten...

Cascan provides a commentary on proceedings and Stephen Oswald’s Scottish burr grounds the words in sinister reality – Elsinore is a harsh place much like our own. He is fiercely loyal to his Queen bound to her as much as any man by his own form of love.
Claudius seeks his counsel, struggling to understand how, so soon after their exultant victory, he no longer hears Gertrude’s “cry”… has her passion out-matched his? He is blown away by the force of her and kindly love is not what she needs.
Hamlet’s friend, Albert of Mecklenburgh (David Zachary) attracts Gertrude's attention and is willing to reciprocate as deeply as physicality will allow. His is still a youth and she is now pregnant but they find an erotic approach that feels like more like a negotiation than sex.
Perhaos the cry is for survival as much as for the affirmation of life (and sex) and in such a febrile environment survival is in flux and characters die in the matter-of-fact ways of a war – animals in the grip of forces they hardly comprehend.
It’s a wildly-thought-provoking ride and one of the most audience-challenging productions I’ve seen: no one feels safe in this space and you cannot fail to be engaged as you respond to the emotional exposure and devastating betrayals in close-proximity.
Chris Hislop directs with chilling assurance and brings out the best of his extraordinary players. Izabella Urbanowitz gives her all as a regally-raunchy Gertrude for whom Nature no doubt is her goddess whilst Alexander Hulme’s Claudius is her equal and yet, held back by his own manhood, he cannot, finally, keep pace.
You have to see it. I doubt there’s a more incendiary play anywhere in London.
The show was produced by Andrea Leoncini and Jamie Eastlake for LWL Investments & Entertainment Ltd and Theatre N16 as part of Shakespeare 400. A richly-rewarding evening just three stops down from Victoria at the famous Bedford public house - historical home of alternative comedy and the darker elements of South London entertainments...
IThankyou Rating: ****