"Give me a rose to show how much you care…" Savage, Above The Arts Theatre 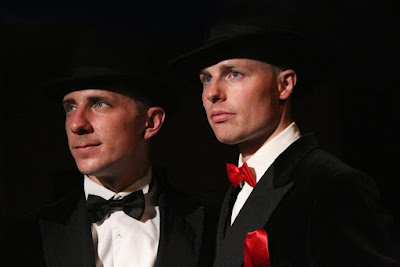 A rose is a rose… you can’t turn a rose into an orchid and it’s a rose, so why would you ever want to.
Claudio Macor’s latest play tackles the attempts by Danish Doctor Carl Peter Vaernet to cure homosexuality. He believed – against almost all medical and psychiatric advice of the time - that same-sex attraction was a disease which could therefore be medicated, treated and “eradicated… He believed that by injecting testosterone into both testicles, without anaesthetic of course, he could alter the laws of attraction.

Naturally the Nazi’s were highly interested in this barbarous tinkering and supported the mad Dane in his experimentation in the hope of freeing more room in concentration camps for other “deserving” minorities. Sadly, even when the war was over, the British also sensed an angle and funded his flight to Argentina where he died, un-ashamed in 1965.

But what of the lives and loves his merciless needles ruined? Macor prefers to believe in the Doctor’s ultimate failure as love holds stronger than the sharpest needle and the most painful procedure. More than this love conquers even the Nazi’s themselves as one of those abused strides off in proud defiance leaving his closeted lover and abuser to face his conscience alone. 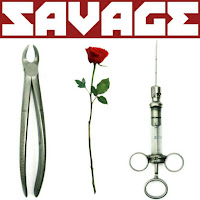 This is an unflinching, honest play that is strongly played by a physically and emotionally fearless cast. At a time when even one of the would-be leaders of British government once supported the cause of a modern day “gay cure” it’s a reminder how cautious we must always be in accepting progress: vigilance, understanding and compassion must define any contemporary culture.

The play starts in stunning fashion in The Corner Light night club,  as the host Georg Jensen (Lee Knight) performs Lili Marlene gradually pulling off his drag as the words stick in his throat with the realisation that he must leave his love and all this behind. Denmark legalised homosexuality in the thirties but once they accepted German occupation in 1940 everything changed.

The song is a cry for loss of love and liberty made all the more passionate by our knowledge of what comes next. It’s a German song but nationality doesn’t matter; only truth and joy.
Two lovers leave the club, American Embassy attaché Zach (Nic Kyle) and Danish art gallery worker Nikolai (Alexander Huetson); they are walking a dangerous line in this new cultural reality and as they share what a few months ago would have been acceptable affections, they know the future is bleak. They talk of the future and ways to escape to be together but a stray embrace is caught in a spotlight and they are arrested.

We cut to the surgery of Doctor Carl Peter Værnet (Gary Fannin – late of the Reduced Shakespeare Company) and his prim nurse Ilse Paulsen (Emily Lynne) for whom looks will prove to be deceptive.  Værnet’s loony tune is sexual normalisation via genital injection… the practice being a perfect signifier of the intent.
Eager to invest in medical experimentation the Germans are all too willing to provide gay guinea pigs. General Heinrich Von Aechelman (Bradley Clarkson – Jimmy from Macor and Andrea Leoncini’s wonderful tribute to silent film great Billy Haines, The Tailor-Made Man!)  brings Nikolai to the surgery and with his approaches to Ilse and plan for sexual-cleansing he appears to be a full-blooded, compassion-free Aryan… and yet, the General is quite different at home.

He has “rescued” Georg for his personal service and the two enjoy a bizarre relationship of necessity – the General genuinely feels for his man but you sense the true power is always with the defiant younger man: even imprisoned and with no chance of escape Georg never submits his soul. 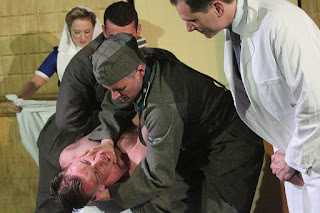 Meanwhile, the Doctor brings out his big needle and in the play’s most painful sequence we see his operation on a desperate Nikolai. It’s hard to watch but well done to Alexander Huetson lets rip in the most convincing fashion. As a man we were squirming in our seats but this actually happened: people were stupid enough to believe this would work and callous enough to put it into practice.

The result is proclaimed as a success by the deluded Doctor as he presents Nikolai with another naked prisoner – Georg. Nikolai’s failure to respond is hailed as proof of concept even though the poor man can barely stand. Now we see Ilse’s true colours as she rescues Nikolia who is not “cured” but broken, incapable of survival on his own. She contacts Zach… who telephones his man from America but as the years roll and the war progresses… is there hope? Will even Zach and Mikolai’s love survive the Doctor's brutal injections…?

Post war, British Major Ronald Hemingway (Christopher Hines) interviews the Doctor and is intrigued enough by his “cure” to affect his escape to Argentina…
The plays relationships wax and wane with their components breaking and falling whilst some remain true. Zach escapes to America but he still suffers in a different way to Nikolai whilst the General wants the one he does have... but can never truly possess. The Doctor’s relationship to his subjects, co-workers, collaborators all vary and yet it is his relationship to the truth that never wanes. He is deluded in the most self-absorbed way and the play doesn’t need to linger on his motivations: they remain obscure, fatuous and hateful.

The cast generates an almost frightening intensity in the close proximity of the Arts Theatre's upstairs stage. Lee Knight makes for a defiant diva whose sensitivity is matched by his strength and glamour (strength through glamour: there's one you never thought of Herr Goebbels!) whilst Bradley Clarkson gives his General a tragic desire behind his cowardly devotion to duty: no wonder his character hates blondes.
Nic Kyle’s Zach exudes positivity and get-up-and-go which increasingly runs counter to Nikolai’s torments: Alexander Huetson’s role was physically the most demanding and gives the play a visceral unease that brings the audience closer to its subject.

Emily Lynne’s Ilse offers sympathy and the quiet rage of a nurse forced into acts that harm not heal whilst Gary Fannin’s Doctor is a man adrift from morality and confounded by delusion. There is also vibrant support from young Kristian Simeonov as Goran – a cabaret dancer turned soldier and Christopher Hines as Major Ronald Hemingway whose British charm hides his hollow opportunism.
Human rights campaigner, Peter Tatchell explains in the introduction to the play how he had uncovered this story. It took him some time to persuade the Danish authorities to release papers concerning Værnet’s crimes and, as yet no explanation or apology has been forthcoming from either Denmark or Britain for allowing this war criminal to escape justice.

The play ends with the image of Doctor Carl Peter Værnet projected on the stage – we know you now sir and we won’t forget you. Nor will we easily forget this play.

Savage plays until 30th July and tickets are still available here but you better be quick! In these times of unrelenting press propaganda and a push towards more narrow-band nationalism it’s a vital, challenging night out - one that will leave you shaken, stirred and resolute.