Something better change... Kicked in the Sh*tter (2017), Hope Theatre 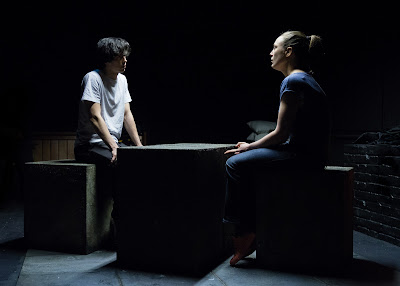 Author Leon Fleming and director Scott le Crass worked on last year’s Sid which showed how the anger and anxiety of forty years’ ago was still relevant to today’s alienated youth. Kicked in the Sh*tter – surely the title of the year, especially when the call went out for the start of the performance! – picks up with a more specific examination of the causes of our disaffection in this care-less age: the War on Welfare and the return of concepts of a "deserving" poor.

But the play doesn’t follow any easy lines and Fleming challenges your perceptions throughout, as James Clay’s character says, he may be playing a tune but he’s not on the fiddle. The system is rigged so that you have to sing the song and that’s just another of the ways in which self-respect is eroded.

The story concerns two nowhere-near-just-about-coping siblings in inner city Birmingham and jumps back and forth between their teenage dreams – chatting over a large bottle of illicit Lambrini about their problems, their parents and the future. She is played by Helen Budge and he is played by James Clay.

From the start elder sister sets the agenda and younger brother kind of follows in his own messed up way. He has mental health issues and has self-medicated from teenage onwards using and abusing drink, drugs – both prescription and under the counter. Depression makes him believe he cannot work and he lives in the terrible shadow of the dark impenetrability of his condition – he can’t live with it and he can’t live without it – mutually-assured destruction is the only cure he can believe in although he’s absolutely well enough to not wish that on himself… he may have “tried” it once but as he says, if he really tried he’d be dead.

By contrast, big sister is a carer for their mother as well as her two young children from a long-departed father. She really wants to work but can’t make the time as there’s no one to look after the children or her mother; she is in a cycle of poverty that leaves her in one heart-rending scene pleading with the “social” after spending her last tenner on electricity… she has no money left for food but has been docked her income support for refusing to take a job. These sanctions rob her of money and respect but she has no one to back her up, least of all her brother who is trapped in his own pre-medicated loop of no confidence: the drugs may work but they don’t make him work. Maybe all addiction is a Möbius strip that reduces willpower along with the anxieties the medication is designed to suppress.

As the pair go through their own income support assessments Fleming illustrates dispassionately how the process fails almost all-comers. She can – possibly – obtain income support if she declares herself a carer but this won’t be any more than the Job Seeker’s Allowance that is suspended and besides, she wants to work. It’s a vicious cycle that fails to address the real issues.

In the end something has to give and it is she rather than he who comes close to oblivion. As she recovers from her suicide attempt suddenly her brother steps up as much as he can but maybe more than he thought… looking after the children and supporting her as best he can.

This is no fairy tale ending but there is hope as he talks honestly to his sister, perhaps emboldened by surprise at his own usefulness.

In a very powerful moment we see her talking to a psychiatrist about her brother’s weakness and self obsession: her illness has seen him address her situation through a prism of his own psychosis… but she recognises he’s grown up a bit too.

Believably real and so effortlessly genuine, Kicked in the Sh*tter is as full of hope as despair and is quite brilliantly acted by the two leads.

You can hide away in the Garrick or the National but in the Hope every inflection can be caught and any false thoughts can betray performers. Budge and Clay are more than up to the task and thoroughly convince throughout in this vital, provoking play for today.

You’re drawn inevitably to Budge, her character caring and single-handedly keeping her family afloat and she gives a fierce, desperately honest performance of grit and vulnerability. Clay is also mightily impressive as the man with younger-brother syndrome (I know!) who is self-deluded and self-medicated in equal measure until the time comes to finally start lifting himself up.

There’s hope but we all need help. As a band* that frequently played in the Hope’s basement used to sing; Something Better Change. 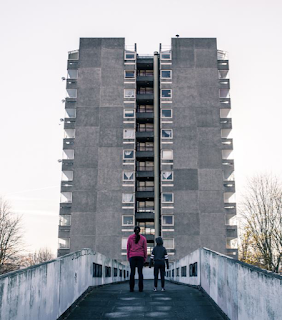 Tip of the hat to Justin Williams’s inventive design and the direction which made Helen do most of the lifting - so typical! Teresa Nagel also did sterling work with the lighting and effects… you can see how everything works so well at the Hope!

Kicked on the Sh*tter runs at The Hope Theatre, Islington, N1 1RL until 8th April – I would urge you not to miss it! Book tickets here. 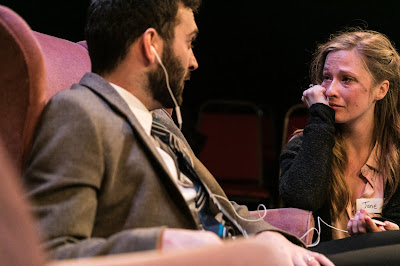 A love that endures even through catastrophic mental disease. How many have to endure the loss of their life partner and what can be crueller than their lover gradually becoming absent – crumbling away in unexpected parts as memory and reason simply disintegrates next to them in bed, over the breakfast table or in the sitting room as you watch the TV shows you shared become strangers too.

Music as much as smell evokes memories although I guess it depends on your wiring; after all, some people can actually see sound whereas most of us just hear it. But even for the neuro-typical brain, music sneaks straight past reason to the subconscious and sparks the remoter corners of the cortex with the feelings of the forgotten.

But when your memory starts to fade, when you’re sick with Alzheimer's Disease, how is music felt then?

In Other Words is Matthew Seager’s first play and was produced during his final year at university after life-changing work experience in a care home for people with Alzheimer's Disease. It is some achievement both in technical terms as well as emotional.

The play tells the story of Arthur (Matthew Seager himself) and Jane (Celeste Dodwell) or rather they tell their own story, leaping backwards in and out of key moments of their relationship to address the audience directly. The story cleverly flashes backwards and then heads forwards as we see the latter stages of Arthur’s condition – head and body dropped, barely able to talk, incapable of recognising even his wife – then jump to the couple’s initial meeting: Sinatra, a chance accident – spilt red wine – and the humorous recollection of a long love affair’s youthful beginning.

Arthur is a Sinatra man and Fly Me to the Moon is his and subsequently Jane’s song – it is the song that played when they first danced and when they first kissed: the moment when they both knew. It is music he always summons when they have troubles as Frank and Nelson Riddle's orchestra smooth over any temporary disconnection and the couple hold each other close and dance. Singing is, however, not allowed on account of Arthur’s wayward approach to pitch and tone.

It’s these snippets of everyday marital discord that keep the play real and the chemistry between Seager and Dodwell make them all the more affecting: these are the faux conflicts of healthy marriage and are all the more bittersweet for what we know must come.

When the first signs of Arthur’s impending issues begin to appear they are rationalised and ignored – even argued over. After all, how can anyone take half an hour to collect some milk and stamps when it’s only a few minutes walk to the shop.

“It’s not fair on you” says Arthur, “No it’s not. So what, so what!” responds his loving wife. Both so courageous and ready for the fight of their lives.

But, amidst the “sunny days” and “rainy days” Arthur wil gradually lose his ability to think and in the grin darkness of their hospital consultations, Jane confesses that it feels lilke her husband is slowly leaving her…

Jane becomes increasingly isolated by Arthur’s innocent forgetfulness and his panicked cruelty. Their life is only heading one way and yet, sparked by Frank’s powerful song Arthur can occasionally remember. For brief moments he is once again whole and Jane’s husband… it can’t last but for the instance, he has returned.

Jane’s reaction is difficult to watch and her's one of the purest expressions of despair I’ve ever seen in a theatre.

We all connect with Arthur and Jane: they are our parents, aunts and uncles, friends… maybe even us. What makes the play so powerful - so uncomfortably real - is the knowledge that all of us in the Hope’s intense close-quarters could find ourselves in the same boat…this is an everyday, everyone kind of disease.


We must hope we can bear the ending with good grace and find whatever comforts in the music we loved.

Paul Brotherston directs superbly and makes the most of the Hope’s intimacy. His two leads deliver powerfully well and if I say I was slightly more impressed with Celeste Dodwell’s range everything is evened out by the fact that Matthew Seager wrote it! Whilst the characters start out as emotional equals, over the course of fifty years, Dodwell’s Jane becomes the only one left to really express their collective agony; she does so remarkably well and you’d have to be made of stone not to feel it too.

In Other Words continues at the Hope until 18th March: I would strongly recommend it to anyone who wants to moved heart and head by their theatre. 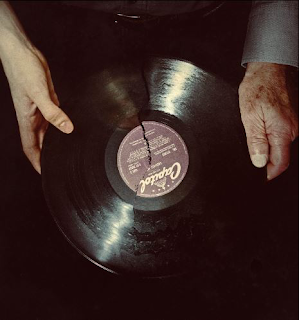 Posted by Ithankyou at 00:30 No comments: