What dreams may come… To be or not to be Scarlett O'Hara, Etcetera Theatre, Camden 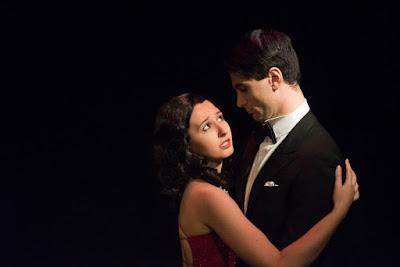 It’s highly possible that Laurence Olivier’s 1938 Christmas dinner was ruined by his host George Cukor revealing that Larry’s lover, Vivien Leigh had won the coveted part of Scarlett O’Hara. Gone with the Wind was perhaps the book of the thirties and, according to who you read, almost every leading actress in Hollywood had been up for the part.  Katherine Hepburn had been close but producer David O Selznick just couldn’t see Rhett pursuing her for ten years… but Vivien Leigh was a whole different matter: there was something about Vivien; something untamable.

Writer Simone Leonardi has done a splendid job of imagining the tensions between the young talents as they viewed cinematic as well as theatrical world-dominance. Vivien appears the stringer of the two characters in this counter-factual view with poor Larry suffering adverse reactions to his food possibly related to the shock of Scarlett: she taunts him as a “self-centred, half-faggot” married to a lesbian wife – none of which I can verify either way but it makes for the cattiest of fights.

Larry’s no dope though and he gives as good as he gets with less direct but equally devastating passive aggression: he has class and experience on his side, an actor not requiring direction who could act any role… “the words, the action resides in the words…” he declares reading through Rhett Butler’s lines.

He tells Vivien that he’s up for the role of Rhett even though he knows she doesn’t think he’s masculine enough or certainly as much as Mr Gable. Larry tries to drag Clark down to his level by concocting lines about how he had to turn tricks to replace his crooked teeth… un-sexing Clark Gable will take a lot more than desperate-dodgy dentistry Mr Olivier.

The two are in love, both unhappily married but they are also in competition; it’s the nature of their fame and whilst their minds can brilliantly analyse the meaning of lines, they struggle to communicate their basics.

It takes the arrival of George Cukor, the film’s original director before Victor Fleming took over, to bring the sparring into focus with a revelation that breaks your heart… Scarlett may well bring Vivien immortality but what will she have to sacrifice?

This incident – not telling! - may or may not be true but the two lovers successfully divorced their respective partners and went on to be married from 1940 to 1960, no doubt enjoying many such nights as this: daggers drawn in deep affection.

Playing an icon is no easy task but Sophia Eleni gives her all as a Vivien Leigh fighting for her professional her love life at the greatest moment of weakness/opportunity. Leigh had mental helath issues for most of her life but there’s an unique intelligence and uncanny spark that lifts her performances above most other mere mortal actors. Sophia gave it the full Vivien and her sparkle held the room rapt from beginning to end.

Larry was no slouch either and Federico Moro was well cast – he even looked like Olivier dimpled chin to boot! – and managed the great man’s slightly odd diction.

Tino Orsini carried all the gravitas of George Cukor as he rushed in to force the talent to make the right decision… in a hard-headed business such as this, it’s ironic that he ended up sacked in favour of Fleming.
Raffaele Cericola’s direction was spot on, making the most of the Etcetera’s space and his performers who interpreted Simone Leonardi’s smart script so well that the spirit of Scarlett hovered over the room…
The show runs until 30th April and deserves to be seen - but you better be quick! For reservations and more information, please contact info@nightexpresslive.co.uk or the Etcetera Theatre.

Email ThisBlogThis!Share to TwitterShare to FacebookShare to Pinterest
Labels: Etcetera Theatre, Federico Moro, Raffaele Cericola, Simone Leonardi, Sophia Eleni, Tino Orsini, To be or not to be Scarlett O'Hara 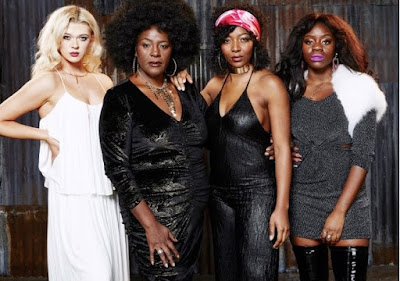 The old Times Square was still live and kicking when I first went to New York City in the mid-eighties, edgy and unsettling it made our Soho look tame. I remember seeing a timid-looking guy in a suit being hustled off down a west-side street "c'mon buddy you know it's what you want..." - what happened I'll never know. It was a fascinating, frightening place: anarchy in the USA... a world in which the only law is desire. A visit to this neighbourhood aroused conflicting response but if you had to live in it... well, that's something else.

Cy Coleman's musical is less well known than Sweet Charity and City of Angels (brilliantly revived at the Donmar Warehouse last year) but it packs a truer punch than either. His music and Ira Gasman's words pay tribute more to the actuality of this desperate place and even though time may have made The Life as much of a period piece as the noir Angels, there is no doubt that The Life continues to be lived and it's hard.

Coleman and Gasman wrote the final version with David Newman and the production was further refined by director Michael Blakemore, who, as Newman said, "steered the show along a tightrope, careful not to fall into the seediness below, toward a common humanity to which audiences can relate."

Twenty years after its Broadway debut the show has been revived with Mr Blakemore once again directing and it is among the most thrilling and immersive theatre I've seen. The Southwark's space is so intelligently used and as the cast enter and exit via stairways through the audience left and right, you feel completely wrapped up in this world.

The fifteen strong cast are, literally, in your face throughout and their voices, all powerfully stage strong connect like a heavyweight right hook... above and below the belt!

Sharon D. Clarke is the diva-in-chief as Sonja the old pro who has - almost - grown to old for her night job... her voice is so rich in texture she hardly needs the words to express her feelings. She has such stunning presence!

Cornell S. John is Memphis, the baddest of the pimps, who rules with an iron fist in a leather glove, so effortlessly cool and dominating the stage space with charismatic, soulful vocals. His performance is all the more powerful with the full weight of his character's darkness only hinted at before being ruthlessly deployed as Memphis comes looking for payment in full after a favour "sold", not lent.

T’Shan Williams is Queen, our heroine and a one who dreams of escape for her and lover Fleetwood (David Albury). Williams' vocals are sweet and strong with a sad tenderness skillfully expressing fragile hope under threat. She acts with an old soul beneath her youth and beauty: someone to watch out for.

Queen turns tricks for Fleetwood, a Vietnam veteran now wanna be pimp... She's saved her money and wants to escape but her man has wasted it on getting wasted. She's his only girl though and encouraged by hustler-come-MC Jojo (John Addison) he goes in search of another to add to his roster. They find Mary (Joanna Woodward) newly arrived at the bus terminal and aim to suck her into their world of co-dependent vice.

Yet, whilst she has just literally got off the bus, Mary is not quite the naive country hick they expected and soon she's moving from waiting tables to wowing punters at an adult bar. The only way is up and Fleetwood aims to follow. Queen sees little option but to deal with the Devil, in this case Memphis, which allows her to show up her old man at the Hookers' Ball. But everything comes at a price and Memphis is adept at balancing his books.

The prelude sets a fatalistic tone as the dancers explode on stage in distressed and distracting street-walker chic - this is the uniform of sexual defiance as much as availability: there's is a hard way and there's no glamour just weary, defiant display.

This Life moves at pace and is relatively light on dialogue with the songs expressing so much of the characters' stories, from the defiance of JoJo's Use What You Got to the proud fatalism of Sandra's The Oldest Profession and Memphis's sadly all-too-true My Way or the Highway.

There are some fantastic voices on show with the audience applauding each song with increasing intensity. This felt like a gig and yet the engagement on the faces around was as much with the story as the singers and the songs. We were all living The Life form start to finish.

The direction is as assuredly perfect as you'd expect from the OBE, AO and American Theatre Hall of Fame awarded Michael Blakemore and Tom Jackson Greaves' choreography uses every available inch leaving the audience in the front row stirred but not shaken.

Tamara Saringer directs a superb group of musicians or as we should call them a really tight band!

Not a drop of energy is left unspent in an endeavour infused with pure joy. See it you must as it's been away from stage for far too long and it deserves not only to move out of the shadows of Cy's classics but also into the West End.

This Life runs at the Southwark Playhouse until 29 April 2017 - don't miss it because 'Someday' is for Suckers! Tickets are available here but I think you'll need to be quick for this is surely the hottest show in London!

Posted by Ithankyou at 10:54 No comments: