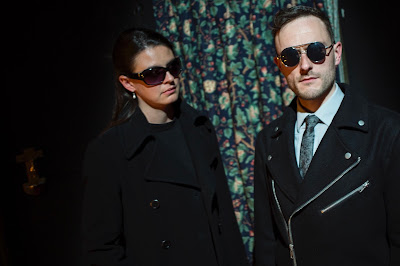 Posted by Ithankyou at 06:14 No comments: 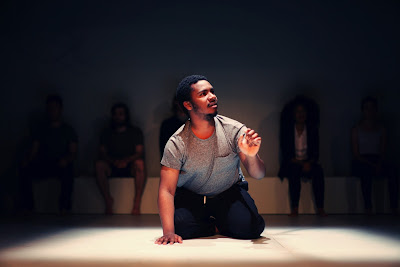 "When you no longer have time, you float…”

This is play that dares to examine the psychotic mind and which uses movement, space and puppetry to find sympathy for the devils that beset us all. Based on death penalty investigator Rene Denfeld’s award-winning novel, it makes for astonishing and absorbing theatre. With subject matter like this it would be easy to miss your footing; to over-compensate and tumble into melodrama and yet Joanna and Connie Treves’ adaptation walks the line with some style.

They use a rich mix of poetic verse and the almost child-like point of view of the central character, double killer Arden, to find the enchantments in high security death row: almost nobody will get out of here alive but there is a chance of redemption for even the most damaged soul.

At times the cast moves together like a gentle breeze, they draw stage marks on the floor or dates on a white board using the stage as an extension of inventive, engaging performance.

None of this would be possible without a remarkable and highly flexible cast none more so than Corey Montague-Sholay who plays our central character Arden, a killer with a soft heart who unfurls himself in the opening moments to talk of the enchantments of his prison. He won’t talk of his first kill and mentions his second but before we get to that he tells us of his mute response to life and how through learning to read his horizons have been expanded.

His favourite book is The White Dawn by James Huston and he reads it over and over, finding new words and meanings as if the author had added them between each reading. This repetition is important almost as if Arden could live his life again he would find more and more meaning and maybe follow a different path… meaning is more important than actions but actions mean more than words.

In the prison is The Lady (Jade Ogugua) who works with the inmates to establish more about their cases and their wishes for what time they have left. She takes a particular interest in one killer called York (Hunter Bishop) a man who has given up after a brutal life poisoned from the very start: he just wants an ending. But The Lady can’t accept that and tries to dig into his story going to see his Auntie Beth (Georgina Morton) in Sawbridge Falls, a small town where reputations spread fast and stick, its name saying as much… Beth describes York as being like sugar, sweet as a baby but soon hardened.

There is also a man, Troy (Liam Harkins) – one of many men – who was with his mother. He seems friendly enough, he even shows The Lady his homegrown crop, but there’s something he’s clearly not revealing through his words… The line between human and inhumane is very fine.

What is revealed is a life of abuse and degradation, poisoned from the very start: an inheritance of hopelessness with a foetus already infected with venereal disease born to a mother abused and abusing. But the play doesn’t preach and nor does it blame society it just tries to explain. There needs to be hope above all else and that can be found in the moments in which you surrender yourself to art.
There’s a fallen priest (Jack Staddon) working in the prison and he becomes close to The Lady. As their connection cautiously moves closer we discover how he lost faith and how he tried to help a young girl (Georgina Morton again) he met in a lap-dancing bar only for his own doubts to drive him away and leave her without her last chance. This life is brutal and those who don’t kill others are just as liable to remove themselves…

The Lady tries to build York a “castle”, a safe place in which he can speak his mind and make sense of who he is and not only how he came to be but whether he wants to continue.

As his own days fade away on death row, Arden’s imagination runs free as he talks of the electric horses set wild by each execution. The words are lyrical and one line refers to putting pen to paper “pressed as if my dreams were leaking out”. But when you have been violated – when you have no soul, the ideas in your mind become such terrible things…

Montague-Sholay is sensational and if he were a book you wouldn’t be able to put him down! He gives a performance of suppleness with tonal control as impressive as his physical expression. We’re left in doubt that he is a gentle, poetic soul but one who has done the worst possible things.

Jade Ogugua is also superb as she gradually reveals her own reasons for trying so hard to help these men: background and conditioning needn’t defeat life and her gently-nuanced performance sparkles with emotional intelligence throughout.

The whole cast give their all and are very well choreographed by Movement Director Emily Orme. The music of David McFarlane is also well crafted and I particularly liked the medicated trance for the dance club sequence: house music with the hope taken out!

The Enchanted runs until Saturday 17th June and tickets are available via the box office.

The Bunker is a fascinating venue, literally underneath the Menier Chocolate Factory, which means you can grab a bite to eat before descending into this magical world and be enchanted…