Monsieur Shakespeare’s holiday… Much Ado About Nothing, Antic Disposition at Gray’s Inn Hall 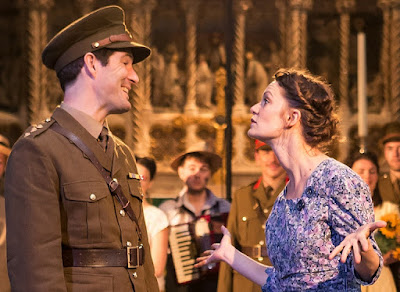 The Antic Disposition theatre company meld William Shakespeare with the physical comedy of Jacques Tati, place the action in rural France at the end of the second world war and then perform in cathedrals with an Anglo-French cast who also sing and dance… It’s a winning formula and you wonder why no one has done it before!

This marvellous, multi-tasked Much Ado was performed Gray’s Inn Hall, one of the few remaining original Shakespearean venues, where The Comedy of Errors was performed in 1594. 424 years later portraits of James II, Charles I and a bust of Winston Churchill looked down on the Hall transformed into a period French café, a bar at one end and tables and chairs laid out for the braver audience members as the performers ranged dangerously up and down and imaginary village square.

Directors Ben Horslen and John Riseboro saw the French comic-connection in the form of Dogberry, the play’s constable of the watch who has much in common with the officious, jobs-worth’s of Tati’s films and they also felt the physical comedy would help channel the original humour. This sounds brave, if not foolhardy in principle but the Bard can rest easily as they deftly weaved their way around the core text and re-energised what can be a slightly irritating storyline if not done well (sorry Bill!).

This was in no small part due to a truly vibrant cast who played their hearts out on another muggy evening in sunny London.

The play starts with the business of the café in the village of Messina as it’s clumsily-officious manager, Dogberry (Louis Bernard), “serves” the locals with the care-less help of his assistant… Mark them well for we will see them again later.

Then the real story begins as a troop of British soldiers is announced at the home of local dignitary Leonato (Chris Hespel). They are led by the victorious General Don Pedro (Theo Landey), an old friend, who has brought two of his officers, Claudio (Alexander Varey) and Benedick (Nicholas Osmond) along with his brother, Don John (Alfie Webster) who is, in all ways, a right bastard.
Claudio falls for Leonato’s daughter Hero (Floriane Anderson) as he must whilst his pal Benedick renews adversarial discourse with her cousin Beatrice (Chiraz Aich); the two relationships are almost the reverse and as one gets harder the other gets easier, giving the play an unusual but satisfying balance.

The two couples are played with conviction and you have to admire anyone who can convey Elizabethan meanings through complex verse but if you’re French it’s additionally impressive. Floriane Anderson positively glows as Hero, her dancer’s flow evident in the gracious poise with which she plays out her lines. Chiraz Aich is absolutely fierce as Beatrice spitting out venomous couplets at Benedick whilst in a blur of continuous motion; strutting with athletic menace and with a smile that can turn to sneer in an irritated instant.

On the English side, Nicholas Osmond gives as good as he gets as Benedick… he has a very British face, think Colin Firth meets Edward Fox (circa 1969) and yet can also play the clarinet.  Not to be outdone, Alexander Varey is upstanding, for the most part as Hero’s hero Claudio and also performs a most remarkable impression of Norman Wisdom/Lee Evans as Georges, one of the local lad’s army under command of Dogberry.

Throughout there’s songs which serve the double purpose of advancing the plot and punctuating the drama. The main players are accordionist with attitude Scott Brooks, who plays Verges and Molly Miles who plays violin, sings and also the maid-servant Margaret… who will stay loyal to her mistress and still be abused by the evil characters around her.

Talking of which, Alfie Webster is marvellously malevolent as the aforementioned dastardly brother who hatches a plot with the Tommy Burgess’ Borachio – a foul nave who I’m sure is world’s away from the actor (who can also play guitar and sing so he must be alright). Between them they plan to drive a wedge through this new alliance of affection and a knife through the innocent heart of Hero…

Will they succeed, and will the ultimate heartbreak engulf those who have already endured far too much? The clue’s in the title and neither William of this company leave us in any danger of sustained misery.

The play ends with a rousing singalong and dance, the company and audience smiling at an evening’s energies well spent. Thus something did come from Nothing and the grand old Hall almost dipped it's ancient arches in architectural appreciation.

Much Ado… continues at Gray’s Inn Hall until 1st September so you better be quick – tonight’s show was a sell out and rightly so. Tickets are availablefrom the Antic Disposition website.

Posted by Ithankyou at 11:28 No comments: