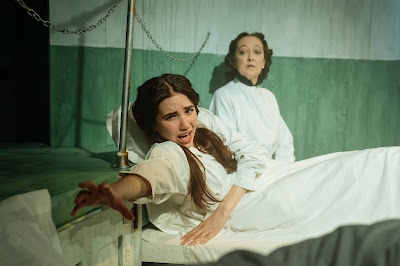 “What a doctor really wants is a cynical patient, someone who will question their pedigree…”

Theatre can transport you and it can educate and unsettle you and even in a Thursday afternoon matinee the story of ‘Dr’ Linda Hazzard and her kill or cure quackery was deeply disturbing thanks to four superb performances and the simple truth of it all.

This is a horror story and all the more so for it being based on actuality. Also, at a time when people can believe there’s no such thing as climate change or that Donald Trump is a proper president and that Brexit is the cure to all ills – starving ourselves of favourable business terms to set our country “free”… it’s instructive to watch an ignorant ideologue at work. Perhaps the disgraced Dr Andrew Wakefield is the best modern comparison for his incredibly damaging assertion that vaccinations cause autism; his work has been completely de-bunked and yet he’s still out there preaching and has single-handedly led to the re-emergence of measles.

Hazzard was an unqualified “doctor” noted for her extreme and unscientific fasting treatments at her "sanatorium", Wilderness Heights, in Olalla, Washington. Under her “care” some forty patients died and in 1912 she was finally convicted for the murder of a wealthy British woman, Claire Williamson, whose sister, Dora, narrowly escaped the same fate being just 60 pounds when she was rescued by a relative.
It’s an extraordinary story and Kate Barton’s play does it justice by focusing on the two sisters as well as the mindset of their “doctor”; what made Hazzard believe she was acting in anyone’s best interest? Did she simply want the cache of medical practice, was this Munchausen syndrome by proxy or was she just a psychopath and criminal – she was found to have forged Williamson's will and stolen most of her valuables; a common criminal.

Caroline Lawrie is superb as Hazzard, portraying her as a narcissist determined to prove everyone wrong and to inflict her ideas on the unsuspecting. She has the unbending passion of a cult leader and the force of personality to dominate victims seemingly for their own good or her gratification for, as the quote at the top reveals she relished a challenge and the chance to show her superior mind.

Into her orbit comes two wealthy English travellers, the Williamson sisters Dora (Natasha Cowley who I’d last seen in the excellent Anomaly at the Old Red Lion Theatre) and Claire (Jordon Stevens) who read Hazzard’s book of nonsense, Fasting for the Cure of Disease (1908). There’s good interaction between the two; bickering familiarities and sisterly sideswipes… they’re good fun, Dora the more worldly-wise and witty, with Claire the sweetly-earnest hypochondriac with her “tipped back uterus”.
They are soon under Hazzard’s spell though as she attacks their faith in medical Doctors: “how very typical of a man to recommend that kind of nonsense to a woman…” Her use of this proto-feminist line is not so much in support of the “free spirited”, corset free sister but just building herself up against the “fake news” of the established male, medical elite.

Soon she has the sisters drugged and separated, Dora subjected to repeated enemas and both starved of protean as they grow too weak to think, move and defend themselves. Luckily Hazzard has not gone unnoticed and a journalist, Horace Cayton Jnr (Daniel Norford) is on her case… but can he break through in time to save the women?

Dora lived to testify against Hazzard and the bad “Doctor” was jailed for her sisters and other deaths in 1912. She was released on parole in December 1915 and the following year Governor Ernest Lister incredibly gave her a full pardon. It is suggested in the play that her friendship with his wife had played a part and she was able to start again in New Zealand. Poetic justice finally caught up with Hazzard in 1938 when she died during a fast to cure herself… finally doomed by her idiotic ideas.
Kate Valentine’s direction brings out the full flavours of Barton’s script and she maximises the narrative tension as we go from quackery to murder. Cowley and Stevens are heart-wrenchingly convincing as the sisters incapacitated and slowly losing their minds as their life of forced out of them: it’s quite uncomfortable to watch their shift from vibrant youth and very impressive physical work from both.


Daniel Norford presents the heroic figure we need amongst this darkness and Caroline Lawrie not only makes us believe in her “Doctor” but also makes us doubt ourselves from time to time; surely the true mark of a sociopathic narcissist. Takes a real pro to go to the heart of darkness and still present a rounded human being who can, fleetingly, gain our sympathy…

IThankYou Rating **** Macabre and harrowing, Fast never lets its subjects down and is compelling theatre which leaves you wondering how many others have suffered in the name of people who just believe they know best.

Fast is a production of Digital Drama and has already enjoyed sell-out shows at the Brighton and Edinburgh Fringe as well as being shortlisted for Best New Play Award 2018 by New Writing South. One to catch!

Fast runs at the Park Theatre – a lovely venue just around the corner from Finsbury Park with two stages and great coffee – until 9th November and booking details are on the website.

Posted by Ithankyou at 02:21 No comments:

The Jokers… The House of Yes, Hope Theatre 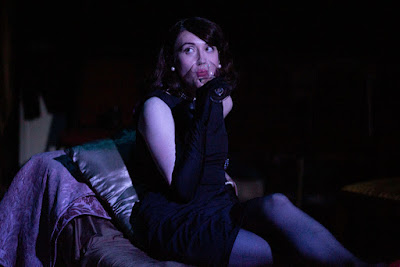 “A person gets their heart set on a certain thing…”

Funny, sexy, violent, frightening and unsettling, Matthew Parker’s last in-house production as Artistic Director for The Hope, had everything I love about his work. You grab a drink downstairs in the bar of this famous venue and walk upstairs into a performance area that even smells different from the world below. 85 minutes later you crack a twisted wistful smile as you walk out trying to process the many layers just unpeeled in front of your very eyes…

There’s a dark magic here and a team of performers who are utterly within their roles – there’s no room to hide as audience or performer with the players standing amongst us as once again, Mr Parker makes use of every inch of the Hope.

This being a last hurrah it was fitting that three stars from three of my favourite Parker performances feature strongly; Colette Eaton from Her Aching Heart, Fergus Leathem from Brimstone & Treacle and Bart Lambert from Thrill Me: the Leopold and Loeb Story.
Colette Eaton prowled the stage tonight with malicious confidence as Jackie-O, the twisted twin sister of Marty (Leathem) with a history of psychiatric disorders, medicated almost to the point of normal behaviour but still obsessed with the death of JFK. She makes me think of a certain character currently on screens played by Joaquin Phoenix, only her Jackie has more menace and less make-up. She owns the role with a smile and a laugh that Clown Prince of Crime would envy and has such assurance and control that her primal screams of rage all the more astonishing.

In the intimacy of the Hope you are tempted to reach out and comfort an actor in seeming distress, that’s how completely you are part of their world and I felt for the twin’s younger brother, Anthony, played by Bart Lambert as a sympathetic sociopath all of his own. This is indeed one strange family and Bart has such intense expressiveness and quivering febrility imbuing his character with fear and cunning: at once worn down by and revelling in the family house rules of "do as thy wilt shall be the whole of the law".

It’s Thanksgiving eve and there’s a hurricane blowing outside; the least pathetic fallacy ever – no one’s getting out of this House unchanged.
Mother knows best of course, and murderous matriarch Mother Pascal (Gill King, classy, imperious, Cruella DC...) is the wicked witch of Washington who dominates and enables the free-roaming morality of her children. Marty is the one trying to build an existence outside of her centrifugal cruelty and brings home his fiancée, Lesly (Kaya Bucholc, so energetically commited as the play's most identifiable character; experiencing The House through our eyes), a “civilian”, a working class girl from Pennsylvania who has no name just a lot of character especially when faced with the family’s desperate need to pull Marty back in. It's a change of pace for Fergus Leathem after Brimstone, and he plays the almost-straight man to his family's sick jokes with subtle confidence.

"I’ve never even met anyone who’s been to Pennsylvania, much less been from Pennsylvania, Pennsylvania is just this state that gets in your way when you have to go someplace else."

Like antibodies the Pascals work on Lesly’s alien force; Mother through aggression, Anthony by hitting on her and Jackie-O who uses the most powerful lure of all for her twin…

Wendy Macleod’s play resonates on so many levels right now as, thirty odd years after it was written, we have another family running the Whitehouse and who, like the Pascal’s want all of the Kennedy trappings without the political conscience. Jackie-O dresses up as Jackie Kennedy complete with fake blood and JFK brains on her dress; no more horrific than the way reality is turning out. Take notes Ivanka…
The entitled psychopathy is very 2019 as, from all around the world, might is increasingly right and Lesly, despite her spirit, is just another intelligent and reasonable person who is damaged by the Pascal fruits. But, hey, they may be a little “crazy”, but they’re the ones with the power.

The House of Yes is mad good fun with a hundred zingers in the text all delivered with deathly deadpan by Parker’s posse of perfect performers. It’s a fitting farewell for the remarkable Mr Parker – almost a “greatest hits” collection of the funny, peculiar and thought-provoking themes that run though his work like a bitter-sweet Blackpool through a stick of rock. Here’s to the next one but meanwhile DO NOT miss this black swansong.

A tip of the hat too Stage Manager, Laurel Marks who made the lighting and sound design work so well on the night - the sixth performer on stage so no pressure! As usual the Hope was transformed this time by Rachael Ryan's design along with Lucia Sanchez-Roldan's lighting design and Simon Arrowsmith's sound. An in-house team that obviously likes to say yes.
IThankYou rating: ***** “A Play for Today with some stunning swerves and quite simply one of the finest displays of acting and direction I’ve seen all year.”


The House of Yes runs until 26th October, full details on the Hope website.

“Now if you'll excuse me, I'm going to baste the turkey and hide the kitchen knives…”
Posted by Ithankyou at 02:24 No comments: