Love and loathing in Soho… The One, Soho Theatre 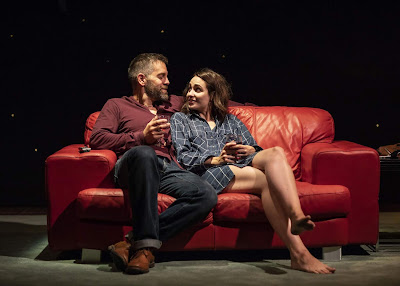 It was cracking the flags outside on Greek Street, but even with the Soho Theatre’s very effective aircon, this play was one to make the audience sweat. In the after-show Q&A the actors explained how the same moments that generate gasps from their audience sometimes produce laughter…  the narrative sits on an exhausting knife-edge of uncertainty.

The One is an exceptionally well written play in which the two main characters swap lines like Spencer Tracey and Katherine Hepburn in a very modern way – Kate never asking her man to “rape” her for a start. It’s a dom-rom-com with the dominance shifting from he to her and back again.

Harry and Jo are in a long-term relationship and we’re never clear who wants out and who is just clinging on; at various points it’s both or neither. John Hopkins is superb as the thirty-nine year old English Literature academic often at a loss for words in endless competition with Jo, pitch-perfect Tuppence Middleton, a former pupil of wicked tongue and fearless phrasing, ten years his junior. Both on the verge…

Jo’s sister is about to give birth and it’s going to be a long night. Jo checks her phone in a deadpan way warily enthused about her sister’s entry into the next stages of adulthood – pressure on or pressure off, she’s at the stage in life where she has to stick of twist. She appears detached from her partner as she watches TV and flicks Wotsits into her mouth to create some interest as he works away behind her making love on the couch.

I’m no expert but Wotsits are not the food of love and in the first of many dizzying about turns, they reveal a couple using humour, sex, violence and anything they can lay their hands on, to mask their biggest question: should they carry on.

As Jo’s sister waits for Baby Godot, her friend Kerry (Julia Sandiford) is also having the biggest of nights as she splits up with her partner, Bradley, and comes looking for help from Jo and Harry – also a close work colleague. There’s a lot unsaid between Kerry and Harry and Jo mocks her for suggesting that Bradley forced her into sex, when he knew she didn’t consent; even though as Jo says, Kerry made no mention and relied on the indications of body language.

Vicky Jones, co-creator of Fleabag, writes these moments so well and, naturally enough, some are based on personal experience and the fine lines between yes, no and grudging obligations.

Kerry’s febrile sensitivity makes Harry and Jo seem coolly mature and having pushed her back out into the night, they seem surer of themselves, but without the emotional triangulation provided by their distressed friend, they soon fall in on themselves.

The night passes on, the cast members moving the hands on a large clock and pouring litres of red wine off the side of the stage… This is a long-night of the soul and we are at no point certain of the outcome.

Jo tries to goad Harry into sexual violence and you feel he undoubtedly has the capacity – when he checks this is what she really wants you feel he means it… he can’t beat her for words, but he knows he can physically. This leaves the audience uncomfortable and adds an element of risk to Jo’s ceaseless challenges.

Kerry returns and really ups the ante… her honesty and vulnerability so at odds with the multi-layered bonded conflict between her friends yet she’s a catalyst for a deepening of their game of truth or dare.

Theirs is a universal struggle both to communicate and the evaluate. There are so many levels on which they are perfectly attuned yet so many more where they are not. Do you love the one you’re with or step outside for the one you can’t be sure even exists? It’s fear versus hope and the ticking time-bomb of the next big birthday… last chance or no chance?

Tuppence Middleton and John Hopkins truly convince with astonishing, fearless performances: we were glad of the Q&A to talk through our own issues … It was like watching two athletes warming down knowing they have to go again for the next round (this was the matinee); the measured intensity of people who work out most of the day and every day. 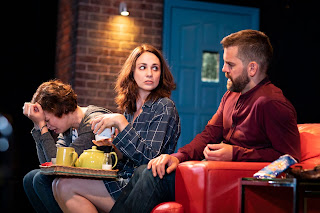 I should also mention that Mr Hopkins has a fine baritone as revealed in the karaoke as he sings The Music of the Night from Phantom… will the mask slip? Go see it and find out, if you dare!

Ithankyou Theatre Rating: **** This is a very intelligent, visceral play that reaches out to the audience. It will leave you questioning not only the ending but yourself… we’ve all been in relationships like this and some of us may very well still be…

The One runs at the Sogo Theatre until 25th August, tickets are available from the Box Office and online.

Posted by Ithankyou at 12:56 No comments: