All killer, no filler... Thrill Me: The Leopold & Loeb Story, Hope Theatre 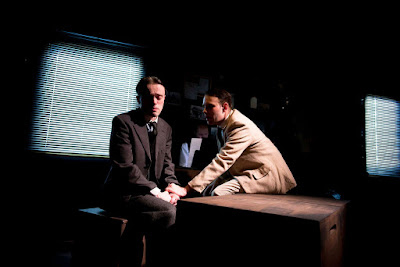 The upstairs room of The Hope and Anchor is always the extra character in every play I’ve seen, it’s like a sentient being in an Alan Moore fantasy, one that is haunted by the intentions of stage and lightning designers and the stories they tell. Tonight, the room was working overtime as artistic director Matthew Parker’s flair for movement and space brought out new and genuinely shocking dimensions as it always does.

Leopold and Loeb, the two “thrill-killers” suddenly feel the Police closing in and the nervy Leopold swings a torch around revealing a wall plastered with photographs and cuttings from the original murder in 1924. These are all linked together by red cord which criss-crosses the walls and the space above our heads; we’re in an incident room and a young boy has just been horribly murdered by two hyper-intelligent sociopaths.

The two men were saw themselves as Nietzschean supermen, whose superior intellects should allow them to rise above the laws of common men, they began to indulge in criminal exercises just for the hell of it and again, there’s a particularly visceral sequence in which they torch a warehouse and Loeb’s face is lit bright red as he revels in the transgressive destruction and sings, Nothing Like a Fire. There is also a powerful sexual connection between the men and their deeds with Loeb, always the master, making sex conditional on their escapades and passions run alarmingly high after each crime.

Parker doesn’t hold back and before you know it the audience is complicit in the relationship and the tragic attractions of this deadly pursuit, I’ve seen a lot of excellent shows at this venue and Thrill Me is surely one of the most intimately engaging: we’re dared to look into the hearts of men who committed the most appalling of acts, killers who Leopold later said were only human. This is a musical but of the most challenging and ultimately rewarding kind.

For all this to work, you need exceptional leading men and in Bart Lambert and Jack Reitman, Parker has found actors who not only look the part but have West-End power to their vocals as well as nuanced emotional control. As the dominant Richard Loeb, Reitman’s film-star looks are backed up by subtle reading of his character; yes, Loeb is the most overtly sociopathic and daring of the couple but he is also allowed chinks of vulnerability that show he needs his lover as much, perhaps, as he is needed.

Bart Lambert imbues Nathan Leopold with a febrile uncertainty, driven by an obsessive love for Richard and the constant cruelty pushed his way – Loeb calls him “Babe” but only sparingly as he knows he likes it… he undermines at every turn but perhaps he needs the lift?

Together they drive each other on as the two law students think of ever more thrilling ways to break the rules they have studied - both still aspiring to be lawyers "after".

Stephen Dolginoff’s musical was originally staged in 2003 and tells the story in flashback from Leopold’s parole hearing in 1958 with the narrative switching back and forth to key moments in the men’s relationship. The songs are strong and allow both voices to shine as they sing about subjects that by all rights should be too complex, Richard’s singing about luring their murder victim to his car in Roadster is quite the most disturbing song I’ve heard all year and yet it’s pitched just right; you feel terrible and yet there’s a glimpse of the motivation behind this horrific act.

Tim Shaw sits behind the keyboards, accompanying in fine style, at first noticeable and then fading into the background - in the best possible way - as the story takes hold. 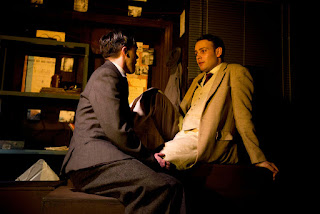 Chris McDonnell lighting design is exceptional as is Rachel Ryan's design and you get a sense of the team ethic of Mr Parker’s Hope which drives the theatre onwards with every new show. Thrill Me is a remarkable show and I if you’re looking for an adventure into the genuinely unexpected, take a walk on the wild side and book with confidence… you’ll still be feeling the show in the days that follow.

IthankyouTheatre rating: ***** For those who don’t believe that musical theatre can tackle complicated real-life stories this is unmissable; it’s an adventure into the lives and love of two killers that fearlessly asks “why?”

Thrill Me, plays at the Hope Theatre until 20th April, full details on the website.

Posted by Ithankyou at 10:11 No comments: 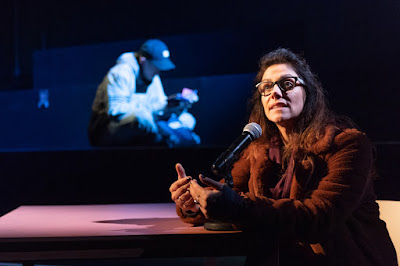 “Cause it’s all very well wanting to be a voice for the voiceless, eh. Until you find oot the voiceless have a fucking voice and mibbe they might want tay use it.”

My father was a novelist and had 23 novels published from the seventies to the eighties; he always told me to write about what I knew and for him, after work as a policeman from Wavertree in Liverpool, he had plenty to draw on. But at what point does a writer become like an actor, performing a role as much as any of their characters and, are these characters “self-determining” based on the conscious or unconscious sympathies of the person creating their narrative?

Playwright Kieran Hurley’s Mouthpiece literally features a playwright within a play and the stage design has a proscenium arch set diagonally across the playing area to make sure we’re all of us urging on the same compromises his made-up creator is facing. It’s a tricky one; how do you write about poverty without having experienced it? And, do you really have a duty to only write about what you can fully understand: are there any half-measure of compassion?

Hurley’s writer is Libby who is superbly played by Neve McIntosh, an actor I’ve followed since her quite remarkable turn as Fuchsia in BBC’s Gormenghast (2001). She has an unique presence and intensity and does not disappoint as the worn-out writer who ran out of things to say in her twenties and now, returned from London to live with her mother, drifts deeper into alcoholic self-pity, shorn of any real purpose.

She’s up in the crags outside Edinburgh and is trying, perhaps, to goad herself into jumping off the edge, self-slaughter one of her diminishing heroic options. Function is smothered in surmise just long enough for a young man in as shell-suit to pull her back from the brink. He is Declan – a frankly astonishing Lorn Macdonald – who has come to his favourite spot for some solitude and self-help, drawing away his many demons and escaping the hell of his home life.

There’s a cautious connection between the two as Libby admires one of his drawings, seeing things in it that Declan perhaps hadn’t intended… But this isn’t A Star is Born, this is real life or at least as far as “just fantasy” will allow.

Libby gets Declan to sign his picture and finds out about his sister, his mother and the monster of a man she clings onto, even at the expense of her family’s happiness. Measured against this is a writer’s block, a fall from the grace of the Groucho Club, and a mother who let’s her daughter stay under sufferance, the odd huff and puff, no actual violence.

Libby takes Declan to the modern art gallery and blows his mind and she introduces him to the post-grunge of Hole whose lead singer, Courtney Love, declared that when she felt at a loss as a front-woman, she imagined herself as REM's Michael Stipe. None of this means much to the youngster but he gets the drift and dances along in wildly different style to Libby who, like us all, is aghast at anyone not knowing who Stipe or Love are.

It's half time, and Libby breaks her (imaginary) fourth wall to remark, if characters are getting on well it tends to indicate a story arc that will end up with the opposite results. But who knows?

Soon, after Declan asks to be taken to the theatre, Libby starts to write again, she’s so inspired by her young friend’s story she wants to capture it or should that be capture him? She starts to quote verbatim and the lines are illuminated on the back wall to reinforce how much she is taking from Declan. After things take a turn for the worse at home when the 17-year old stands up to his step-father, Libby steps over the mark and has to write her subject out of her life. She is happy to resent his story but unwilling to really help him… is writing about a problem enough to absolve yourself of the need to help? 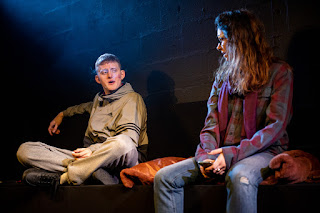 Hurley doesn’t fall into any obvious ruts in an edgy narrative that strikes true and is also very, very funny. There’s a great comic as well as dramatic relationship between the two leads, and they riff off each other as well as the script to deliver a genuinely funny take on the most serious of topics: that’s writing about what you know; human warmth and connection despite of background class and education. And this is what keeps your heart in your mouth when our friends begin to fall out and “success” puts a real strain on steadfast trust.

Director Orla O’Loughlin uses every inch of the sparse setting and pulls the performers out from that stage-on-the-stage literally into our faces: as Declan rages beside and as part of the audience, we feel the need to examine our own conscience and our own honesty of expression.

It's powerful, visceral indeed, and yet, even during the explosive finale, there is still humour, people lost and trying to control their fears…  I won’t give further details, just go and see it!

IthankYouTheatre Rating: ***** A standing ovation: this is a fast-paced, innovative play that isn’t afraid of making you laugh just as it challenges your perceptions. It also features two tremendous performances and the play’s incendiary anger stays with you long after you leave the theatre.

Mouthpiece runs at the Soho Theatre until 4th May - not to be missed!

Posted by Ithankyou at 04:33 No comments: