Hurting me more than you… The Cane, Royal Court 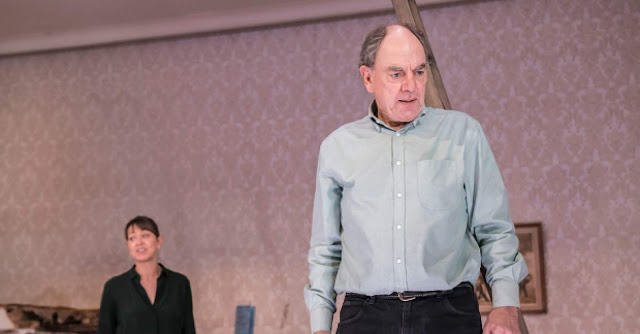 We’ve been together, me and him - 47 years – because we respect each other: little secrets, little lies. He has his. Fine. I have mine…

I won’t say that this play bought back happy memories of my junior school caning but it certainly made me think of Head Teacher Mr Pickup and the duty he had to perform on myself and Michael Caffery after we had been caught fighting. I was about ten and, as we had been pulled out from gym, the Head went lightly on us as we were in shorts… I remember humiliation and tears but, immediately we left his office, laughter as me and Mike both thought on how silly the school was. This was a badge of honour and it fed our nascent anti-establishment cool.

As a parent myself I’d have been very angry if my son had been hit and I’m sure I got off lightly in 1971. Corporal punishment seems so Victorian and so very “now” in the age of amygdala politics when the UK has decided to give itself a good caning.

But, of course, The Cane is not just about the abuse of pupils – punishment begins at home and whilst hundreds of school children are seemingly outside laying siege to the house of retiring deputy head Edward (Alun Armstrong) it’s the return of his long-estranged daughter Anna (Nicola Walker) that represents the real reckoning.

There’s an element of sixties theatre about Mark Ravenhill’s play, plenty of Becketesque stichomythia and a sparse design for a very smart set. Alan Armstrong – who simply never ages – would have cut his theatrical teeth at around that time as would Maggie Steed who plays his long-supporting/long-suffering wife Maureen. It’s a real privilege to see them both perform and alongside the amazing Ms Walker whose small-screen brilliance is rooted in incredible expressive nuance and technically-flawless diction: she could read the phone book and I’d still be enthralled by the time we got to the “z’s”.

The play is a puzzle with many humorous distractions along with narrative misdirection as the family tensions are triangulated around Edward’s record of corporal punishment as he prepares to end 45 years at “his school”. All three are teachers and Anna works in the business-focused academy sector which is anathema to her parents with its buzz-speak, pupil-focus and “eyes-front policy” that makes pupils look only at their teacher – a seeming panacea for underfunded and failing state education.

Anna is a public-private partnership storm-trooper sent to torment her parents as her father fights desperately to respond to his school being designated as failing. In reality, there’s little he can do, the status is all but inescapable and, in these brave austere times, only an academy re-boot could be sanctioned to “save” it. Edward can’t even use the right language in response to the sentence and it is here that his daughter offers to help. 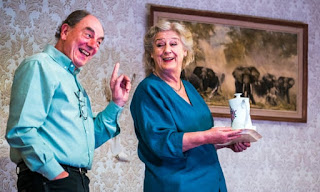 But, why now? The scenery reflects the secrets of the family, the scars they still carry and which must be revealed for them to move on. The marks left on the wall by Anna when she attacked her father with an axe are still there, accepted and denied all at the same time and – as life passed by no attempt was made to cover them up, they were just accepted.

Why did Anna attack her father and why has she become so estranged that her mother emptied her room and burned all of her belongings? Maureen also wants to burn the ledger of school canings that Edward took, along with the cane itself which he removed not wanting to complicate matters as personnel and policy changed.

Anna is shocked at this breach of best practice, she speaks, as her mother has it, in the modern style but there’s more here than a change of culture and a clash of generations. The real relations between the three are revealed and the truth edges forward in unsettling waves from the stage. 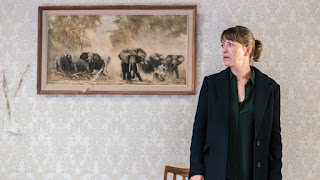 Anna has a card from her two children at first her father cannot think of a place to put it, but, as the real connections are revealed, her mother places it over one of the axe marks on the wall. There acceptance and the beginning of healing but also the potential for redemption for a woman trapped for too long as the, literal, supporter of her over-bearing husband.

The interplay between the three is engrossing and heart-breaking and you’re kept wondering throughout a script that treats modern sensibilities with enough respect to make the audience “look forward” throughout.  Outstanding direction from Vicky Featherstone and Chloe Lamford's stage design is a charcacter in its own right.

A classic Royal Court play which runs only until 26th January and there’s already limited availability so book now via their site. 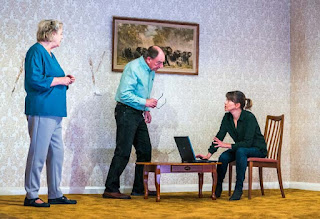 Posted by Ithankyou at 07:35 No comments: 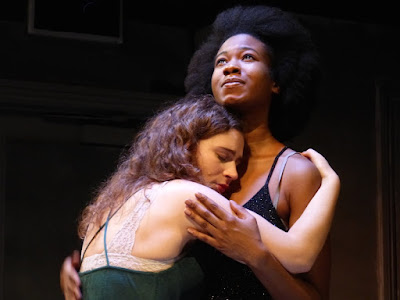 “Christmas is a right frightening bastard. If you can survive it in here then there’s hope.”

I grew up in north Merseyside where one of the biggest local employers was Park Lane, later Ashworth, secure mental hospital. I knew a lot of people whose parents worked there and we were constantly reminded of the place by the sound of the Monday morning alarm test, such a haunting sound which always sounded alien and unsettling.

Ashworth became notorious after it emerged that an atmosphere of sexualised bullying and intimidation was rife and it was one of the institutions that inspired Pru Stevenson to co-found WISH, a voice for women’s mental health in the criminal justice system. Pru worked at HMP Holloway when she became aware of the high numbers of women nearing the end of their prison sentence who were referred to special hospitals like Ashworth. Women were transferred for a variety of reasons and they endured years of additional incarceration beyond their original sentence… once you were in the system it was very difficult to get released.

Treated more harshly than the men, highly medicalised and brutalised, these women were victims of scarcely acknowledged injustice. Sarah Daniels contacted WISH when she was writing this play in 1992 and worked with Pru to create this uncompromising and deeply affecting work.

This production, directed so ably by Will Maynard, gives us nine characters played by three outstanding actresses, who show how malleable the fourth wall can be when, completely in character they move around the fullness of the Hope’s performance area playing straight to the audience and interacting – always a danger – with the audience. I had a brief conversation with Dee (Amy McAllister) about Dublin as she sat on the side-lines of the hospital’s Christmas disco, out of her depth and genuinely frightened by the evening ahead.

This is what I love about the Hope, you’re really involved in the play and you can see the performance in the visceral and – yes – immersive way. Human instinct over-rides imagination and, like me, you react to Dee and not Amy which says so much about the actor’s skill and commitment in this enthralling, beautiful and brutal play.

Beauty might be an odd word to associate with a play about social injustice, chemical as well as physical imprisonment and physical abuse but there’s dark humour and much satisfaction to be had in the genuine connection with a message communicated with such sincerity.

Dee is one of three women in Penwell Special Hospital, a secure mental institution who have previously been transferred from prison for various offenses. She’s not neuro or socially typical and has paid the price for being poor, abused and disadvantaged. She has hopes for parole but can she hold it together in an environment almost designed to undermine mind and body.

Fellow long-termer, Claudia (Evlyne Oyedokun) has spent seven years inside based purely on her inability to surrender after being originally incarcerated for a relatively minor offence and then sectioned for attacking the social worker who had come to tell her that her children would have to remain in care a while longer. Now she has had to give them up for adoption as she lives on alone.

The there is Ruth (Emily Tucker) the most disturbed of the three and the one with the fullest backstory; a victim of horrendous abuse who was jailed for attacking her step-mother. She is constantly at the mercy of her medication and is clearly in intelligent as well as highly-damaged individual in need of some real treatment…

Keeping order are Nurse Jackie (Amy too), a well-meaning northern lass who has yet to be fully corrupted by the system and Sister Barbara (Emily), highly competent and in control yet also the victim of her husband’s physical anger: does abuse cause the conditions and inform the nature of its containment? There’s also a new nurse, Sharon (Evlyne) who is learning the ropes and gives the audience someone to identify with as we’re as horrified as she is with each new discovery.

Things unravel around the hospital’s Christmas disco as Dee – aiming for parole - attempts to “prove” her hetero-normative “sanity” by dressing up and chatting to the male patients and having to listen to a man relishing his talks of rape. Dee also talks to her guardian angel (Evlyne) as she is punished with an increase in medication and it is genuinely distressing to see her character literally unable to think straight, lolled in a wheel chair, all vitality knocked out of her by the bluntest of chemical coshes.

Claudia, as is the norm, is wrongfully sent to solitary and later discovers her case notes; a series of exaggerated reports, motivated by her race more than mental health, that show Sharon for the compromised character she is. Then Ruth also receives a shocking visit from her mother-in-law Helen (Emily) as her truth and potential salvation or doom is gradually revealed.

By the end you’re rooting for all the characters and even the staff who are almost as much the victims. It’s a stunning play with so much intelligent writing all brought to life by these 3x3 performances.

A tip of the hat to Keri Chaser whose sound design set the tone and sucker punched me with judicious use of Kate Bush… there may have been something in my eye.

There are no longer women at Ashworth or Broadmoor… and one hopes that things have improved elsewhere but, somehow, I doubt it.

Further details of WISH as well as the charity, Women in Prison, which provides support for women affected by the justice system can be found on their websites. To, broadly paraphrase Foucault, we get the prisons we deserve as a society but not the prisons we need as individuals… maybe one day a change will come.

Until that time, plays like this are so vital for telling those on the outside what “life” can really mean…

Head-Rot Holiday plays at the Hope until 22nd December so get your act together and book tickets now from the website or thevenue. 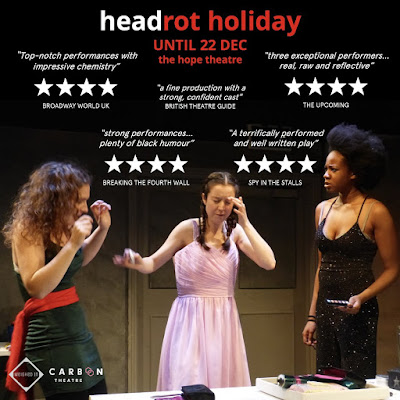 Posted by Ithankyou at 05:45 No comments: