The way we were... Cherie – My Struggle, Hen & Chickens Theatre 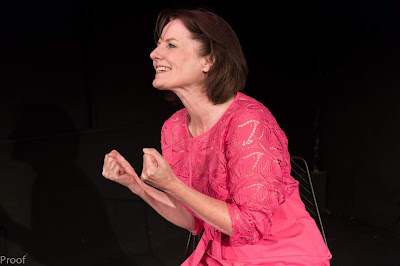 “People ask me if the play is a hatchet-job. And it is, but with Cherie wielding the hatchet.  A QC who specialises in libel law came to see a preview of the show just in case anything in it might upset Cherie. He said the only thing that would upset her is that she wasn’t invited.” Lloyd Evans

I met Cherie Blair on two occasions at the Legal Aid Lawyer of the Year Awards in the mid-2000s when she and Tony were on the final stretch of their amazing decade of power. She was charming, charismatic and much respected by the legal audience despite their questions about Guantanamo Bay… here was a top-class professional who just happened to be married to a Prime Minister and one who had taken his country to war on the most dubious of pretexts.

As Cherie – expertly played by Mary Ryder – explains, the war was supported by both main parties and in the ensuing Labour landslide of 2005, the party got 400 seats and over 19 million people voted for parties that had supported the Iraq War. In the demographic wilderness of post-Referendum Britain that’s a huge mandate… 19 million, well, that’s a lot more than 17.4 million isn’t it.

Were things simpler in 2003? They were certainly different and Lloyd Evans play does an excellent job of giving us the authentic voice of a woman right at the centre of the New Labour project; possibly the most “targeted” spouse in British political history?

Mary Ryder is superb as Cherie and sensibly avoids impersonating her subject whilst providing us with a realistic reading of her life in power and, indeed before. Cherie is the daughter of Liverpudlian actor Tony Booth and in the play her relationship is described as distant as he leaves her and her sister with their mother whilst off in London working, looking for work or, as she discovers, “crumpeting”. Booth was a serial crumpeteer and was married four times with his Liverpool family only finding out about his new child – their half-sister – via an announcement he put in the Crosby Gazette.

Cherie was a high-achiever from an early age and wonders if this was down to her desire to impress her father or, more likely, her own will to win. Gaining a law degree from the LSE she quickly progressed to Barrister and was a QC in her thirties. She met Tony Blair in her early days in Chambers and they resolved to pursue a legal and political career – both standing for Labour in the early 80s with Tony eventually getting elected leaving Cherie to continue her rise in the law.

The play raises the question of whether we got the right one as MP and then PM… who knows but Cherie was certainly the better barrister but, as she says: “victory turns you into the person the voters want you to be” and has there ever been a better channeller of public mood than Tony Blair?

There’s lots of fact and corrections in the play – of course Cherie curtseyed to the Queen she was a Queen’s Counsel after all! - and many funny digs at the likes of Alistair Campbell and Diane Abbott – “who was the first black woman MP, she may have mentioned it to you…” Jeremy Corbyn is also there – good to see in his constituency – with Cherie pointing out that he was right about the banks… and leaving gaps for us to fill in the rest of her likely opinion.

Cherie was “gut Labour”, brought up into the faith in ultimately humble circumstances, her Dad of galivanting and her Mum working nights at the chippy to make ends meet, but Tony chose Labour from a middle-class background. Neil Kinnock was also gut Labour and we know where Jeremy came from…

Gordon Brown missed his chance to line himself up as leader in waiting by refusing to stand after Kinnock resigned and the tragedy of John’s Smith’s early death left Blair no option but to go for the top spot himself: he could no longer trust Brown to lead. 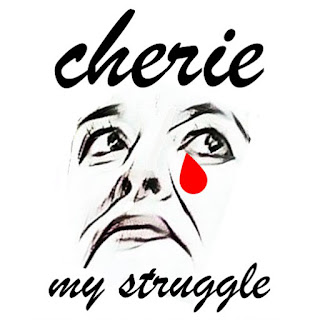 It’s a fascinating perspective on a time that feels longer ago than it should be, an era when the tabloid press was more powerful than even now, pointing their cameras at the new “first lady” only to pick holes in her appearance and her choices… We get the press we deserve and the politicians we vote for; Cameron channelled much as Blair did and now… now we’re in a frenzy of self-loathing.

15 years ago the talk of the Tabs was Carol Caplin, Cherie’s personal fitness trainer and style guru… a simpler time but one in which the bitterness began and after the financial crash on Brown’s watch, never stopped.

IThankYou Rating: **** A wow at Edinburgh, Cherie now comes “home” to Islington, the perfect time for reminders and regrets and a superbly energised performance from Mary Ryder. Cherie… we thought we knew you; we understand you that little bit better now!

Cherie  plays at the Hen and Chickens Theatre until Saturday 14th September 2019 – please grab a ticketwhile you can and Mr Corbyn, you can walk there from your allotment!

There's also a website for Cherie - My Struggle with more details; Alistair's probably scouring it as we speak...

Posted by Ithankyou at 00:56 No comments: 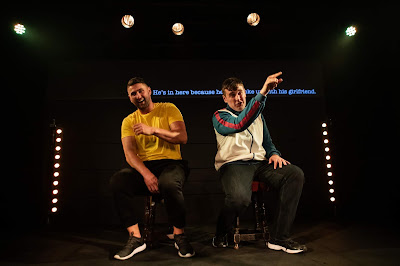 As a child in Liverpool I once witnessed an Orange march, not as big as these things go across the water, but still my first exposure to the religious divide in England’s biggest catholic city. We had different schools and, in my time, hardly mixed as boys.  That’s pretty much all I’ve got by way of understanding day-to-day life in Ulster with any catholic relatives I have living in Dublin, a city that, from my brief experience, has something of the same spirit as my hometown.

Alice Malseed’s play is therefore a challenge to my English view of Belfast, ingrained assumptions about the life there and the lazy thoughts that are currently being exposed about any ideas of a level playing field… Like the central characters Sas (Brendan Quinn) and Monty (Barry Calvert) I grew up slowly, happily clinging on to the childish fantasy worlds of DC and Marvel comics with my mate Phil until we both realised the game was literally up and we evolved into men in suits. There’s no such prospect for Sas and Monty and they’re morally and mentally arrested by their environment; potential smothered by circumstance.

The play begins with much humour as the two lads crack in-jokes, bantering in accents so broad that subtitles are projected on the wall behind – whether or not this was their intended function, I could make out most of what was being said, it had the effect of making the lads seem more constrained by the larger environment. Like Rosencrantz and Guildenstern, the Sas and Monty are destined to play out their lives like so much predictive text and this realisation is as horrific to the audience as the characters themselves.

We were kings when we were young says Sas at one point, reflecting on the invulnerability of childhood when they’d race around on bikes, or, in later youth, scam drinks from the local working men’s’ club. They sit in their local bar calling out all the characters around them, the reasons why they’re in their drinking, the damage that has been done… but it’s familiar, re-assuring.

The action is set in a boxing ring, not just because the boys both used to box but because they still play The Game, imagining themselves in shared fantasies whether they’re in Cuba fighting the revolution, involved in daring raids or even flying over their home as seagulls. Yet cracks are starting to show and Sas is finding it harder to leave reality pointing out that seagulls can’t fly so high, Monty’s face dropping in child-like disappointment.

They also role-play past events including an evening involving a local girl called Katie… there’s something here that disturbs both with Sas saddened and Monty in denial; he looks the tougher of the two and yet there’s something he’s not able to face. Here in their imaginary boxing ring they are finally, painfully going to confront each other and their issues.

Since the Good Friday Agreement, more lives have been lost to suicide in Northern Ireland than during the Troubles and around a third of people live on or below the bread line. Jade City highlights exactly how alone these men are with little chance of finding the support they need or a decent job. Working in shops, bars and supermarkets is difficult for them both to hold down and the Job Seekers Allowance is there to reward those with rich imaginations and patience who are willing to delude themselves that this is all there could be: and who can blame them.

One of them can begin the process of breaking free but it’s almost too cruel on the one that can’t as they are all each other has. Jade City is one of their local take-aways and much like the Emerald City, it can’t save you unless you save yourself, if, that is, you are able. Social services, mental health, and well-intentioned governments… much like the Wizard, are almost entirely fictional.

I loved the dialect and the text projection: Sas and Monty aren’t dead, at least not yet. Props too director Katherine Nesbitt for creating a very visceral play that pulls no punches literally or figuratively; so well written by Alice Malseed, we don’t see what’s coming, lost in the boys’ game until the very last.

IThankYou Theatre rating: **** A terrific two-hander that creates a rich world in which many of us would be crushed; a play that will stay in my thoughts for some time.

Jade City plays at The Bunker until Saturday 21st September – tickets available at the box office and online here. 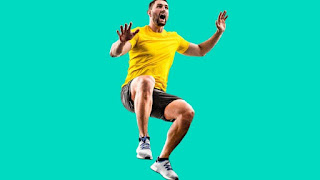 Posted by Ithankyou at 01:21 No comments: