Justice through knowledge - Different from the Others, White Bear Theatre 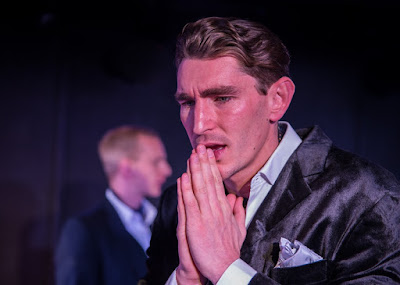 “Love for one of the same sex is no less pure or noble than for one of the opposite… Those that say otherwise come only from ignorance and bigotry.” Dr Magnus Hirschfield

I’ve just spent the most entertaining evening with Connie Veidt, Anita Berber and Reinhold Shunzel… it was a riot as you’d expect from these Weimar legends – Connie was divine, Anita so intense and Reinhold? Well, you know Reinhold… It was quite the party and yet there was a quiet but determined doctor in the room who really caught my attention.

After the Great War, Weimar Germany abandoned censorship allowing unprecedented freedom for artistic expression at a time when a new openness sprang across parts of Europe with, as playwright Claudio Macor says in his notes, love between men briefly being openly acceptable in Moscow and St Petersburg. Yet, even as the cabaret began in Berlin, Paragraph 175 of the German Criminal Code still made homosexuality illegal and contributed to the loss and wreckage of so many innocent lives. Shockingly it wasn't repealed until 1994 (after decades of amendments) which shows, if nothing else, how incredibly advanced the film was and also how brave.

This is a remarkable film and one that survives only in partial form: that it exist at all given what was to come is all the more extraordinary… which is precisely where Mr Macor comes in with this passionate and smartly constructed play about the making of and sentiment behind Anders als die Andern.

The play is dedicated to Dr Magnus Hirschfield and pays due respect to this extraordinary figure who is so well played by Jeremy Booth who presents him as both wise and driven. Hirschfield was particularly affected by the suicide of a young soldier he was treating in 1896, here represented by a figure called Klaus (Simon Stallard), who cannot reconcile his desires with the pressure from society, carrying a shame of "that which nearly strangled my heart". Klaus and the Doctor are almost lovers and the death drives the Doctor to fund a film to help prevent further needless selbstmord.

There’s so much detail in the play and yet Macor’s script – and Jenny Eastop’s pacey and precise direction - moves the narrative forward with rounded characters all reflecting the legends of the remarkable film makers. Richard Oswald (Christopher Sherwood) is determined to make an entertainment as well as education – as a confrontation with Hirschfield makes clear - and there’s so much respect in the play for his achievement.

The play also delights in introducing the stars who silent film watchers will feel they know well yet these were formative times for the three future stars of film and they were only just starting the transition from the stage.

The notorious Anita Berber (Beth Eyre), who perfected the cross-dressed style while Marlene was still at school and wrote a book, Dances of Vice, Horror, & Ecstasy, is addicted to cocaine and Conrad Veidt (Jordan Alexander). Unfortunately for her, Connie is married and can no longer play away… Jordan has the toughest gig in playing Veidt – he has the looks but is surely way too healthy! He does very well in replicating Veidt’s crucial scene in the film, which I won’t detail… you must see it! Benjamin Garrison’s Reinhold Shunzel is suitably outrageous, dragged up and drugged up, tempting Anita with a cocktail of chloroform and ether mixed in a bowl with rose petals… do not try this at home kids! These are all people you would love to party with and I doubt they’re lilies gilded in even the slightest way!

Kurt Giese (Simon Stallard) is a version of original star Kurt Sivers who played the young violinist who takes up lessons with Veidt’s character before the two fall in love. In the play Kurt falls for the Doctor and is an extension of his true passion that ultimately has to be denied: does he love the character played by Kurt of the actor himself and does the actor love the writer or the man?

Dr Hirschfield is able to place his responsibilities to educate above his own happiness subjugating his desires in service to the greater good and whilst the play diverges from the actuality as it progresses, it does so in the cause of illuminating the central themes. The Doctor is almost possessed with modern sensibilities but that’s all the better to counterpoint the sexual crisis of the time and, for much of recent history.

Hirschfeld played himself in the film as he tried to explain sexuality as natural and no reason for approbation: “… he is not to blame for his orientation. It is not wrong, nor should it be a crime…” Unfortunately, after a year of screenings Europe-wide, censorship was re-introduced and things were only to get harder as Germany drifted towards tragedy; first the books and films were burned and people were to follow.

Macor’s play works, much as the film, by informing and entertaining; as with his earlier biography of William Haines he is adept at bringing characters to life and very strong on the romance and steadfast friendships which enable truth to survive in the face of oppressive ignorance. As Hirschfeld said: “You have to keep living; live to change the prejudices... …restore the honour of this man… and all those who came before him, and all those to come after him. Justice through knowledge!”

Different from the Others plays at the White Bear until 16th November and I would heartily recommend it to all, you don't need to know the film to understand the eternal truths on show: get those tickets while they’re hot.

IThankYou Theatre rating: **** An astonishing story told with fierce sincerity and economy with a super cast who succeed in convincing as film stars and as elements of the most human of stories.. Go see it and wonder how brave this film was in 1919 and, indeed, why its story remains so vital a century later. 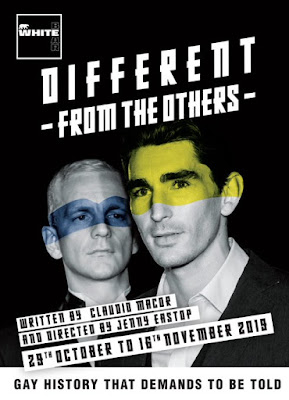 All photos by Andreas Lambis
Posted by Ithankyou at 08:45