Talkies or walkies… The Delights of Dogs/Lullabies for the Lost, Old Red Lion Theatre 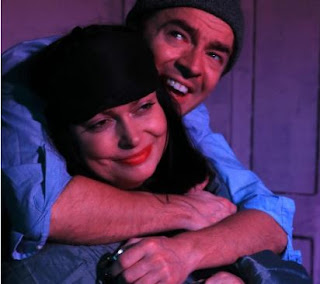 “There is violence and cruelty and bigotry and plain old crushing boredom but there is also nature and animals and art and sport, beauty and Virgil van Dijk!”

Rosalind Blessed’s two plays are packed full of sharp emotional relief, violent turns and bitter love turned shallow but nothing prepared me for the out of context mention of Liverpool FC’s greatest defender in thirty years. Van Dijk does indeed exemplify the best of the beautiful game and may well be a favourite of the playwright’s mother Hildegard Neil who makes a recorded yet highly impressive appearance in the first of tonight’s plays.

Two plays over something close to three hours is a lot to take in and for Rosalind along with Duncan Wilkins, a huge emotional undertaking, especially during the two-handed second play, The Delights of Dogs and the Problems of People, which involved a sequence of monologues and audience interactions, culminating in some of the rawest emotional displays you’ll see in any London theatre this winter.

Rosalind combines fierce charm with delicate emotional control and is a joy to watch in those soliloquies as she looks to audience, including us in imagined exchanges and even accusations; I was pointed at and called a pervert at one point and that’s the first time this year! Duncan Wilkins also has this playful confidence and plays off one audience member, “Steve” as his character – Ash - attempts to convince his soon to be ex-wife, Robin (Rosalind) that he has “mates” ready to help him recover from the dual blows of separation and pet-death.

“He might love me sure, but he certainly hates me…”

Dogs are a running theme across both plays – I hesitate to say “walking” – and exemplify the unconditional, pure and simple love that is seemingly beyond the most sentient of species. These characters are struggling to love themselves let alone their partners and relationships turn rancid in complex ways that we barely understand and yet which are clear enough if we would only look. The couple’s dog in Lullabies vomits in the back of their car and by the time they stop his bile has drenched their clothes much in the same way their relationship ends up soaking through their flat and their lives.

Food is also a common theme and in Lullabies Ash, prepares a meal for Robin as a peace offering whilst he recalls killing a fledgling crow by over-feeding it. The similarities between his lover and the stray animals Ash has always been attracted to are clear even to him but he can’t seem to think his way past it as she can. “No man is ever interested in what is on the inside…” exclaims Robin at one point before twinkling the briefest of apologies to half the audience before doubling down on what is an almost undeniable fact. Lads: we have work to do.

The direction of Zoe Ford Burnett – who is associate director of the Lehman Trilogy – is emphatic and clear, using the confined playing area almost as punctuation between the action.

The narrative is spread across a further six actors in the first play, Lullabies for the Lost, which sees a group in long-term therapy for eating disorders. Each gets to relate their story in a group session that will see them either come to terms and leave or extend their stay in an institution which seems as much a representation of their inner turmoil as a cure. Or rather, and not knowing Rosalind’s background in this area, it seems they need to choose to be cured, it’s not something that can be imposed on them.

We start off with the very engaging and all too relatable character of Larry (Chris Porter) as he struggles with himself over whether to go through with an invite he has accepted to meet with friends for dinner. If he leaves within five minutes he’ll be on time but he has a thousand worries – who will he sit next to, who he likes, who even likes him… he racked with doubt and worried his fragile recovery will be ruined by the evening.

Soon he finds himself in a room full of others and only gradually do we realise the connections between himself, the “Brothers Grim” – Jez (Nick Mulvey) and Tim (Liam Mulvey) – two men who just can’t connect beyond the surface, Sarah (Helen Bang), a neurotic who is too frightened even to tackle the mice in her flat and Nerys (Kate Tydman), a more confident woman who cannot let anything go after having her heart broken once too often.“I began to see the value in everything… I think things should have a value…” including, no doubt herself and the relationships that disappoint.

It’s like an emotional escape room in which the clues are obscured mostly by our own fears. Only scouser Andy (Chris Pybus) is able to come to terms with himself through the aid of a rescue dog called Millie who gave him a reason to get up and frame his active life around this most willing of partners. Before the Staffie came into his life, he was all but destroyed by his ex-, a “knock-off Kate Bush”; “the flesh is weak and the spirit envies the flesh’s strength…” and he wasted his life on corrosive social media, box sets and the illusory security of the bed.

Andy is able to leave but when anorexic James (Duncan Wilkins again) takes centre stage, the situation is put most eloquently as a trap of their own making: there comes a point when not everyone wants to escape. It is then that “Mother” appears projected onto the plain whiteness of the scenery, extoling the value of love and, indeed, Virgil Van Dyke.

Director Caroline Devlin moved the players around very effectively and the play is devastating, funny and so bravely personal from Rosalind.

The two plays alternate at the Old Red Lion until the end of January – they are very well written and exceptionally well performed; a grand – honest – start to 2020!

IThankYou Theatre Rating: **** The year gets off to a flying start with complex and raw emotion delivered with so much humour and brutal charm.

Email ThisBlogThis!Share to TwitterShare to FacebookShare to Pinterest
Labels: Duncan Wilkins, Hildegard Neil, Lullabies for the Lost, Old Red Lion Theatre, Rosalind Blessed, The Delights of Dogs and the Problems of People