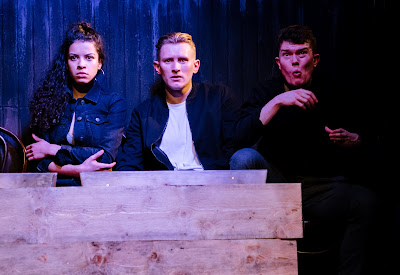 First performed in 1975, Stephen Berkoff’s East is described by its author as "a revolt against the sloth of my youth…” and “…a desire to turn a welter of undirected passion… into a positive form.” It is a fierce construction that even now knocks the audience onto the back foot not just with the force of its words but with the response required from the performers.

“The acting has to be loose and smacking of danger… it must be smart and whip out like a fairy’s wicked lash…” and tonight the exceptional cast, two making their theatrical debuts, let rip in style – in our faces, catching the unwary off guard in the close-quarters of the King’s Heads performance area. Nowhere to hide.

It might be too much for some, but if you can’t handle confrontation, don’t come to the theatre expecting to switch off and, yes, I mean you, the woman in the woolly hat who was outraged by something or other; I’m sure Mr Berkoff would be smiling over his 9d pint of ale over your ruffled sensibilities. She was a lone voice and the audience sat rapt and immersed in this brutal, blood-pumped performance letting rip with cathartic bursts of laughter and adrenalized cheers at the end.

Berkoff is describing a working-class culture that can still be found, one that rails against immigration and, as it grows older, mourns the passing of youth. Dad (Russell Barnett) regales his family with tales of marching with Oswald Mosely’s black shirts, and smashes the beans on toast around the table as he describes their ambush at Cable Street. We’re left to make our own judgement but there’s always a why that comes first.

Dad’s a busted flush, rotting in bitter middle-age, despising  his wife (Debra Penny) who takes solace in Z-Cars, Hawaii 5-0 and the pools… what else has she left with son fully grown and her future now far behind her.

Her son Mike (James Craze) is the next generation, he still has all to play for and yet he doesn’t really know what to do with the power of his youth. He is full of boundless energies and yet the very possibilities seem to overwhelm him.

His friend Les, (Jack Condon) is an edgier, less focused presence violently agitated at most times and uncertain of himself. He sees a girl on the bus and is so overcome with her beauty he can do nothing… he just doesn’t consider himself worthy enough to even try to engage. He follows her as far as he can but simply lets her go as she alights at Mount Pleasance, ogled by all the postal workers as she heads off out of his possibilities.

Mike is the more successful with women and his bird in the hand, Sylv (Boadicea Ricketts – quite astonishing in her professional debut), is smarter than her partner and those around her; ready to commit while Mike still wants to reassurance of “the pull” … it’s no comment on her, just the only validation he can think of on a Friday night.

The play is directed by Jessica Lazar who uses every inch of the limited stage area to push her players through exhaustive choreography as they fight, mime silent movies, turn into motorbikes (you have to see how Condon and Craze combine for that sequence!) and dance (and you also must see the Boadicea Boogie!). It is so visually and emotionally inventive and you get the feeling that the cast have contributed so much content allied to their performance commitment.

Everyone is excellent, but the two youngsters are so impressive you wouldn’t believe this was their debut and I would expect we’ll see a whole lot more from Jack and Boadicea. Jack Condon gives an adrenalized, eyes popped performance worthy of Berkoff himself; a convulsive febrile presence in fear of his environment and struggling to think beneath the urge to fight or submission. Dad calls him a fag and he tries to joke “I don’t know what you mean…” only to be met with the aggressive blank face of the dominant male.

Boadicea Ricketts is smoothly in complete command of her brief and is a high-sparking emotion-engine as the woman trying to accommodate these passionately-conflicted males. There’s a deceptive ease to her transitions and she is utterly transfixing in key moments and those were indeed real tears we saw as the play reached its conclusion. And yes, her smile can stun you from ten paces.

All the cast are superb but these two, these two… watch out for them. As the play has it: “now you know our names…”

East plays at the King’s Head until Saturday 3rd February and whilst it’s only a slight diversion from Stepney, the heart of the East End beats ferociously inside.

IThankYou Theatre Rating: ***** Socks blown off.
Posted by Ithankyou at 05:09