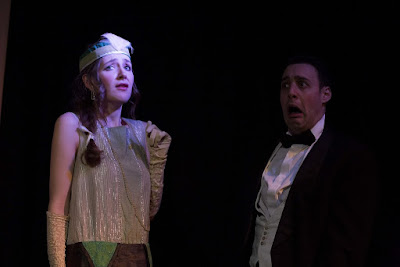 The Twenties, the decade when we started our liberation through a vibrant mix of our own music, dance and style: a movement to joy that never really stopped, give or take a war or two. As a deep-diver in the world of silent film I can see the influence of the original The Cat and the Canary on this play not to mention the romantic comedies of Ivor Novello, the loaded direction of an Ernst Lubitsch and the flapper energies of Colleen Moore. There was so much invention at this time and broadening of cultural opportunities...

I don’t know much about Ben Travers but he, along with PG Wodehouse, would have set templates that are still being mined and this play is very much what you’d expect a “farce” to be: witty, clipped wordplay, delivered at speed with no let up from start to finish. In the hands of director Matthew Parker, Travers’ play becomes a Hi-NRG romp, with machine-gun diction and a cast that carries on with expression even when they have no lines… exactly like a silent movie! It’s like a competition, a free-form exhibition – no doubt highly rehearsed – of movement, expression, pantomime and even vocalise: when the butler’s name is called, it’s almost sung, “Hoooo-ook!!” whilst the bizarre maid at the supposedly haunted house, Mrs Death (called Jones, for obvious reasons…) lets out a sequence of strange, foreboding moans.

On top of this you had an audience whooping and laughing almost constantly throughout the play: they were having a ball and that provides more eloquent comment than my words could convey.

There was also dancing and Beyoncé too! At the end of the first act the cast suddenly started dancing as a jazzed version of Crazy in Love boomed out of the speakers. This was unexpected but before we had time to react it got funnier as one by one the troop began stepping out. The icing on the cake was Lionel Frush (Alexander Hopwood) gurning his way in the middle of the women but the 10 Strictly points go to Isabella Hayward whose Cherry Buck was the jazziest baby and has early had extensive experience of the Charleston and possibly the Black Bottom too.

Farces can seem thrown together, but they require discipline and perfect control of space and time: those doors won’t open by themselves and the plot lines won’t tangle without due diligence and all the players and pieces fell exactly where they had to tonight.

As Matthew has said in interview, the men tend to be the idiots whilst the women are far smarter, but the beauty of the writing is that everyone finds their way on the end as gentile society is lampooned for the amusement of all.

The young cast clearly relished the chance to play “period” comedy but the writing is smart and the feel is very contemporary: it was a knowing decade. Having seen so many silent comedies even the play on words for “queer, very queer…” echoes a title card in Hitchcock’s’ The Lodger in which the famously gay Ivor Novello’s character is knowingly referred to as a queer fellow and that’s nothing compared to William Haines cheeky male-bottom pinching in Spring Fever: the twenties saw the beginning of liberation for all.

Indeed, the play’s very foundation point is marital infidelity as Sir Hector Benbow (Mathijs Swarte) starts the ball rolling by inviting Cherry Buck, a young window dresser he had met in London, for dinner at his house whilst his wife is away. Sadly for him, not only does Lady Benbow (Charlotte Vassell) announce her unexpected return at precisely the same time as his naughty tryst but so does Mrs Frush (Ellie Gill) and her son.

The Frusts had bought a country house, Thark, from Sir Hector who was acting on behalf of his ward, Kitty Stratton (Natalia Lewis) who also happens to be romantically entwined with his nephew Ronald (Robin Blell) … Needless to say, every relationship is quickly up for grabs with lie piling upon lie as Sir Hector tries to get the hapless Ronald to meet Cherry only for Kitty to get the wrong end of the stick and that stick to be swung in both men’s general direction.

It’s almost by way of distraction that the men decide they need to prove Thark is a sound investment by sleeping in the most haunted part of this most haunted house. Cue things that go bump in the night and a grandstand finish.

Thark is a far cry from Matthew Parker’s last play, Brimstone and Treacle and it shows his comedy chops especially in his joyous cast. Everyone is lovable with Blell deserving special mention for his facial displays of contorted horror and his elaborate attempts to communicate new lies through mime. Daniel Casper plays the long-suffering servant Hook, who always takes the blame even when he has to put off seeing his new baby daughter. Sophia Lorenti has a double role as the Benbow’s maid as well as the aforementioned Death/Jones when she really takes flight.

Kieran Slade pops up as the journalist Whittle and it’s interesting to see that even in 1927, little time was had for this profession with Sir Hector’s preference is for shooting first before answering any questions.

Thark plays at The Drayton Arms Theatre in South Kensington until 6th January and tickets are available from the box office site.