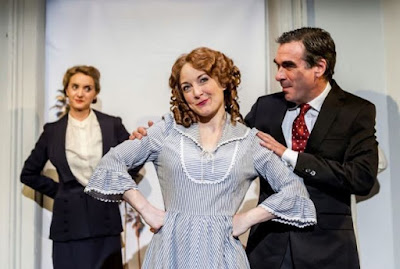 For the finale I was in close proximite to Sophie Linder-Lee and, blasting out a triumphal Workin’ in Flickers, she looked straight at me, completely in character and totally in the moment with a look of pure joy in celebrating performance and the legend of The Biograph Girl herself, Miss Mary Pickford. It’s dangerous being in the audience at the Finborough, you just might leap up and join in and, whatever else happens, you won’t fail to be uplifted!

Lillian Gish was in the audience at the Phoenix Theatre when Victor Spinetti’s original production opened in 1980. Silent film fascinates because whilst it is now almost out of human range it is so visibly still with us; giving us a chance to really see how our grand and great-grandparents lived. Cinema was not only a new medium it was also a new artform and from the very beginnings in the 1890s to the birth of bigger business in the 1900s, it struggled for legitimacy against traditional theatre and publishing. There’s been nothing like it since… at least until the world-wide web.

Composer David Heneker was born in 1906 and was old enough to remember the Great War years and the flourishing of the studio system that let to the increasingly commercialisation of film but the truth is that even in the noughties film was big business; it just hadn’t been tamed yet. Heneker is best known for writing Half A Sixpence and he also wrote Expresso Bongo (which I love).  The libretto has been revised for this production by its original co-writer Warner Brown and includes songs cut from the West End premiere production – so, this is a restored edition in silent film terminology…

In some ways Griffith is the tragic hero of The Biograph Girl, with both Mary and Lillian owing him a debt. Gish was certainly always very loyal but even she moved on, always acting on stage and in memorable films such as Night of the Hunter, The Unforgiven (1960) and her last screen appearance in 1987's Whales of August (at 94!), but DW was a Victorian soul bewildered by the post-war World let alone talkies. He did innovate and was certainly responsible for the consolidation of new technique in his ambitious films of which Intolerance more than the undoubtedly-tainted BoaN can be regarded as the definitive statement.

Based on a true story, with more than a few pragmatic liberties for the silent nerd to spot… The Biograph Girl sings us through the heart-warming story of how these mighty talents helped create the motion-picture world we still inhabit from every wall-mounted flat screen to the mini-cinema in our pockets. It’s quite literally A Star is Born as, in the early days, the performers weren’t named and even Gladys Smith/Mary Pickford was initially only known only as The Biograph Girl.

It’s 1912 and we join the Gish family, Momma (Nova Skipp), Dorothy (Lauren Chinery) and Lillian (Emily Langham who has something of Lil's febrility) an itinerant theatrical family who are in New York and intent on seeing their old stage pal Gladys who’s making flickers. They meet a tall stern man, Mr Griffith (Jonathan Leinmuller) who talks in visionary terms of this new art form and tries to convince Lillian that it can be juts as effective in conveying "thought” as the theatre.

Their friend bounces into the room and it is Gladys no longer but the newly-named Mary who is earning $300 a week churning out one and two reelers for the Biograph Company run by Griffith. His assistant Rose is well played by Charlie Ryall and his money man Epping by Joshua C. Jackson and, for the silent film buff, it’s lovely to see one of the greatest cinematographers of all time, Billy Bitzer (Jason Morell) as part of the story he played a major part in making… who else kept cranking whilst descending over that massive set of Babylon?!

Griffith convinces the Gish’s that there’s worth in films and has a vision to make art features that take on serious subjects including his adaptation of The Clansman which, for him as a Southern Man, was historical fact (at least in this version). He is sincere and, like many a visionary, is driven by his own ways, leaving others to the highway. Rose, Epping and Bitzer keep him on course but he’s possessed.

Lillian becomes his perfect heroine – delicate, pretty but tough as anything; Gish was almost method in her submersion into character and it’s harder to think of any more challenging subject for an actress but Emily Langham does superbly well with a mix of the resolute vulnerability, unbreakable conviction and total honesty that made her subject so precious. Her voice is clear and true especially on Every Lady, Gish’s love song to Griffith’s leadership spirit… if Lilian sang, she would sound like this.

And, if we had historical record of Mary Pickford negotiating contracts with Adolph Zukor (Jason Morell too) then it would probably be very much like Sophie Linder-Lee. She’s the girl with the curls, 19 going on 12 but with a business head the equal of the head of Famous Players Laskey/Paramount and any other man in Hollywood. Pickford it was who drove the creation of United Artists – with Doug, Charlie and DW – and who continued to produce well into the 50’s…

Linde-Lee catches her spirit and especially her charm; street smart but caring too. It’s a nuanced characterisation of a complex woman and, again, if we could hear Mary sing… she would have Linde-Lee’s ass-kicking exuberance!  I Like to be the Way I am in My Own Front Parlour: of course she does!

The pace is fast and content so high – from Matthew Cavendish excellent Sennett skit – slapstick, and the full-Buster right in front of us! – to the delicious harmonies of Put it in the Tissue Paper, sung with elegant poignance by Cavendish, Linder-Lee and Emily Langham - my favourite song of the night. Jonathan Leinmuller is well cast as the visionary Griffith, a man who cannot update himself and gets left behind by the change and the people he helped make…

I can understand why Lillian Gish cried seeing that debut performance, Mary had died the year before and she was always loyal to “Mr Griffith”  in spite of the pounding he got for Birth and his slow dissolve out of fashion. But… there’s that shot in Intolerance, as Billy Bitzer’s camera descends from on high over a cast of thousands… that’s genius and that’s the movies!


The Biograph Girl plays on at the Finborough until Saturday 9th June and I would get in quick if you want to pick uptickets!!

IthankyouTheatre Rating: **** Some of the most important figures in cinema brought to life with much vibrancy, some great tunes and enough energy to light that big sign on the hill.
Posted by Ithankyou at 02:59