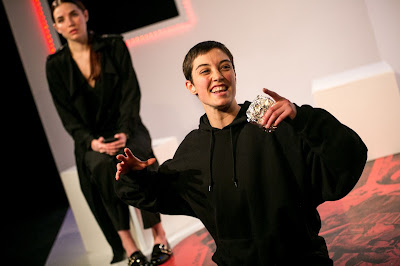 The tag for this play is “Post-Weinstein. Post-Spacey. Pre-Preston.” Each case is its own thing and we struggle to absorb the facts depending on our existing opinion of the alleged abuser. Pity us “fans” that hardship but what about the families of these (mostly) men?

Liv Warden’s play is concerned with the three daughters of a powerful abuser, film mogul Philip Preston and in her programme notes she confirms the inspiration from the Weinstein case, especially the harrowing tape of his meeting a starlet in his hotel, but also the subsequent reaction as the World soon forgot its guilt and doubled down on electing a misogynistic President and even this week, we saw right-wing commentators justifying verbal abuse of female MPs.

This is never over and in the case of the play not even being born into wealth and privilege is enough to protect Preston’s three daughters from what Warden terms “the destruction, inherited pain, reputation and loyalty” they have to live with. What can you do if your father is a serial abuser, sexually violent and used to using his power to get away with it for almost all of your life?

We don’t get to meet Mr Preston and the only other male voices are recordings from meetings or phone calls and that’s cleverly done as it leaves the focus entirely on the three sisters and the three actors who give them quite startling life, two of whom, rather incredibly, are making their stage debut.

Piper is the oldest and, appropriately enough is played by Natasha Cowley who has been in productions at the Globe and National Theatre whilst younger sisters Penny, Katherine Samuelson, and Polly, Alice Handoll are recent theatrical graduates. The three combine to mesmeric effect as they un-wind following the devastating revelations of their father’s assault on their mother. The assault makes the news and it seems like finally Philip’s crimes will catch up with him.

Piper and Penny have the most to lose with the former in charge of Preston International and the latter a actress propelled by Dad’s leverage into stardom. Piper is the control freak, the most intellectually aggressive and a chip off the old block who marries her childhood sweetheart and then ignores him in preference for the addictions of the business. Penny is in a whirlwind of objectification and at one point the board members try to use a sex tape of her to blackmail Piper… the men are disgusting, relishing the tape and the power it gives them.

But the Prestons have a secret weapon… Polly, a recovering addict who has escape from rehab to come and see if her mother is OK. The elder siblings’ reflex is to defend their father, family first and Prestons Together (mostly) and Penny tells one interviewer that his actions were “reactive” … the language of obfuscation in a World denied clear meaning. But Polly has no time for this and tweets “F*ck Mel Gibson, f*ck Johnny Depp and f*ck Philip Preston!”

Naturally the press love this and so do “we” who feed them… but Polly is only concerned with breaking free of a life twisted by the wrong kind of fatherly attention. When she was five, she caught her father with their French au pair, Manon and he slashed her across the face, over the eyes, with his belt causing her to lose a week at school. Her father’s fame coloured the school’s view of the injuries which were described as an “anomaly” not requiring further attention.

As the full extend of Philip’s abuse is gradually revealed a secret the three have hidden has to be confronted – he is the anomaly and his behaviour is consistent.

The play is superbly wrought by director Adam Small who uses the Red Lion’s intimacy to good affect by having all three women on stage at the same time, held in their moments, posing for the cameras, crying, or silently roaring with grief as they take turns in confronting the full horror of their lives.

The actors played things very tight, the two eldest sisters movements controlled and evocative of their roles but Alice Handoll roams across the stage, pushing the fourth wall with confidence and holding the gaze of the shocked audience. Katherine Samuelson shed real tears as her character’s sadness finally overwhelms and Natasha Cowley’s depiction of iron woman Pippa’s collapse was just as devastating… a very powerful three-hander with each deftly passing the narrative "baton" during a measured build-up of tension as the full truth is revealed.

Anomaly continues at the Old Red Lion until 2nd February and I strongly urge you to see it. Details on the website.

IThankYouTheatre Rating: **** A play for today. 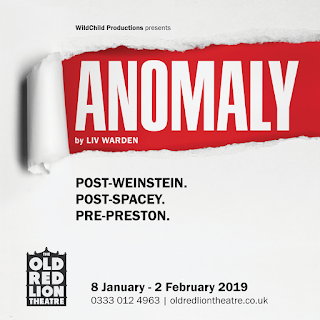