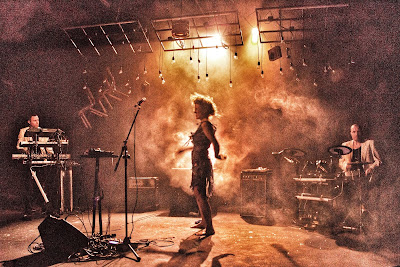 "I grieve for the woman I once was, naïve, open-hearted…”

Part gig, part theatre, the electro-musical Greek tragedy we’ve all been waiting for even though we never expected it… Mella Faye blew our socks off and set them alight as we watched in stunned silence. Like so much of London’s “fringe” theatre the Pleasance specialises in surprise and invention unfettered by the same commercial concerns of the West End – not that they don’t need a plentiful paying audience! But it’s the spectacularly unusual shows such as Pecho Mama's Medea Electronica that will ensure that the theatrically-curious will find their way to this superb complex nestled between Camden and Islington.

The play combined the buzz of both – a knowing and expertly-constructed musical populated by the kind of rare grooves you could have heard in the Electric Ballroom or Dingwalls, coupled with the theatrical verve of Upper Street.  Mella Faye’s voice carries a deliciously folky catch in the throat and is like a rougher-edged Liz Fraser, especially with ethereal double-tracking as she emotes over Alex Stanford synths and Sam Cox’s electric percussion. The three are indeed a band, called Pecho Mama, and to prove it they were even selling t-shirts and CDs afterwards.

Their music is so precisely of a period that I’d guess at 1982-85 even though I’d been expecting something a little more 1989, this was a deep groove to explore from an era when synth pop re-invented the torch song with vocalists such as Marc Almond, Alison Moyet and Phil Oakey… full disclosure; I saw Heaven 17 a few weeks ago and they’re still mighty.
This period synth pop reflects the placing of Euripides' 431BC play in Thatcher’s Britain and the greed-is-good mentality of Medea’s husband, Jason East, who seems to have gone off the rails following the death of his father. He spends an increasing amount of time away from home, working long hours and supposedly dealing with his grief.

The family had moved from London to Bedfordshire and Medea has her hands full with their two young children Michael and Peter, especially the former who struggles to adapt to his new school. There’s a lot of love on show and the sound design from Simon Booth is superb as Mella Faye acts to disembodied pre-recorded voices with seamless conviction.

Jason’s true reasons for his absence are soon painfully evident as is his plan to disengage his wife from his life and family… but, this is a play based on a Greek tragedy and his wife, as she warns, will make him wish he’d never met her.
It’s a simple but powerful story that is told boldly and with so much invention, working as an electro-pop-opera with fascinating music as well as drama - a splendid platform for Mella Faye’s singing, acting and mime. It’s a primeval storyline with no modern compromise but, as Faye says, it invites the audience to be on Medea’s side and, despite the things she does, we do indeed want “to will her on, and to want her to succeed.” Is that just the music talking or are we still emotionally “Greek” in response to base betrayal?

Medea Electronica runs at the Pleasance until Sunday 23rd February 2019 before continuing elsewhere in the UK and abroad - full details are on the band/theatre company’s website.

IThankYou Theatre rating: ***** You won’t see anything quite like this all year: dramatically different and you will want to buy the album too!